Arasen Stadion is a purpose built football stadium located in the Norwegian city of Lillestrøm, which is east of the country’s capital, Oslo. Home to Tippeligaen side Lillestrøm SK, the 12,250 capacity ground is owned by the club itself, and was last expanded between 1999-2002.

Written section to be added in due course. 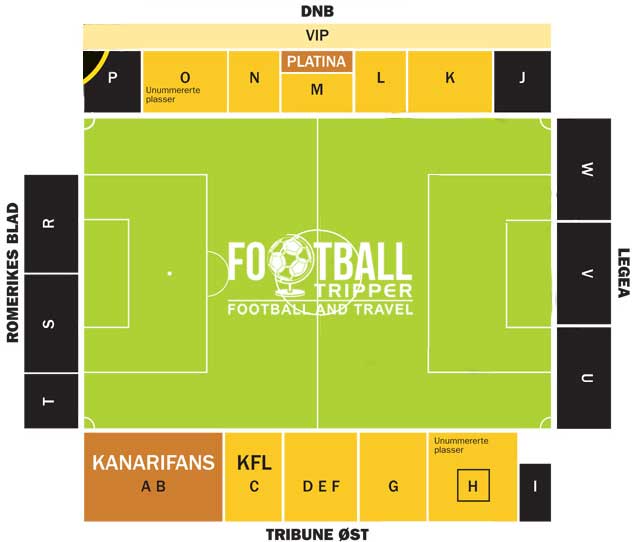 Away fans are usually housed within the northern-goal end which is known as the “Legea-Tribunen Bortesupportere”. Tickets cost 200 NOK for adults and 100 for everyone else such as children, students and seniors.

The LSK Fan shop at Arasen Stadium is open for three hours once a week on Saturday between 12.00 pm and 3.00 pm, however fans can arrange to purchase official merchandise by contacting the office which is usually open Monday to Friday.

On matchdays the club shop is guaranteed to be open for at least two hours before kick-off, and failing this you can always visit Lillestrøm’s online store.

It doesn’t appear as if Lillestrøm currently offer tours of their famous Åråsen Stadion.

How to buy Lillestrom Tickets

Tickets to see Lillestrøm play at home can either be purchased online from the official website or from the stadium. You can pick up tickets from the office during the week or purchase them from the dedicated ticket-booths specifically open on matchdays.

How to get to Arasen Stadion

There is a large car park behind the main stand which is partially shared with the car dealership.

Lillestrøm Station is regarded as the main transport hub for eastern parts of Greater Oslo, and actually forms one of the stops on Norway’s oldest railway line. There are numerous express trains to Oslo, Trondheim and even Stockholm.

Oslo International Airport can be found just over 30km north of the city centre along the E6 and E16 stretches of motorway. Upon landing you can catch an Express train which stops at both Oslo and Lillestrøm.

Within the city centre there is the likes of Best Western and Thon Hotel however if the truth be told there aren’t actually many places to stay in Lillestrøm central – you may be better off catching the train to Oslo!

Who plays at Arasen Stadion?

Norwegian side Lillestrom play their home matches at Arasen Stadion.

What is the capacity of Arasen Stadion?

As of 2023 Arasen Stadion has an official seating capacity of 12,250 for Football matches.

When was Arasen Stadion opened?

Arasen Stadion officially opened in 1951 and is home to Lillestrom

Covid Restrictions may be in place when you visit Arasen Stadion in 2023. Please visit the official website of Lillestrom for full information on changes due to the Coronavirus.