Viking Stadion is 2004 built football stadium located in the Norwegian city of Stavanger which is the third-largest metropolitan area in the country. Built at an estimated cost of €20 million, the 16,600 capacity ground is home to Tippeligaen side Viking Fotballklubb.

Viking Stadium first opened on 1st May 2004 after a construction period of approximately 17 months. Designed by NBBJ Design and LINK signatur AS, the stadium cost a total of 210 million NOK to build however the land on which it was built was gifted to Viking FK by the local council which effectively wiped off 50 million NOK from the total building cost.

The record attendance of 16,600 was set  on 24th June during the 2007 Tippeligaen season in a match against occasional title rivals Brann. With plans to eventually expand the ground to 22,000 this record could well be beaten in the long term, however as of 2012 further expansion has not been found to be viable.

Below is a seating plan of Viking FK's SR-Bank Arena: 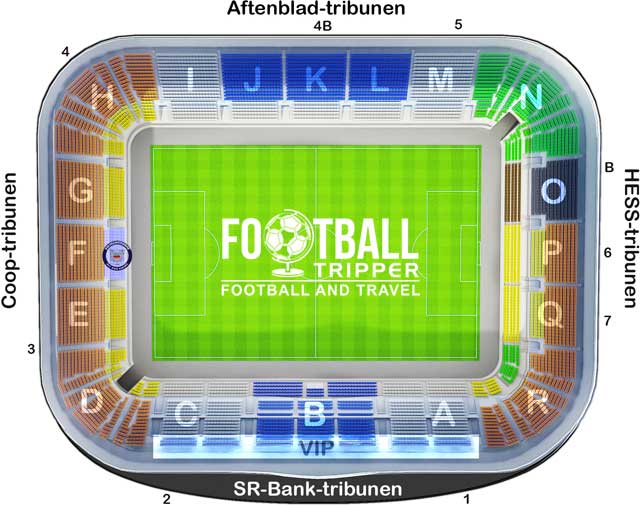 Away fans (Bortesupportere) appear to be housed within Sector O of the Hess-tribunen which if our calculations are correct is located within the south-west corner behind the goal.

Viking FK operate a club shop at the stadium in addition to their own online store which is accessible from the official website.

On matchdays the Viking Store is open from 2.00 pm until kick-off and then again for 30 minutes after the full time whistle.

It doesn’t appear as if any tours are available of the facilities at the mighty Viking Stadion.

How to buy Viking FK Tickets

Tickets to see the Vikings play at home can be purchased online in advance or from the ticket booths at the stadium which typically open for up to 90 minutes before kick-off.

Please refer to the above seating plan to see exactly where the sections correspond to see within the ground.

How to get to SR-Bank Arena

Where is SR-Bank Arena?

Viking Stadion is situated out of town within the area of Jåttåvågen which is 7.5 km south of Stavanger city centre.

The stadium is served by Jåttåvågveien Station which is three stops away from Stavanger Central Station and very scenic as the track stretches around the coast.

Stavanger Airport is located in Sola 13.5 km south-west of the city centre and less than 10 km from Viking Stadion. Ground transportation is in the form of coaches as the airport doesn’t sit on the railway line.

You won’t find any accommodation options at Viking Stadium which means you will have to hop on the train back towards Stavanger Central. Here there is the familiar names of Park Inn by Radisson, Comfort Hotel and Best Western amongst many other places to stay.

Who plays at SR-Bank Arena?

What is the capacity of SR-Bank Arena?

As of 2022 SR-Bank Arena has an official seating capacity of 16,600 for Football matches.

When was SR-Bank Arena opened?

What is the postcode for SR-Bank Arena?

Covid Restrictions may be in place when you visit SR-Bank Arena in 2022. Please visit the official website of Viking FK for full information on changes due to the Coronavirus.