Ullevaal Stadion is a purpose built football stadium located in the Capital city of Norway. With a capacity of 28,000, the ground is the largest in the country and subsequently is used by the national football team, and each year for the Norwegian Cup Final. It is also home to Tippeligaen team Vålerenga Fotball.

Ullevaal Stadion first opened on the 26th September 1926 with an inaugural match between resident side FK Lyn, and visitors Örgryte. Initially capable of accommodating 35,000 fans, stadium featured an athletics track around the outside of the pitch and was financed though a mixture of private and public funds which resulted in the Municipality of Aker owning 24% and FK Lyn 73.5%.

The Football Association began to purchase shares of the stadium from Aker in the 1930s and from Lyn in 1945, and by 1948 Ullevaal began to host the the Annual Cup Final at Ullevaal. Home to the Norwegian National Team since 1927, the record attendance of 35,495 was set during an early Nordic Derby between Norway and Sweden back in 1935.

The current form of Ullevaal Stadium is the result of construction work which dates back to the 1980s. The 8,800 capacity West Stand was constructed in 1985, and it was later joined by two new stands which opened in 1990. Most recently a new south stand was erected in 1998 to form a seamless U-shape. This not only increased the amount of executive facilities but increased the ground’s capacity to 28,000.

After FK Lyn were relegated from the Norwegian Premier League in 2009, they announced that they would be leaving Ullevaal Stadion after 84 years at the stadium having being residents since it first opened in 1926. Whilst attendances was one factor, the real reason was costs as one match at Ullevaal cost the same as one season at the recently renovated Bislett Stadion.

As for the future of Ullevaal Stadion there has been plans since at least 2005 to replace the West Stand to not only straighten the stadium’s asymmetrical appearance but to increase the capacity to 30,500. With a new stadium built in similar proportions to the others, there are suggestions that a retractable roof could then be fitted which would be a very welcome addition due to Norway’s notoriously cold climate.

Below is a seating plan of Valerenga's Ullevaal Stadion: 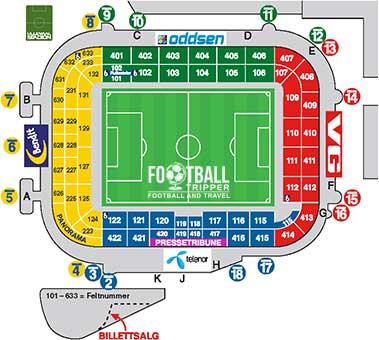 When Scotland played Norway in a 2010 World Cup qualifier back in August 2009, the Tartan Army were allocated an estimated 2,200 tickets which is a fraction under 10% of Ullevaal’s total capacity.

There are numerous friendly places to drink overlooking the bay although on average expect to pay a bit more than usual for a pint.

The stadium’s store known as the Ullevaal Sentrum is located in the north-east corner of the stadium and is usually open weekdays between 9.00 am – 7.00 pm.

Tours of the facilities at Ullevaal are either available on their own, as part of a museum pass or as as part of a matchday package for the full stadium experience. Stadium tours cost 400,- pr for adults and 250 for children although it does depend on which option you choose.

To book your place on the stadium tour and to find out availability you can send an email to [email protected] or phone the office on 23 00 83 07.

How to buy Valerenga Tickets

Tickets for domestic Norwegian matches can either be purchased online or in person from the Soccer Shop which is located at the stadium. The dedicated box office is usually open up to three hours before kick-off on matchdays.

International tickets should always be purchased in advance via your national football association.

How to get to Ullevaal Stadion

Where is Ullevaal Stadion?

Stadion Ullevaal sits 4.8 km or so north of Oslo city centre which make sit walk able for those brave fans in just over 1 hour.

There is a car park underneath the northern stand which is capable of accommodating up to 600 vehicles per matchay.

Ullevaal Stadion has its own stop which can be reached by Metro numbers 3, 4 and 6.

The city is served by no less than three airports however for most international visitors Oslo Airport is all you will need to know. Whilst 47km away, it does make up for this by offering the most extensive number of routes into Europe.

Ullevaal Stadion has its own place to stay known as the Thon Hotel.

Who plays at Ullevaal Stadion?

Norwegian side Valerenga play their home matches at Ullevaal Stadion.

What is the capacity of Ullevaal Stadion?

As of 2023 Ullevaal Stadion has an official seating capacity of 28,000 for Football matches.

When was Ullevaal Stadion opened?

Ullevaal Stadion officially opened in 1926 and is home to Valerenga

What is the postcode for Ullevaal Stadion?

The postcode for Ullevaal Stadion is 0840.

Covid Restrictions may be in place when you visit Ullevaal Stadion in 2023. Please visit the official website of Valerenga for full information on changes due to the Coronavirus.