Telia Parken known as Parken Stadium is the largest football ground in Denmark and is home to Danish Superliga team FC Copenhagen and the National Football Team. With a capacity of 38,065, the 1992 built ground is rated as a four star stadium by UEFA.

Telia Parken was built over a two year period between 1990 to 1992 to replace Denmark’s ageing national stadium Idrætsparken which first opened back in 1911. Constructed on the exactly same site of the former Parken, three out of four original stands were rebuilt which cost an estimated €85.3 million euros.

Finance came from investors Baltica Finans, who later sold the stadium to F.C Copenhagen in 1998 who had been using Telia Parken as their home ground since it first opened.

The inaugural match was held on the 9th September 1992 between Denmark and Germany with the national team coming off of a brilliant victory at the Euro 1992 tournament held in neighbouring Sweden.

The game subsequently attracted a large crowd of 40,500 which has only been bettered by two qualification matches since including one crunch game against Nordic rivals Sweden in 2007 where the game was abandoned when the referee was attacked.

Designated as one of UEFA’s four star stadium’s, Parken is too small to host the Champions League final but was big enough to host the 1994 Cup Winners’ Cup Final between Arsenal and Italian side Parma.

Most recently renovated in 2009, Telia Parken is set to become one of the venues for the Euro 2020 tournament which will be held across 13 different countries in a one off to celebrate the tournaments 60th Birthday.

With Telia Parken currently capable of welcoming just over 38,000 and only selling out a handful of fixtures each season, it’s hard to see FC Copenhagen’s stadium expanding any time soon.

Denmark’s national ground already enjoys a strong reputation internationally, as it regularly features in European competitions such as the Champions League and Europa league matches.

Below is a seating plan of FC Copenhagen & Denmark's Parken: 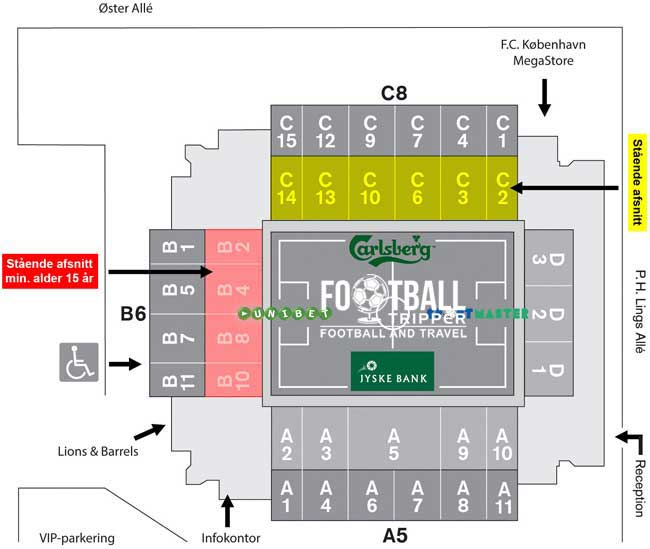 Away Fans are housed within seating section D1 which is essentially in the north-east corner of Telia Parken.

Referred to as Udehold which means “Away Team”, travelling supporters are sat next to the family section and opposite the much larger south stand which houses the most passionate and noisy FC Copenhagen supporters.

Copenhagen is a lively city with plenty of pubs within the city centre which is where most football fans tend to drink before heading to the match.

FC København operate two club stores: one at Telia Parken along Øster Allé 56 north-west corner of the ground, and one at the club’s training ground at Peter Bangs Vej 139. In addition, fans can also purchase official merchandise from their official online store which is known as the FCK Megastore.

Stadium tours of Telia Parken can be arranged by sending an email to [email protected] Contact the stadium to find out available dates, tour sizes and costs.

Tickets to see FC Copenhagen in action at Stadion Parken can either be purchased online from the official website or in person from the ticket office on matchdays although there is a price increase of 40.00 DKK per ticket to offset the increased operation costs.


Children are defined as Under 14, and are not permitted within the Fanzone.

With a large capacity of 38,065 domestic matches at Telia Parken rarely sells out, with the highest attendance during the 2014 season being 32,526 against Brøndby IF. Booking tickets in advanced is however advised for Champions League matches and in order to secure the best seats.

How to get to Parken

FC Copenhagen’s stadium sits 3.5 km north of the city centre within the neighbourhoods of Østerbro, just west of Nørrebro and Fælledparken. If your starting point is København or the city centre you can likely walk to Telia Parken within 35-40 minutes.

Telia Parken has very limited on-site parking with the main car park at the ground reserved for those who are in possession of VIP Parking passes. The closest road to the stadium Øster Allé has limited access on matchday which means you will have to park around Fælledparken’s residential areas.

The central station of Copenhagen is the largest railway station in Denmark, and is subsequently served by numerous domestic and international routes to cities such as Malmo , Hamburg and Berlin.

The closest train station to Telia Parken is therefore Østerport St which can be caught from the main station. Known as the S-Bahn line, the stop will leave you with a 10 minute walk.

Kastrup Airport is just 8 km from Copenhagen’s city centre, and is the largest international airport of all the Nordic countries by number of passengers served. It is a flight hub for international carriers as well as low cost airlines such as EasyJet, and Air Berlin.

Upon landing you can travel into the city centre by both train (12 minutes) and Copenhagen’s Metro system (14 minute), with the latter offering a more frequent service but no connection to the main station.

The closest place to stay to Stadion Parken is Hotel Rye just south of Oster Alle, however there’s predictably much more options back in the city centre. The area surrounding the railway station features the likes of First Hotel Excelsior, City Hotel Nebo and the reasonably priced Urban House.

Who plays at Parken?

What is the capacity of Parken?

As of 2023 Parken has an official seating capacity of 38,065 for Football matches.

When was Parken opened?

What is the postcode for Parken?

Covid Restrictions may be in place when you visit Parken in 2023. Please visit the official website of FC Copenhagen & Denmark for full information on changes due to the Coronavirus.