Home to the local team Randers FC which takes its name from the city, the ground has a current capacity of 10,300 and was recently renovated in 2012 to give it its current look.

The use of the land on which today’s AutoC Park currently sits at has been used to host football matches since at least 1961, when Randers FC constructed the first iteration of their home stadium.

Exactly 45 years after first opening, the club decided to demolish and completely rebuild the majority of their 20th century ground after it was becoming increasingly dated and expensive to maintain.

Designed by C. F. Møller Architects who were one of fifteen firms who collaborated on the design of the Olympic Village for the 2012 Olympics in London, the new Randers Stadium was constructed during the 2005-2006 season with the North Stand being the only section of the old ground not to be replaced, although it eventually would be six years later in 2012.

The newly constructed stadium has an official capacity of 10,300 which consists of 9,000 seats and 1,300 terrace places although unofficially it is believed that the ground can safely accommodate up to 13,500 fans.

The record attendance since 2006 was set on the 16th May when 11,824 fans attended the match against Brøndby IF, although with the old stadium the record stands at 17,200 for an international match.

The ground has historically being known as Randers Stadion but since the remodelling, the naming rights have been sold to two different companies, initially becoming the Essex Park Randers after the Danish real estate company.

After that deal expired, was known as AutoC Park Randers Stadion for a while and now BioNutria Park.

Below is a seating plan of Randers FC's Cepheus Park Randers: 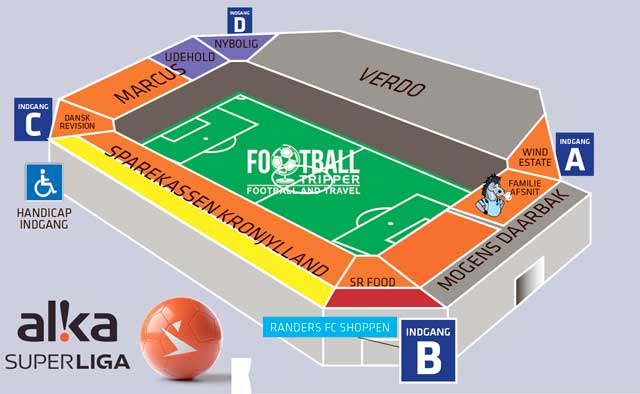 Away fans are housed within the south-west corner within the two purple sections Udehold and Nybolig which are capable of accommodating up to 800 visiting supporters per match. The entrance to the away section is granted through Indgang (gate) D.

Unfortunately it doesn’t appear as if Randers FC operate a full time club shop at the stadium which means you can only really browse the online store and physically pick-up souvenirs on matchdays.

It doesn’t seem as if there are any fan tours available of the facilities at Randers Stadion. Should this ever change we’ll be sure to update this section.

How to buy Randers FC Tickets

Tickets to see Randers FC In action can be purchased in one of three ways: online from the official website, from the club shop during the week and from the ticket booths around the ground on matchdays.

How to get to Cepheus Park Randers

Where is Cepheus Park Randers?

There are at least five car parks at the ground with the largest of the bunch located to the west of the ground just off of Viborgvej. Untarmacked, parking here operates on a first-come first-served basis.

The distance from Randers Railway Station is exactly 1 kilometre which means you’d be looking at a stroll of around 10 minutes which is good to know if you’re coming from out of town.

The two closest major airports to Randers are Aarhus (45 km) and Karup (75 km). If you’re travelling from outside of Denmark you may have to transfer at Copenhagen Airport which is 230 km away to the south-east.

The most conveniently placed hotel at a glance appears to be the Best Western just outside the station, however the location comes at a premium which many aren’t willing to pay – myself included.

Within the ring-roaded central area you will find Hotel Randers and Stephansens Hotel which are much more affordable accommodation options.

Who plays at Cepheus Park Randers?

What is the capacity of Cepheus Park Randers?

As of 2023 Cepheus Park Randers has an official seating capacity of 10,300 for Football matches.

When was Cepheus Park Randers opened?

What is the postcode for Cepheus Park Randers?

The postcode for Cepheus Park Randers is 8920.

Covid Restrictions may be in place when you visit Cepheus Park Randers in 2023. Please visit the official website of Randers FC for full information on changes due to the Coronavirus.