Nordjyske Arena or Energi Nord Arena for reasons of sponsorship is a purpose built football stadium located in the 4th large city in Denmark, Aalborg. Home to AaB Fodbold who take their name from the city they’re from, their ground has a capacity of 13,997 after expansion took place in 2002.

Today’s Nordjyske Arena is located on the site of the  former Aalborg Stadion stadium complex. Dating as far back as 1920 when Aalborg Stadium consisted of just a single 300 seated grandstand, an accidental fire broke out in 1960 destroying the existing wooden structures, inadvertently helping to clear the path for a modern sports facilities.

With the local municipal of Aalborg recognising the importance of the previous sports facilities to the city, a new 20,000 concrete stadium was constructed in 1963, with two additional sports halls constructed in 1986 and 1991 in order to accommodate a variety of sports besides football. In 2002, the football stadium was completely renovated giving AaB Fodbold’s stadium its current form.

Most notably the renovation saw all of the stands covered by a roof, whereas previously only the grandstand receiving coverage with the seating arrangement reconfigured to give the Arena it’s current capacity. The maximum capacity for league games is 13,800 which includes 7,800 seats and for international matches sanctioned by FIFA or UEFA the terraces can be converted to seating resulting in a capacity of around 10,500.

Five years after opening Aab Football sold the naming rights of Aalborg Stadion to Energy North becoming the Energi Nord Arena until the 31st December 2011. More recently, the rights were sold to Nordjyske Media who have signed a three year deal to rename the stadium to the Nordjyske Arena.

The ground regularly hosts International matches with September 2004 hosting a  Euro 2005 qualifier between Denmark and Belgium’s Woman’s teams  the first of such games since renovation occurred.

Below is a seating plan of Aab's Aalborg Portland Park: 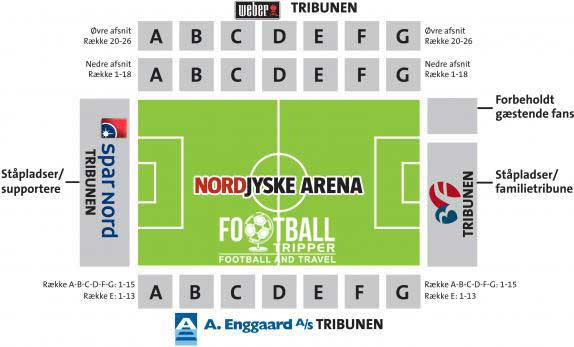 Away fans are housed within the northern half of the east stand which sits behind the goal. The terrace reportedly provides enough room for up to 1,000 visiting supporters.

Within the south stand (Enggaard Tribune) there the AaB café, and at every corner at the stadium there is a food and beverage outlet as well as some located centrally within each grandstands.

It doesn’t appear if there are any stadium tours currently available of the facilities at Nordjyske Arena. We’re not sure if this is something that will ever change.

How to buy Aab Tickets

Tickets to see AaB Fodbold play at home can be purchased online from various links on the official website, and in person from the various ticket sales points which specifically open on matchdays.

Whether standing behind the goals or seating in the main stand most tickets appear to be priced at 125.00 kr each including booking fee.

How to get to Aalborg Portland Park

Where is Aalborg Portland Park?

Nordjyske Arena is located 1.6 km west of Aalborg city centre – or at least the area which Google Maps defines as the centre.

Whilst there is a small car park behind the north stand its access on matchdays is restricted to guests of the clubs which means you will have to contend with street parking.

The closest railway station to the stadium is Aalborg Vestby however if you’re already in central Aalborg then it’s pretty much irrelevant as you’d have to walk all the way back to Aaalborg Station at Kildeparken.

Aalborg Airport is located 11 km north-west of the city centre across the river towards the area of Vadum.

It’s not the biggest of airports but does have flights to a number of European destinations including London-Gatwick, Amsterdam and Barcelona.

Whilst there are a few independently run B&Bs within close proximity of the ground it’s hard to compare to other options as they don’t have the same visibility on local maps which compare hotels.

Two of the more affordable options you may wish to check out are Prinsen Hotel and Park Hotel which are outside Aalborg station along Prinsensgade which is town side. The Phoenix Hotel along the Vesterbro is also another safe place to stay with its three star rating.

Who plays at Aalborg Portland Park?

What is the capacity of Aalborg Portland Park?

As of 2022 Aalborg Portland Park has an official seating capacity of 13,997 for Football matches.

When was Aalborg Portland Park opened?

What is the postcode for Aalborg Portland Park?

The postcode for Aalborg Portland Park is 9000.

Covid Restrictions may be in place when you visit Aalborg Portland Park in 2022. Please visit the official website of Aab for full information on changes due to the Coronavirus.