Viborg Stadion or Energi Viborg Arena is the 9,566 capacity home ground of Viborg FF who gained promotion to the Danish Superliga after being crowned Champions of the 1st Division during the 2015 season.

The current iteration of Viborg Stadion dates back to 2001 when the ground was more or less entirely rebuilt at a cost of 62.1 million kr, however the sites usage to host football matches dates as far back as 1931.

For a short while the ground was known as the Energi Viborg Arena for reasons of sponsorship however it is usually referred to as just the Viborg Stadion or Arena by supporters.

It was one of four stadiums used to host matches of the 2011 Under 21s Euro Championship which was held across Denmark. As well as hosting three Group matches, it hosted the semi final between Spain and Belarus which went to extra time.

Below is a seating plan of Viborg FF's Energi Viborg Arena: 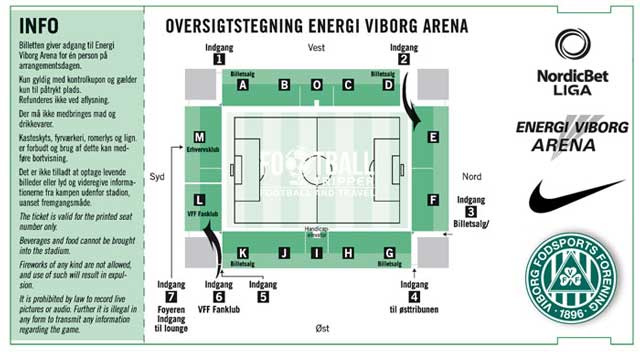 Away fans are housed within Section E/F of the Nord Stand which is the northern goal-end, with tickets priced at 120 DKK for adults and 60 DKK for everybody else.

Fans can purchase official merchandise from Energi Viborg Arena on matchdays however there’s nothing on the website to suggest that the fan shop is open during the week.

It doesn’t seem as if Viborg currently offer guided tours of their stadium. Maybe this will change in the future if the club establish themselves in the top-flight of Danish football.

How to buy Viborg FF Tickets

Tickets to see Viborg FF play at home can be purchased via the usual channels including telephone (86 60 10 66), online from the official website and in person at the various ticket booths at the ground.

On matchdays the ticket booths generally open from up to 60 minutes before kick-off.

How to get to Energi Viborg Arena

Where is Energi Viborg Arena?

Energi Viborg Arena is centrally located within the city less than 1 mile from both the main commercial area and the railway station.

There are three or so car parks located on-site once you arrive at Viborg’s ground plus parking at VIA University College Campus however the exact matchday parking arrangements are unclear.

The closest major airport is Karup Airport which is 29 km south west of Viborg’s city centre. For International flights you may find that Aarhus (97 km) and Aalborg (98 km) offer a better range of airline and flight routes.

The two main accommodation options within Viborg are Oasen i Viborg centrum and Best Western Palads Hotel which are both located between the stadium and the station.

Who plays at Energi Viborg Arena?

What is the capacity of Energi Viborg Arena?

As of 2023 Energi Viborg Arena has an official seating capacity of 9,566 for Football matches.

When was Energi Viborg Arena opened?

What is the postcode for Energi Viborg Arena?

The postcode for Energi Viborg Arena is 8800.

Covid Restrictions may be in place when you visit Energi Viborg Arena in 2023. Please visit the official website of Viborg FF for full information on changes due to the Coronavirus.