Atletion or Ceres Park is the name of the multi-purpose stadium within Aarhus Idrætspark in Denmark. Capable of seating just over 20,000 spectators per event, the ground is currently home to Aarhus Gymnastikforening who will play in the Danish Superliga during the 2016 season.

The original version of Ceres Park Stadion which dates back to 1920 was designed by Axel Høgh Hansen who was hired by the local municipality to create a multi-purpose sports venue for the city.

To this day Ceres Park retains an athletics track around the perimeter of the pitch which means it is one of only a handful of stadiums in the Danish Superliga and Danish 1st Division not to be purpose-built for football matches.

Home to local side AGF arhus, the highest level of football held at Atletion to date was undoubtedly the two qualification matches for Euro 2008. The Danish National team took on Liechtenstein and Spain after crowd trouble in a previous match against Sweden saw UEFA restrict the use of Telia Parken in Copenhagen.

The most significant renovations in the stadium’s history came in 1991 and then a decade later in 2001. The U-shaped stand was essentially rebuilt to modern specifications which included two-tiers of seating and a cantilevered roof.

For a short while the stadium became known as the NRGI Arena after the naming rights were sold to a local energy company. It is now more commonly referred to as Atletion or Ceres Park.

Below is a seating plan of AGF Aarhus's Ceres Park: 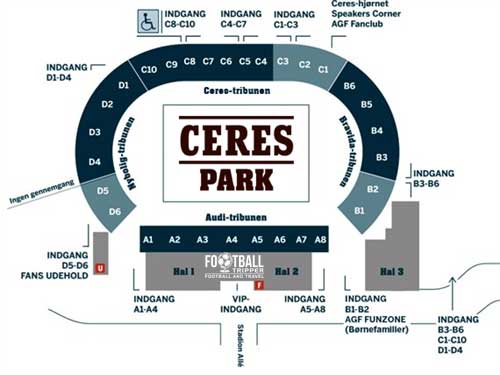 Away fans are housed within sections D5 and D6 which are essentially located in the north-east corner of the ground behind the eastern goal-end (the above seating plan is frustratingly south facing!). Combined these sections are capable of accommodating up to 1,306 visiting supporters per match.

There is a AGF Aarhus fan shop located at Ceres Park which is open on matchdays for a few hours before kick-off as well as during the working week.

You can also browse the range of official merchandise and purchase souvenirs from the club’s online store.

It doesn’t appear as if either the municipality of Aarhus or indeed AGF Aarhus currently offer guided tours of the facilities at Ceres Park.

How to buy AGF Aarhus Tickets

Tickets to see AGF play at home can be purchased in advance of the match online and from the Aarhus Elites Ticket Office, or before kick-off from the various ticket booths dotted around the stadium.

Please note that there is a surcharge of 10 kroner when purchased before kick-off to help offset the extra staffing costs. Remember to always book online to save money.

How to get to Ceres Park

Where is Ceres Park?

Ceres Park is located on the outskirts of town adjacent to Mindeparken approximately 3.8 km south of Aarhus city centre.

There are 640 free parking spaces located within the wider sports complex (Idrætspark) which operate on a first-come first-served basis on matchdays.

Aarhus Central Station is 2.4 km north of AGF Aarhus’ stadium which means the average Football Tripper can walk there in just under 30 minutes as previously mentioned.

The two closest major airports to the Ceres Park and the city are Aarhus (30 km ) and Karup (87 km).

The largest cluster of hotels are located in the area between Indre by and Latinerkvarteret with there being practically no options around Ceres Park.

Who plays at Ceres Park?

What is the capacity of Ceres Park?

As of 2023 Ceres Park has an official seating capacity of 20,032 for Football matches.

When was Ceres Park opened?

What is the postcode for Ceres Park?

Covid Restrictions may be in place when you visit Ceres Park in 2023. Please visit the official website of AGF Aarhus for full information on changes due to the Coronavirus.