Ashburton Grove, referred to as the Emirates Stadium for sponsorship reasons is the home of Arsenal Football Club following their departure from Highbury in 2006.

With the exception of Wembley Stadium, and bitter-rivals Tottenham’s new stadium, the Emirates Stadium is the largest in London with a capacity of 60,338.

Arsenal’s Emirates Stadium first opened in time for the 2006/2007 season, after hosting three non-capacity events in the summer in order to obtain its license.

The first event was a shareholder open day, the second was an open training session which attracted 20,000 fans, and the third was a testimonial match against Ajax for club icon Dennis Bergkamp on 22nd July 2006.

Described by Arsène Wenger as “the biggest decision in Arsenal’s history”, the club’s hand was essentially forced by Islington Council following on from the tragic events of Hillsborough.

By the 1994-1995 season all top-flight English clubs had to convert their stadiums from terracing to seating, and in doing so Arsenal’s Highbury’s capacity was reduced from 57,000 to just under 40,000.

Costing £20 million for the redevelopments, with the knock-on effect of reduced matchday revenue, the club explored the possibility of expansion but it was abandoned after rejection from local residents and the problematic nature of the Grade II listed Art-Deco East Stand.

Falling further behind great rivals, Manchester United, who had almost doubled their gate receipts after Old Trafford’s expansion in 1997, Arsenal soon realised that they had to build their own stadium, and by 1999 identified a site for what would become The Emirates Stadium at Ashburton Grove, 500m away from Highbury.

Despite initial protestation from some Islington residents Arsenal were given the all-clear by July 2002, with construction taking around 4 years.

Receiving no public subsidy for the relocation move, The Emirates was entirely privately funded through a mixture of player sales, bonds, naming rights and bank loans.

View of The Emirates

Below is a seating plan of Arsenal's The Emirates: 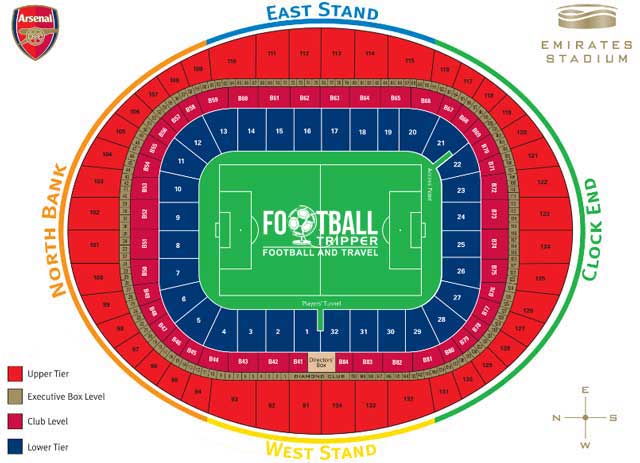 The Emirates is a modern “bowl” which means each stand has the same number of tiers and is continuous around the pitch.

The four sections have inherited the names of the stands at Highbury: The North Bank, East Stand, The Clock End (South) and the West Stand which houses the club’s main facilities.

The Emirates Away End

Away fans who make the trip to Arsenal are housed within the lower corner of the section between the south and east stands.

The standard allocation for league matches is 3,000 but it is normally increased for FA Cup matches where there is expected to be a more generous split.

With generous amounts of leg room. the incline of the stands isn’t particularly steep which means that some of the seats feel slightly further away from the pitch then they should.

The Emirates is sometimes maligned for it’s lack of atmosphere, but in reality it isn’t any better or worse than any other large stadium which attracts it’s share of football tourists.

Once you are inside the the ground after passing through the “electronic turnstile” which scans your ticket, you’ll likely find that the away concourse isn’t the most spacious. Food and drinks can also seem pricey however that’s part for the course in a) London and b) a new stadium.

The main stretch of tarmac containing the highest number of pubs is Holloway Road where there are decent choices without being too conspicuously Arsenal unlike elsewhere in Islington.

There is the likes of the Horatia -“Bustling boozer”, Metro Holloway – “Spacious bar & Courtyard with Pizza” and The Coronet – “Pub in converted Cinema”, all of which have their own individual charms.

East of the stadium on Highbury Grove there is the Highbury Barn Tavern and The Gunners Supporter Bar which has lots of memorabilia, with many regarding Drayton Park Arms as the unofficial away supporters bar meaning that predictably it gets busy on matchdays.

Again, Holloway Road is where most of the nearby dining options are found with the likes of a Greggs, Costa, Sainsbury’s local and even a McDonalds.

Inside the Emirates fans are also well catered for food wise, however prices are regarded as some of the most expensive in English football.

If you are not too bothered about eating/drinking close to Arsenal’s stadium then you could always just stick with the places within your train station.

The club shop AKA the Armoury is located on the Holloway road side of the stadium and with the exception of the Arsenal Online Store is the best place to purchase official merchandise from.

The store is located on the western side of the stadium, and it has the following opening hours:

You wouldn’t expect Arsenal football club to miss this trick, and indeed they haven’t, with fans even able to get a personally guided tour by the likes of Charlie George and Lee Dixon.

The museum is also open at similar times, with it’s closing occurring 30 minutes after the last tour in order for you to take in both parts of the Emirates Experience.

Note: There are no tours on Matchdays or from 1.00 pm the day before European fixtures.

How to buy Arsenal Tickets

Tickets for Arsenal football club are in high demand, so much so that there’s even talks of expanding the capacity of The Emirates. This would certainly be impressive if this was ever to happen.

As is usual, the club’s official website (see useful links) is the best source to buy tickets, although you may have to join Arsenal supports group to be in with a chance of getting them.

Failing this you could always use third-party resellers, although you may pay a few pounds above the ticket’s official value they are generally a safe and secure way of obtaining a ticket.

How to get to The Emirates

Where is The Emirates?

The Emirates Stadium is located in Islington, North London, approximately half a mile away from the club’s former stadium, Highbury.

Driving is not recommended, you should instead use London’s Underground system AKA the Tube.

The Emirates stadium’s address for satnav is as follows

The stadium is located in a largely residential area which runs an “extensive day parking scheme”.

This means that only residents with permits can park around the stadium on matchdays.

As one might expect from a major city London is particularly well equipped when it comes to train stations with over a dozen or so offering national services around the UK.

The closest train station to The Emirates is Finsbury Park which has Overground services from King’s Cross. It’s not quite as convenient as the tube however as you will have to walk a little bit further.

Public Transport of The Emirates

The closest tube station to the stadium is Holloway Road, which is situated on the Piccadilly line (The dark blue one) but during matchdays the Arsenal tube station is what the fans take as Holloway road is closed.

Originally known as Gillespie Road as depicted by the tiles near the platform. This was renamed in 1932 for Highbury and is the only tube station named after a football club.

Depending on where you’re flying in from there are six airports which are often sold as being “flights to London”.

Hotels Near The Emirates

Don’t feel you have to stay that close to The Emirates as there is great transport infrastructure in the city.

Who plays at The Emirates?

English side Arsenal play their home matches at The Emirates.

What is the capacity of The Emirates?

As of 2023 The Emirates has an official seating capacity of 60,338 for Football matches.

When was The Emirates opened?

The Emirates officially opened in 2006 and is home to Arsenal

What is the postcode for The Emirates?

The postcode for The Emirates is N7 7AJ.

Covid Restrictions may be in place when you visit The Emirates in 2023. Please visit the official website of Arsenal for full information on changes due to the Coronavirus.