The Stadium of Light is the home ground of Sunderland Association Football Club. With enough seats for 49,000 it boasts the fifth largest capacity of any stadium in England.

The ground’s name was chosen as a tribute to the regions proud industrial and mining heritage.

As was the case for a lot football teams in England after the publication of the Taylor Report in 1990, Sunderland were required to convert their stadium into an all-seater. This was in direct response to the tragic events of the “Hillsborough Disaster”, which saw the tragic death of 96 fans during an FA Cup semi-final match between Liverpool and Nottingham Forest.

At the time Sunderland were playing their home matches at Roker Park which first opened way back in 1897. Designed in a different era, the conversion to all-seating greatly reduced the capacity of the ground, and thus in order to make up for the matchday revenue shortfall, the ground would need to be expanded.

However due to Roker Park’s residential location, this would be impossible and thus Sunderland Chairman Bob Murray began to scout locations for a new stadium as early as 1991.

Eventually the Black Cats identified a location on the north bank of the River Wear, and the designers of the Amsterdam Arena, Ballast Wiltshier, were hired to draw up concept plans.

Initially proposed as a venue for Euro 96, planning permission was only granted in November 1995, and thus participation in the tournament was evidently too ambitious.

As was the proposed 49,000 capacity design, which was scaled back during construction, although this was later achieved in 2000 when the north stand was renovated.

Rather fittingly Ajax were invited to play the inaugural friendly match on the 30th July 1997, and ten years later to celebrate a decade at the Stadium of Light, the club held a friendly against Juventus on 6th August 2007.

View of Stadium of Light

Below is a seating plan of Sunderland's Stadium of Light: 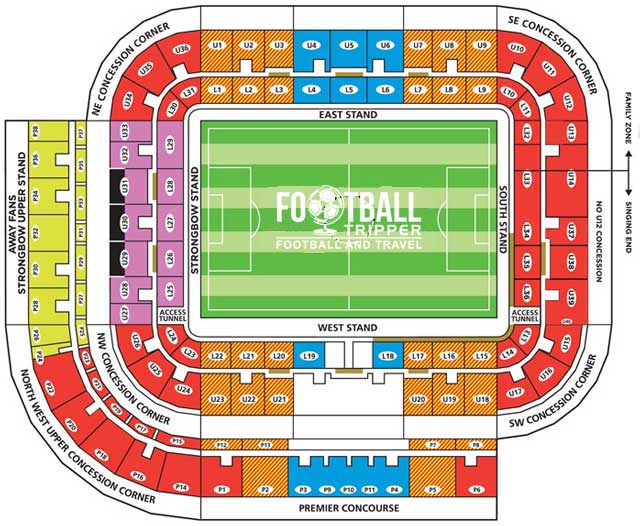 The stadium of light is comprised of the following four sections: The Stronbow Stand (North), The East Stand, The Fanily Stand (South) and the West Stand.

Stadium of Light Away End

Away fans are housed within the upper sections of seating within the North Stand similar to the away section at St James Park.

The standard allocation of tickets appears to be around 3,000 although it can be extended by up to three times as much – 9,000 for Cup matches.

Sat within the second and third tier, some of the seats suffer from restricted views due to the position of the roof. In most cases you can see the pitch however it can feel as if you’re watching the game through a letterbox!

The atmosphere is usually great on matchdays with the concourse offering well-priced snacks and drinks.

The Mackems are some of the friendliest fans in the country and it often rates as one of the top away days in English football.

Two popular matchday hangs out are The Victory Pub and The New Democratic Club which are on North Bridge Street just before you approach (and cross) Wearmouth Bridge.

Be warned though that they both get pretty rammed with fans from both Sunderland and the visiting set of supporters.

There is also The Wheatsheaf, Terminus, The Deaf Centre and Colliery Tavern.

Another option is the Albion pub which is five minutes off Roker avenue on a road called Victor Street, and failing this Harbour View on the seafront is an understated place where you can have a few drinks whilst overlooking the River Wear.

Just south of the River Wear on the Sunderland metro line is a heavily commercialised area which has a number of dining options within.

There is the likes of Nando’s, Subway and McDonalds in addition to several coffee shops and supermarkets.

Inside and around the Stadium of Light itself there are the usual options such as pies, fish & chips and sausage rolls which thanks to the northern location, are all reasonably priced.

Sunderland AFC operate three stores throughout the city in addition to their own official online store. The main club shop is at The Stadium of Light itself.

Tours of the Stadium of light are available throughout the year excluding matchdays and can be booked by phoning the tours hotline on 0871 911 1224.

The following prices are currently in effect:

How to buy Sunderland Tickets

If you’ve tried to buy football tickets before from official websites you’re probably more than aware that most clubs price tickets within three price brands.

This is also the case at Sunderland with the below adult prices.

Under 16s and concessions range between £10.00 – £15.00 depending on the profile of the match and you can book tickets either online, by phoning the hotline (0871 911 1973) or in person at the box office which is open similar times to the club store.

How to get to Stadium of Light

Where is Stadium of Light?

Stadium of Light sits less than 1 mile north of Sunderland’s city centre just across the River Wear Bridge. It can be walked to in just under 20 minutes.

Stadium of Light’s address for satnav is as follows:

When it comes to parking there is a limited amount available at the ground, and instead you’re advised to look elsewhere such as the nearby metro station or nearer the city centre which requires you to cross the Wearmouth Bridge.

Another option which is the free Park and Ride Scheme operating from Sunderland Enterprise Park just off of the A1231.

With buses running every 5 minutes for 90 minutes before and until everyone has gone home after kick off, this might be the best option for those not planning to make a weekend of it.

The Stadium of light is highly walkable from Sunderland’s train station at 15 minutes or so but if you want to, you can get to the stadium by using the metro line and getting off at either the Stadium of Light or St Peters station with the latter actually being nearer.

After the game has finished please note that each station will only go in one direction with the stadium of light going Northbound towards Newcastle and St Peters South back to the city centre.

Sunderland lacks its own airport which means the nearest is 23 miles away at Newcastle with a drive time a fraction under 40 minutes.

You can also jump on the Metro transit system which will take you there in just under an hour.

Hotels Near Stadium of Light

There is now a hotel at the stadium itself as well as a Travel Lodge and newly opened Premier Inn in the city centre (Thanks Joe Trait). There is also the Barclay Hotel which is across the Wearmouth Bridge.

Besides this, you’re faced with either heading east along the A183 to Sunderland Marina, or heading south to Sunderland city centre where there is the likes of Burton House and The Norfolk Hotel.

Who plays at Stadium of Light?

English side Sunderland play their home matches at Stadium of Light.

What is the capacity of Stadium of Light?

As of 2023 Stadium of Light has an official seating capacity of 49,000 for Football matches.

When was Stadium of Light opened?

What is the postcode for Stadium of Light?

The postcode for Stadium of Light is SR5 1SU.

Covid Restrictions may be in place when you visit Stadium of Light in 2023. Please visit the official website of Sunderland for full information on changes due to the Coronavirus.