Herman Vanderpoortenstadion also known as Het Lisp which is much more practical to say, is a multi-purpose football stadium located in Lier which belongs to the province of Antwerp. First opened in 1925, the 14,538 capacity ground is currently home to Belgian Pro League side Lierse S.K.

Lierse S.K’S home ground opened in 1925 under the name of Lisperstadion after the Lisp district of Lier with many fans unofficially still referring to the ground as Het Lisp today. Renamed in honour of Herman Vanderpoorten who served as the Mayor (Burgomaster) of Lier between 1982 – 1984 until he sadly died, the stadium’s namesake was famous for being a liberal politician who encouraged the establishment of the European Parliament in Strasbourg.

Throughout the 20th century, redevelopment of Vanderpoortenstadion has been a slow piecemeal process with the oldest stand still remaining today being constructed in 1965. This originally replaced a crumbling wooden structure, and at the turn of the millennium was modernised to become a fully covered grandstand with many fans regarding this to be the main stand as it houses the changing rooms and press facilities.

The remaining stands were constructed in the 1970s and 1980s, with the new concrete constructions replacing wooden frames which were similar to the former grandstand which was prioritised as needing to be replaced first. Most recent renovations have come in 2009 when the third stand, known by fans as the Mountain after being embedded within a landscaped hill, was competently rebuilt, with the secondary grandstand also demolished and rebuilt.

Today’s capacity is that of 14,538 which includes 4,311 terrace places, 522 business seats, 102 VIP places and 3  reserved boxes. Whilst Herman Vanderpoortenstadion has rarely welcomed European football, the 1997/1998 season was an exception when the Lierse SK defied all odds and made their way to the group stages of the Champions League. They failed to qualify but fans will definitely remember the likes of Monaco and Leverkusen visiting Het Lisp. 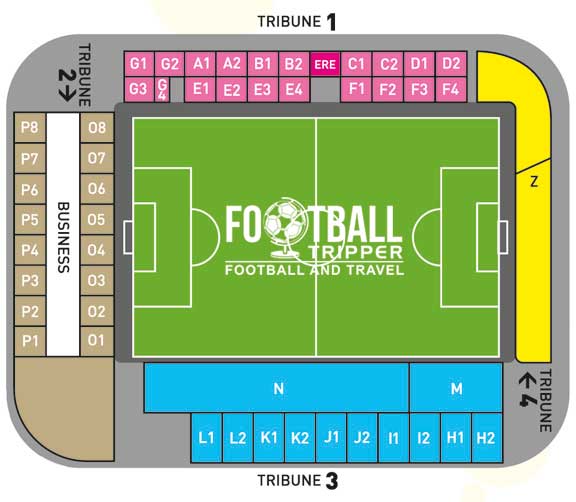