Cristal Arena or Fenixstadion as it is formally known as, is a multi-purpose sports arena located in the city of Genk located in North-East Belgium. First opened in 1999, the 25,000 capacity arena is home to Belgian Pro League side K.R.C. Genk, although the capacity is reduced to 21,500 for UEFA sanctioned matches.

KRC Genk’s stadium was built in 1999 independent of the Euro 2000 Championship and wasn’t actually involved with the tournament. The opening capacity of 25,000 which includes 4,200 terrace places behind the goal has proven to be well judged with the KRC Genk regularly attracting crowds of around 20,000 every fortnight including a handful of sellouts each season for the bigger matches.

Opening just before the turn of the millennium under the name of Fenix Stadion, it wasn’t until 2007 that Racing Genk’s ground was to become the Cristal Arena when brewers Alken-Maes purchased the naming rights to  and opted to name it after their pilsner Beer. This was the second instance of stadium name rights being sold in Belgium after KV Mechelen incorporated the sponsors name into Achter de Kazerne.

To date the Cristal Arena has hosted one international friendly against Slovenia and a World Cup qualifying match against Bosnia-Herzegovina for South Africa 2010.

As the fourth largest stadium in the country and second largest in the Belgian Pro League slightly behind Jan Breydelstadium shared by both Brugge teams and Standard Liege’s Stade de Sclessin the ground was a natural candidate, with more games expected to be hosted in the future.

As for the future of the stadium it was built with the requirement that it could be enlarged to a 40-45,000 capacity ground should Belgium ever need to host the World Cup alongside Netherlands but after their joint bid failed to make much of an impact for the 2018 tournament, it’s unlikely that Genk’s stadion will ever be expanded as there’s simply no need.

Below is a seating plan of Genk's Luminus Arena: 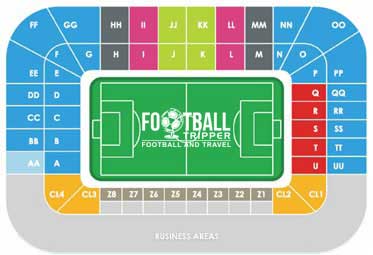 Away fans who make the trip to Cristal Arena are housed within section AA within the north-west corner of the ground.

This single section is separated from the home fans by a wall and a section of fencing, and it offers decent views of the pitch as it is located within the second tier.

KRC Genk operate a fan shop at the stadium which is supplemented by the merchandise on their official web store.

Stadium tours generally run on the first Saturday of every month and don’t need to be booked in advanced. All you have to do is turn up at GoalMine at 1.30 pm, and pay the bargain price of € 10.00 to gain a place on the tour.

You can find much more information and when the next open day/stadium tour is by visiting this website.

How to buy Genk Tickets

Tickets to see KRC Genk can either be purchased online from the club’s official website or in person from the ticket office during the week and providing the game hasn’t sold out – before kick-off.

Please note that ticket prices are divided into two categories with A matches costing an additional € 2.50 to purchase.

How to get to Luminus Arena

Where is Luminus Arena?

Cristal Arena is a modern football ground not only in appearance but also in location, with the stadium located some 5.4 km north of Genk city centre. It’s easy to see why K.R.C Genk organise several bus services to Cristal Arena every matchday.

There are a total of 10 car parks available in the surrounding area of Cristal Arena with this map on the official website providing a comprehensive break down of the allocations.

Genk railway station sits on line 21D as the final destination of an intercity service which departs from Blankeberge/Knokke and stops at Bruges, Ghent, Brussels, Leuven and Hasselt.

The closest major airport to the city of Genk is Maastricht Aachen Airport which is located 31 km away within the southernmost region of the Netherlands between Belgium and Germany.

Alternatively you have the International Airport in Liege, Belgium, which is only 51 km to the south of Genk.

Unfortunately you won’t find any suitable accommodation options directly around Cristal Arena with the majority of places to stay found back towards the centre of Genk.

Within close proximity to the railway station there is the Carbon Hotel, Hotel Esplanada, Hotel Ecu and the two star T Hert Hotel.

Who plays at Luminus Arena?

Belgian side Genk play their home matches at Luminus Arena.

What is the capacity of Luminus Arena?

As of 2023 Luminus Arena has an official seating capacity of 25,000 for Football matches.

When was Luminus Arena opened?

Luminus Arena officially opened in 1999 and is home to Genk

What is the postcode for Luminus Arena?

The postcode for Luminus Arena is 3600.

Covid Restrictions may be in place when you visit Luminus Arena in 2023. Please visit the official website of Genk for full information on changes due to the Coronavirus.