Daknamstadion is a purpose built football stadium located in the small village of Daknam within the municipality of Lokeren. Used primarily for the football matches of local team K.S.C. Lokeren Oost-Vlaanderen, the 1956 built stadium has a current capacity of 9,560 after undergoing renovations between 2000 – 2003.

Daknamstadion is the 1956 built home ground of Sporting Lokeren and it has undergone several remodels over the years including most recently in 2014 when the position of the south stand was changed in order to bring the pitch closer to the fans which increased the capacity from around 9,560 to 12,000 seats. At the same time, new state-of-the-art floodlights were added in time for the first match of the 2015 season against SV Zulte Waregem.

Sadly missing out on involvement in the Belgium co-hosted Euro 2000 tournament, Daknamstadion receive no state-funded renovations but nevertheless opted to improve facilities between 2000-2003 when the fences were removed between the pitches and the stands to improve spectator views.

A new artificial blend of grass fibres used at the likes of Parken Stadium and De Kuip, were also cultivated on the pitch which greatly improved the quality of the playing surface.

At Daknamstadion’s largest point in 1974, it could accommodate over 18,000 spectators and a match against FC Barcelona in the UEFA Cup sold out within minutes, prompting some to contemplate whether or not the capacity was too small. In fact, when Sporting Lokeren hosted Man City in the same competition in 2003, temporary seating was erected to fulfil the demand.

Still, based on regular attendances for matches of the Belgian Pro League it would have been foolish to expand Daknamstadion further and unless the club can secure Champions League football on an annual basis, it’s highly unlikely that fans of KSC Lokeren will ever see the ground’s capacity increase ever again. 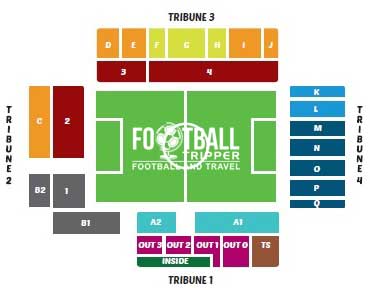 Away fans are housed within the north-west corner of Daknamstadion within sections B2 of the Tribune 2 goal-end and section and B1 which stretches around the corner flag to connected with the main stand known as tribune 1.

KSC Lokeren operate a fan shop at Daknamstadion in addition to their official online store.

It doesn’t appear as if tours are currently available of the facilities at Daknamstadion.

How to buy Lokeren Tickets

Tickets to see K.S.C. Lokeren play at home can be purchased online from the official website, in person from the club’s office during the week and from the various sales points around the stadium on matchdays.

Please note that there is a slight increase in ticket prices of a few euros when the big five visit Daknam: Anderlecht, Club Brugge, Standard Liege, AA Gent and KRC Genk. This is referred to as “Topwedstrijden”.

How to get to Daknamstadion

Sporting Lokeren’s stadium resides in district of Daknam which is 2.0 km north of the city centre and the area where the ground inherits its name from.

There are three fairly large car parks located just off of Daknamstraat at the ground with at least one of these operating on a first-come first-served basis on matchdays.

Lokeren Railway Station sits on the 57 and 59 railway lines which makes it well connected to the rest of the East Flanders rail network.

The two closest international airports to the city of Lokeren are in Antwerp (45 km) and Brussels (63 km).

There appears to be a real lack of accommodation options within the city of Lokeren with Bed and Breakfast Zeeldaaier and Hotel La Barakka being the pick of a very limited bunch of options.

Belgian side Lokeren play their home matches at Daknamstadion.

What is the capacity of Daknamstadion?

As of 2023 Daknamstadion has an official seating capacity of 9,560 for Football matches.

Daknamstadion officially opened in 1956 and is home to Lokeren

What is the postcode for Daknamstadion?

The postcode for Daknamstadion is 9160.

Covid Restrictions may be in place when you visit Daknamstadion in 2023. Please visit the official website of Lokeren for full information on changes due to the Coronavirus.