The King Baudouin Stadium, formerly known as Stade du Heysel, is the national sports stadium of Belgium, having regularly hosted football matches of the Belgian national team since opening on the 23rd August 1930

King Baudouin Stadium first opened on 23rd August 1930 under the name of Stude du Centenaire or Jubelstadion when it was capable of accommodating 70,000 supporters. Multi-purpose by design, the athletics track remains to this day however for a short while a wooden cycling track also encircled the perimeter of the pitch.

Erected to celebrate the 100th anniversary of Belgium, the new ground was inaugurated with an official football match against neighbours, the Netherlands. The stadium’s history has at times however been characterised by neglect, and most notable in 1985, disaster.

Renamed Stade du Heysel in 1946 after the area of Brussels it resides within, the 1985 European Cup Final between Juventus and Liverpool resulted in one of the most prominent sporting disasters in the 20th century.

Known simply as the Heysel Stadium disaster, 39 spectators – mostly Juventus supporters died due to a fatal combination of poor crowd control and ageing stadium facilities. The 1980s would prove to be a turning point in European football with the subsequent event of Hillsborough four years later changing the face of modern football forever.

Withdrawn as a suitable venue for football it wasn’t until a decade later in 1995 that Heysel Stadium was extensively renovated. Renamed in honour of King Baudouin who died two years previously, over $50 million was invested in modernising the facilities in-line with European stadiums in the wake of the Taylor Report in 1990.

Below is a seating plan of Belgium's King Baudouin Stadium: 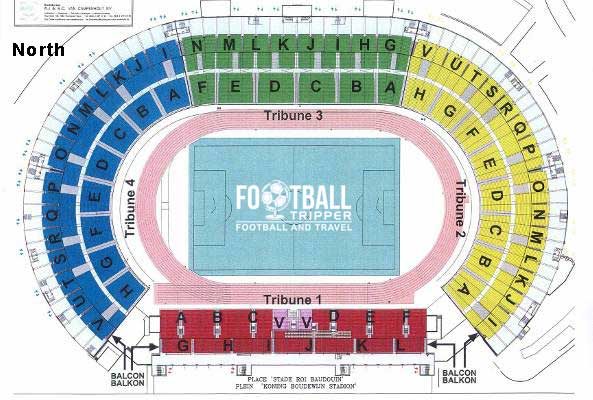 King Baudouin is comprised of a horseshoe shaped stand which spans three sides of the pitch and a separate main stand.

Away fans are usually housed within Tribune 2 which is the southernmost goal-end, and is often identified on maps as the yellow section of seating. Travelling supporters occupy fans sections A and B within the lower tier towards the main stand (Tribune 1).

When Wales played Belgium in a Euro 2016 qualifier back in November 2014 the standard allocation of away tickets appears to be 1,400 however depending on demand this can rise to 3,000.

The majority of bars are to be found back towards the city centre however that’s not to say that you can’t get a beer at the ground – there’s usually a fanzone outside the ground!

Costing just 6.00 for an adult and 4.00 for children, the Parcours découverte, Discovery Tour, stadium tours last approximately 60 minute and must be booked in advance via this online form.

How to buy Belgium Tickets

International tickets should be purchased through your country’s football federation/association. Be advised that you can never normally purchase them on the day of the match!

How to get to King Baudouin Stadium

Where is King Baudouin Stadium?

King Baudouin Stadium is located just under 6.0 k north of Brussels city centre within the neighbourhood of Heysel.

The easier way to travel to the stadium is undoubtedly via Brussels Metro system which consists of four metro and three premetro lines.

The stadium is served by two main stations: Roi Baudouin and Heysel which all sit on metro Line 2. metro lines.

Away fans are advised to get off at Houba-Brugmann Station as it is closest to Tribune 2.

As an international city there are numerous affordable accommodation options – indeed too many to mention here. Familiar names include the likes of Best Western, Holiday Inn and Hotel Ibis.

Who plays at King Baudouin Stadium?

What is the capacity of King Baudouin Stadium?

As of 2022 King Baudouin Stadium has an official seating capacity of 67,000 for Football matches.

When was King Baudouin Stadium opened?

What is the postcode for King Baudouin Stadium?

The postcode for King Baudouin Stadium is 1020.

Covid Restrictions may be in place when you visit King Baudouin Stadium in 2022. Please visit the official website of Belgium for full information on changes due to the Coronavirus.