Stade de France was built for the 1998 World Cup and it has been used as the National Football Stadium ever since.

Located in the capital city of Paris, the ground has a large capacity of 75,000 which makes it the sixth largest ground in Europe.

Stade de France was constructed as the centrepiece of the country’s successful bid to host the 1998 World Cup. In total, the stadium hosted 9 matches and bookended the tournament by hosting the opening match and the final.

Both matches featured Brazil who were the reigning World Champions, however they were unable to retain their title after suffering a 3-0 defeat against hosts France in a lacklustre performance.

Costing an estimated €290 million euros to build, construction of the project was contingent on France being awarded the World Cup, and thus the 31 month time frame for construction was at the time considered tight.

Construction began on 2nd May 1995 and officially opened three years later with a friendly match between France and Spain.

The post-World Cup Legacy of France’s national stadium is one which is pretty successfully. Continuing to host the annual Coupe de France, the 2009 edition between Guingamp and their Brittany rivals Rennes attracted a crowd of 80,832 which is a record for a domestic football match in the country.

Flaunting its credentials a multi-purpose stadium, Stade de France hosting the 2003 Athletic World Championships, and the Heineken Rugby Cup Final in 2010 however it continues to be largely synonymous with football across Europe.

This may be in small part due to the two Champions League finals it hosted in 2000 (Real Madrid v Valencia) and 2009 (Barcelona v Arsenal).

With France set to host Euro 2016, Stade de France will once again host the final of a major sporting event, as well as six other matches of various stages of the tournament.

Joining the neighbouring Parc des Princes, it will be one of the few stadiums which doesn’t need to undergo extensive renovation work.

Below is a seating plan of France's Stade de France: 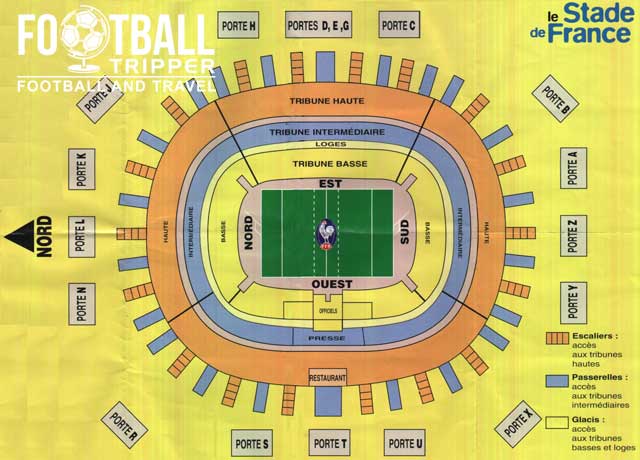 As Stade de France usually houses domestic matches where the ground is split evenly between both teams there isn’t really an away section per se.

Depending on how large the travelling contingent is expected to be, the additional blocks of seating within one of the goal-end can be allocated to away fans.

The city centre has a good number of Irish Pubs and Sports Bars, including some which are within close proximity to the city’s main railway station.

Formerly an industrial suburb, Saint-Denis has long since been gentrified and as a result there are good number of cafes, bars and restaurants around and en-route to Stade de France.

As there’s no resident club it’s all but impossible to have a club store located at the stadium.

On matchays there are however mobile merchandising units which are dotted around the stadium. At a minimum you can purchase a programme of the match!

Tours of the facilities at Stade de France are available to football fans and tourists thoughout the week.

How to get to Stade de France

Where is Stade de France?

Stade de France is located in the Parisian commune of Saint-Denis which is situated 9.4km north of the centre of Paris.

Due to a lack of parking available at the stadium and the congested nature of Paris Roads driving to Stade de France really isn’t recommended.

Located centrally within Northern France, Paris is well connected to the rest of Europe including the UK with high speed rail networks serving no less than 6 train stations within the city.

Depending on where you’re travelling from you’re likely to arrive at a different station, with each station generally serving the clock-wise area it is located within.

For example for trains to and from Belgium, the Netherlands, Germany (Cologne), and the United Kingdom (Eurostar) which is loosely defined as northern Europe you will arrive at Gare du Nord.

The nearest metro station is Saint-Denis – Porte de Paris which is situated on line 13 which is light blue in colour.

As an International City you might be unsurprised to know that Paris boasts three airports to it’s name:

Who plays at Stade de France?

What is the capacity of Stade de France?

As of 2023 Stade de France has an official seating capacity of 81,338 for Football matches.

When was Stade de France opened?

Covid Restrictions may be in place when you visit Stade de France in 2023. Please visit the official website of France for full information on changes due to the Coronavirus.