Stade Orange Vélodrome is the home stadium of Ligue 1 side Olympique de Marseille who play football in the south of France.

It is an exciting time for fans of the club as the ground will increase its capacity to approximately 70,000 for when the country hosts Euro 2016 following a successful competition bid.

Stade Vélodrome has its origins firstly in France’s 1938 World Cup bid and secondly in the management of Marseille’s believing that their current home, Stade de l’Huveaune, was too small.

The convergence of both these factors resulted in the constructed of  a then, state-of-the art 60,000 capacity stadium although the Vélodrome only hosted two matches in the World Cup.

Similar to how many stadiums across France have developed, the history of Stade Vélodrome is intertwined with the country’s successful bidding and hosting of major sporting events.

The 1984 Euros resulted in a first round of refurbishment for the ageing stadium, with host nation France triumphing in the tournament beating Portugal 3-2 at Stade Vélodrome en route to the final.

Further renovations occurred in the mid 90s when Olympique de Marseille’s stadium was practically rebuilt for the 1998 World Cup, with France once again triumphing on home soil, although the Vélodrome was criticised by some fans for its exposure to the elements and poor acoustics due to the lack of cover around the open stands.

The most recent renovation plans in time for the Euro 2016 tournament are expected to correct this fault, with an addition of a roof across all stands and an increased capacity to 67,000.

Finally, it is worth noting that Marseille’s Vélodrome is a multi-purpose arena and despite it’s associations with football, it also occasionally hosts matches of Rugby Club Toulon and the national rugby team. It was even used as one of the venues of the 2007 Rugby World Cup.

Below is a seating plan of Marseille's Orange Vélodrome: 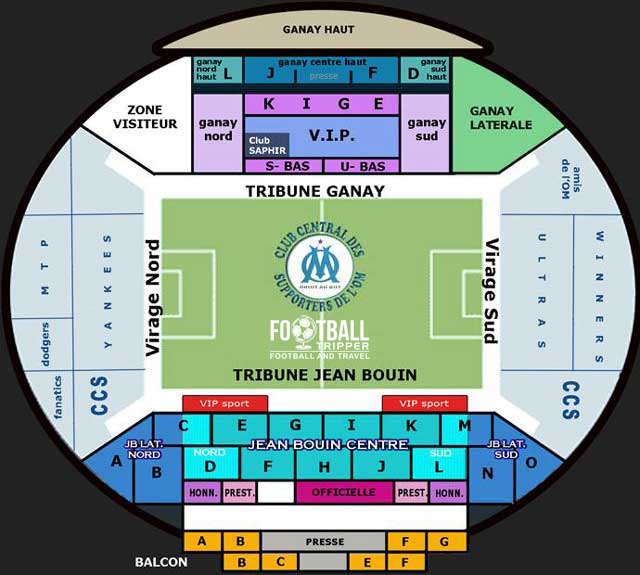 The Velodrome can be thought of as four stands: Nord, Est, Sud and Ouest.

Away fans who make the intimidating trip to Marseille’s backyard are housed within the north-east corner between the Virage Nord goal-end, and the Tribune Ganay which is the eastern grandstand.

The travelling contingent generally occupies the lower-tier which is inherited from the adjacent main stand with the club referring to this section as the Zone de Visiteur.

Famed for its great weather and outdoor culture, there are plenty of pleasant places to grab a pint from around the city with outdoor beer terraces very popular with locals.

The map below lists a few of the more football friendly pubs in the city, with bars located both north and south of the city centre.

Marseille was designated as the European Capital of Culture in 2013, and whether or not you attach gastronomy to this is entirely up to you.

Around the stadium there are numerous fast food options such as McDonald’s to the east, subway to the North and numerous Pizza places such as Pizzeria Del Giro and Pizzas La Marseillaise, in addition to more traditional French restaurants.

Olympique Marseille have three stores throughout the city which easily allows you to grab official club merchandise during your visit to the South of France, in addition to their official online store. The most popular one is located at the stadium itself.

There didn’t appear to be much obvious information on a stadium tour on the official website but other sources suggest that one does exist. The guided tour described as a “true privilege” takes in behind the scenes areas such as the dressing rooms, VIP boxes, the press room and pitchside via the players’ tunnel and the manager’s dugout.

The tour costs €10.00 for adults and €8.50 for children (under 18s) with tours apparently running every Wednesday, Saturday and Sunday, with more tours running during half term and holiday season.

How to buy Marseille Tickets

Tickets to see Marseille play at home can be purchased online, or in person at either the three official boutiques, at the designated ticket office at the stadium or at one of the many other ticket vendors such as Francebillet or Ticketnet.

Price wise, expect to pay between €30.00 to €90.00 for a decent seat along the main grand stand, and a maximum of €50.00 for behind the goal where the hardcore fans sit. As per usual, you will have to pay a slight premium for the highest profile matches.

Ticket prices for a seat at the main stand range from €30.00 to €90.00, and a seat at the lower opposite side costs €40.00. Expect to pay more for a few high-profile matches such as Le Classique against Paris Saint-Germain.

How to get to Orange Vélodrome

Where is Orange Vélodrome?

Stade Vélodrome can be found in the southern part of Marseille, around 4km away from Vieux-Port – Pointe Rouge which the seaside part of the historic centre.

If you are coming from the direction of the airport or North of the city, take the A55 towards Marseille and follow signs for the city centre. Once you are on this road, it shouldn’t take longer than 25 minutes.

There is a reasonable amount of on site parking located north of the ground which is available to use on matchdays at the price of a few euros.

This means that it is well connected to the rest of the country; you can reach Paris away in three hours for example and Lyon in just over 90 minutes.

To get to the stadium hope on to the red line 2 southbound, and look to get off at either Rond-Point du Prado (West of the Stadium) or Sainte-Marguerite Dromel (East). Both will leave you with a walk less than 5 minutes to the ground, it really is that easy.

The main airport for the city and the Alpes-Côte d’Azur region is Marseille Provence Airport which is located in Marignane. Approximately 27 km northwest of the city centre and Stade Vélodrome, the airport is the 5th busiest in France and the only non-Parisian one in the country which flies to the United States.

Once you have landed you can get to Marseille by taking either the shuttle bus service, a taxi or train. All options should take you no more than 30 minutes.

The closest and most reputable hotels to Stade Vélodrome are probably Hotel Mercure Marseille Prado and Hotel Le Corbusier but as the stadium is on the Metro track 2, it makes sense to choose a hotel near to a station on this line with either Notre Dame du Mont Cours Julien or Jules Guesde being two good reference points for your search.

If you want to play it safe and need to be near to Gare Saint-Charles then try the unfashionable Holiday Inn Express Marseille – Saint Charles or the plain looking Vertigo centre hotel.

Who plays at Orange Vélodrome?

French side Marseille play their home matches at Orange Vélodrome.

What is the capacity of Orange Vélodrome?

As of 2023 Orange Vélodrome has an official seating capacity of 67,394 for Football matches.

When was Orange Vélodrome opened?

Orange Vélodrome officially opened in 1937 and is home to Marseille

What is the postcode for Orange Vélodrome?

The postcode for Orange Vélodrome is 13008.

Covid Restrictions may be in place when you visit Orange Vélodrome in 2023. Please visit the official website of Marseille for full information on changes due to the Coronavirus.