Stade Geoffroy-Guichard is the home stadium of french side AS Saint-Étienne, although it has been billed as multipurpose as it often hosts rugby matches, most notably the 2007 Rugby World Cup.

The ground is currently undergoing renovations and as such has a reduced capacity of 26,757. Once complete, the stadium will be able to hold 40,000 fans.

AS Saint-Étienne’s stadium was constructed on a piece of land donated by its founding president and local entrepreneur Geoffroy Guichard in 1930.

Named after the the man who helped build the club, Stade Geoffroy-Guichard officially opened a year later on the 13th September 1931 in a disappointing defeat to AS Cannes with some sources putting the scoreline at either 9-1 or 8-3.

Originally consisting of a single stand of 800 seats, a few terraces and an athletics track surrounding the pitch,  the stadium today is barely recognisable compared to what it started out as due to the large number of renovations throughout the years, with the first coming in 1956 when running track was removed in a bid to become more like English football stadiums.

In 1968, the local council acquired ownership of the stadium and it was a positive move for the club with further renovations occurring including the construction of a new stand taking the capacity from around 30,000 to just under 40,000, and roofing for the two smaller stands behind the goal.

As has often been the driving force of change for French Stadiums, both the European Champions and World Cup contributed to modernisation of facilities for many clubs across France.

The 1984 Euros increased capacity to 48,270, the 1998 World Cup transitioned the stadium to all seating and the Euro 2016 promise further redevelopments to Saint-Étienne’s home, with the project being dubbed Le Nouveau Geoffroy-Guichard stadium.

Below is a seating plan of Saint-Étienne's Stade Geoffroy-Guichard: 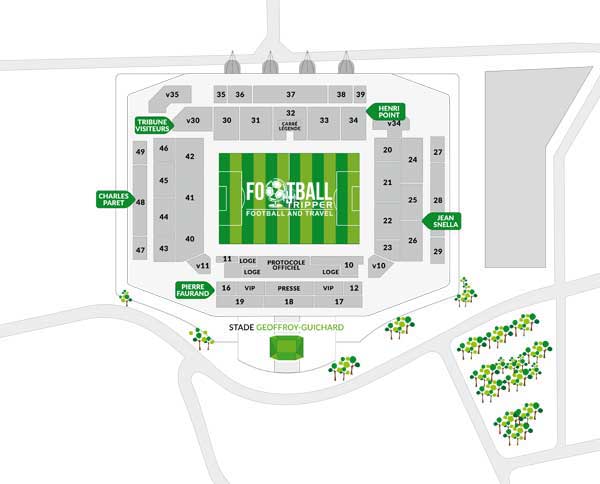 Away fans are housed within the north-east corner of Geoffroy Guichard in an area known as Tribune Visiteurs.

Located between the Kop Nord and the eastern grandstand, this section of the ground is fenced off from the home supporters and spans two-tiers in total. Both have unrestricted views of the action on the pitch.

The map below outlines some of the most fan-friendly pubs in local area, although perhaps unsurprisingly, the bulk of them are to be found within the city centre south of the stadium.

There are a few food outlets near the stadium such as Casino Cafeteria and Green Stade, although there are even more along Avenue de Verdun which is located along the T1 and T2 Tram line.

This long stretch of road essentially links up the stadium with the city centre and includes places such as Domino’s Pizza, Les Negociants, and Bol Appetit.

AS Saint-Étienne operate one 800m ² shop known as La Boutique Des Verts at the stadium in addition to their own online store.

The current version of Saint-Étienne’s stadium doesn’t offer fans the chance to go behind the scenes in a stadium tour, but there is a Museum which is worth checking out. Located at the stadium, Musée des Verts is a must see for any fan of football.

Note: Museum is closed on Mondays, and is usually open on the day of matches from 10am until kick off. For full information you can visit the site (above) or send an email to [email protected]

How to buy Saint-Étienne Tickets

Tickets to see Saint-Etienne can be purchased via the usual channels: Online, via the ticket hotline, at the stadium (in the week leading up to the match) or at various points throughout the city such as Francebillet and Ticketnet box offices.

With the exception of games against Lyon and the most high profile opposition, you should be able to purchase tickets on the day of the game although please be warned that there is no guarantee you will get tickets.

Price wise, expect to pay anywhere between €20.00 to €45.00 depending on where you sit, with seats behind the goal almost always the cheaper option.

How to get to Stade Geoffroy-Guichard

Where is Stade Geoffroy-Guichard?

Stade Geoffroy-Guichard is situated in the North of the city approximately 2.5km away from the historic city centre and main railway station.

Stade Geoffroy-Guichard is snuggled against the A72 motorway towards which makes driving a decent way  transport option. Look for the signs for the exit 13 Montreynaud/Technopole and then turn off towards the city.

The main train station in the city is Gare de Saint-Étienne-Châteaucreux (Châteaucreux) for short and it is 2.5km South of Stade Geoffroy-Guichard.

Connected to Paris and Lyon via high speed rail-lines, the city is very accessible from the rest of France, and you can get to the stadium by hopping on the number 9 bus outside the station.

Number 9 departs every 15 minutes and shouldn’t take you any longer than 10 minutes to get to Le Marais bus stop which is very close to the ground.

The city is served by the Saint-Étienne–Bouthéon Airport which is 12km North-West of the city centre. Located within the Rhône-Alpes région, it is mainly used by low-cost airlines which is good news for your wallet.

The closest hotels to Geoffroy-Guichard are probably ones North of the stadium, either on the A72 motorway or just north of it.

Whilst these are great if you have a car, they’re not really practical if you’re using public transport, meaning you’re much better off finding something towards the south nearer the station such as Ibis or Hotel Le National.

For the city centre try something like Hotel Continental or Saint-Etienne Centre, but as usual please don’t take my word for it and do your own research.

Who plays at Stade Geoffroy-Guichard?

French side Saint-Étienne play their home matches at Stade Geoffroy-Guichard.

What is the capacity of Stade Geoffroy-Guichard?

As of 2023 Stade Geoffroy-Guichard has an official seating capacity of 41,965 for Football matches.

When was Stade Geoffroy-Guichard opened?

What is the postcode for Stade Geoffroy-Guichard?

The postcode for Stade Geoffroy-Guichard is 42000.

Covid Restrictions may be in place when you visit Stade Geoffroy-Guichard in 2023. Please visit the official website of Saint-Étienne for full information on changes due to the Coronavirus.