Stade Bollaert-Delelis or Stade Félix-Bollaert as it was formerly known as, is the main sports venue in the Pas-de-Calais city of Lens.

Home to football team RC Lens, the 41,229 capacity ground has around 4,000 seats more than the city’s population, and is often used for rugby matches.

Stade Felix Bollaert first opened in 1933 and was originally named after the director of a local mining company who was instrumental in developing the local area’s interest in sport.

In 2012 it was announced that the stadium would be known as Stade Bollaeert-Delelis aftet the death of Andre Delelis who was the Minister of Commerce under President Francois Mitterrand who ran the country between 1981 to 1995.

Constructed very much in the traditional English mould of four distinct stands which are unattached, the current capacity of the ground is 41,229 which means that that similar to Villareal and Burnley, the capacity of the local stadium is larger than that of the nearest city’s population. The current population of Lens is estimated to be around 37,000.

The history of Racing Club de Lens’ stadium is basically intertwined with the country’s hosting of major sporting events with France hosting no less than three football tournaments and two Rugby World Cups.

Starting with Euro 1984 , Stade Felix Bollaert has received public funding which has allowed it to undergo renovation work in each of the preceding decade since the 1980s.

Most famously Stade Bollaert-Delelis hosted six matches of the 1998 World Cup including five group matches featuring the likes of England against Colombia, and a round of 16 between Paraguay and eventual winners France.

It is currently scheduled to host three group games of Euro 2016 and a round of 16 between the Winner of Group D and another 3rd place team.

As part of the preparation for the tournament there were plans to expand the ground’s capacity to 44,000 however the proposals were ultimately rejected after the estimated costs of increased by €20 million euros to €90 million – a figure which wasn’t deemed as a sustainable investment by the French tax payer.

Below is a seating plan of Lens's Stade Bollaert-Delelis: 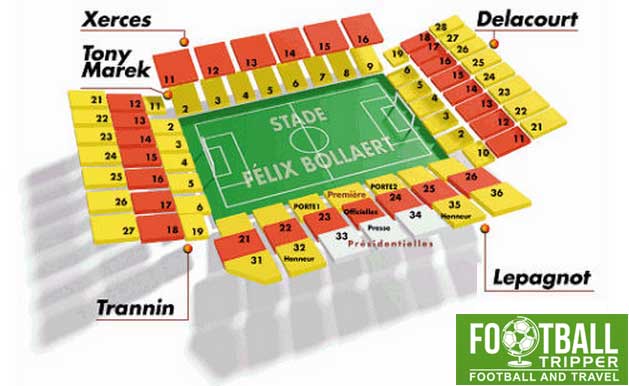 We’re not currently sure of where the away section is located, sorry.

As Stade Bollaert is located less than five minutes from both Lens city centre and the main railway station fans can grab a drink in a relaxed manner before making their way to the stadium.

In addition to the expected range of matchday grub on offer inside Felix-Bollaert there is a McDonald’s perched on the other side of the roundabout on Rue Maurice Carton, less than 2 minutes from the stadium itself. Predictably it can get very busy on matchdays!

RC Lens operate a club shop at the stadium’s main entrance known as Emotion Foot in addition to their official online store which also bears the same name.

It doesn’t appear as if RC Lens currently offer football fans and tourists the chance to see the facilities up close and personal as part of a stadium tour package. If this ever changes we’ll be sure to update this section.

How to buy Lens Tickets

Tickets to see RC Lens play football at home can be purchased through the typical channels such as online, in person at the ticket office at the stadium and from various resellers dotted around the city centre.

How to get to Stade Bollaert-Delelis

Stade Felix-Bollaert is situated less than 1km from what many would regard as the historic centre of Lens, with the resulting walk likely to take the average person well under 15 minutes.

Stade Bollaert is blessed with thousands of car park spaces north-east of the pitch ensuring that driving to the stadium is exceptionally easy. The largest car-park is accessible from Rue Mansart on Route de Bethune.

The main railway station of the city of the city Gare de lens sis located less than half a kilometre south-west of Stade Bollaert.

There are numerous accommodation options which tick the three major boxes of being close to the stadium, close to the train station and close to the city centre. They are Hotel de France, Hotel Le Jardin and Espace Bollaert.

Who plays at Stade Bollaert-Delelis?

French side Lens play their home matches at Stade Bollaert-Delelis.

What is the capacity of Stade Bollaert-Delelis?

As of 2023 Stade Bollaert-Delelis has an official seating capacity of 41,229 for Football matches.

When was Stade Bollaert-Delelis opened?

What is the postcode for Stade Bollaert-Delelis?

The postcode for Stade Bollaert-Delelis is 62300.

Covid Restrictions may be in place when you visit Stade Bollaert-Delelis in 2023. Please visit the official website of Lens for full information on changes due to the Coronavirus.