Stade du Hainaut is the new home stadium of Valenciennes FC, replacing Stade Nungesser on the 26th July 2011. The ground has room for 25,000 football fans but has the capacity for 10-15,000 more spectators in the event of a music concert or other non-sporting event, making it a true multiprocessor venue.

Before moving to Stade du Hainaut Valenciennes FC originally played at Stade Nungesser which first opened in 1930. Dating back to the early part of the 20th century, the facilities at Nungesser had become outdated, and instead of chasing their tale with short term renovation work, Valenciennes opted to build a completely new stadium.

When Valenciennes FC were crowned Champions of Ligue 2 during the 2005/2006 season the club were given further impetus to see the project through as Ligue 1 stadium requirements are much more stringent than the lower divisions. The city launched a design competition for the new stadium, and several architectural companies responded with the winning concept said to be a cross between the Allianz Arena and Estadio da Luz.

After identifying a plot of land east of the city centre construction began on 6th May 2008 and as completed three years later on the 26th July 2011. Stade du Hainaut was inaugurated with a narrow 1 nil victory against Borussia Dortmund in a friendly match which was witnessed by 22,778 fans. The opening game held the record attendance until 11th December 2012 when an additional 250 fans came to the match against Paris Saint-Germain.

Costing an estimated €75.9 million euro project, the overwhelming majority of the funding was derived from public sources. The local council of Valenciennes contributed €41 million euros of funding, and the wider Nord-Pas-de-Calais chipped in another €20 million leaving the football club to make up the remaining €15 million.

As a municipally owned stadium,  Stade du Hainaut was always envisioned as a multi-purpose sports arena for the city. Capable of hosting rugby matches, and outdoor concerts for 35,000 fans, the stadium follows the pattern of other new venues across Europe which are now than just football grounds.

Below is a seating plan of Valenciennes FC's Stade du Hainaut: 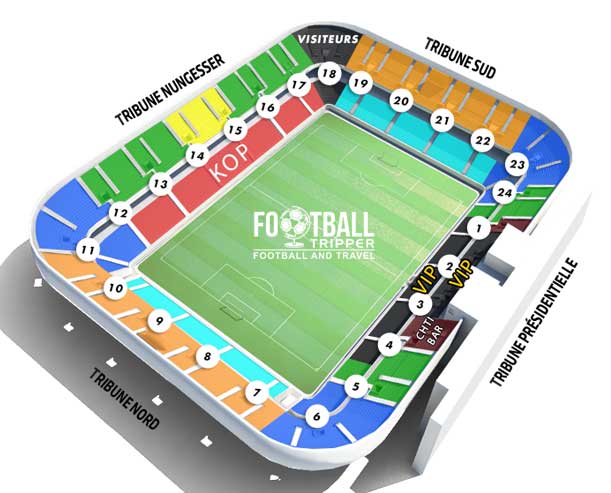 As a modern stadium, Stade du Hainaut is a venue to be proud of and the fully enclosed design ensures great acoustics, with the modern architecture permitting clear views throughout the stadium.

Valenciennes websites indicates that there are two official stores around the city in addition to their online boutique.

The club have a store within the centrally located shopping mall which is popular with residents of the city.

Located within Entrances G and H the store is accessible before you enter the stadium with your ticket.

You can undertake a fully guided 60 minute tour of the new Stade du Hainaut for around €6.00 which will take you into the glamorous world of football by granting you access to usually off-limits areas of the stadium such as the changing rooms, the players tunnel, the dugouts and other VIP areas.

To find out the availability of tour dates and to book your ticket, check out the official website of the stadium or phone 03 27 51 92 00.

How to buy Valenciennes FC Tickets

Tickets to see Valenciennes FC play can be purchased online, or in person at either of the club shops located in the city centre and the stadium itself. Even with a state of the art, 25,000 capacity, shiney-new stadium Les Athéniens rarely sell out their home fixtures which means you can purchase tickets either in the days leading up to the match or even just before kick-off if you like to live dangerously.

Ticket prices like the majority of French clubs are very affordable with the cheapest seats starting at €12.00 (Furthest away from the pitch, behind the goal) and most expensive being €40.00 (Central, main grandstand), with a slight premium to be added on when the biggest teams in Ligue 1 come to town such as PSG and Marseille.

How to get to Stade du Hainaut

Where is Stade du Hainaut?

Regardless of whether you are coming from East or West, you will need to travel along the A2 motorway to get to the stadium which runs south of the city. Once you are on it, take exit 21 and follow signs for Valenciennes centre ville, and then signs for Nungesser. Vague instructions I know but let’s face it, you’ll probably have a satnav anyway.

Note: Parking is usually reserved for Valenciennes and those with permits and it is encouraged that you use one of the free park and ride schemes known as  Parks Relais du Tramway. There five car parks to choose from such as Saint Vaast and the University, with your match ticket allowing you access onto the tram.

The closest international airport to little old Valenciennes is in Lille which is 55km away and is commonly reffered to as Lille-Lesquin Airport. An alternative choice and one which is much further away is Brussels South Charleroi Airport which is further away at 79km but may be more suitable for some based on availability of flights.

Who plays at Stade du Hainaut?

What is the capacity of Stade du Hainaut?

As of 2023 Stade du Hainaut has an official seating capacity of 25,000 for Football matches.

When was Stade du Hainaut opened?

Covid Restrictions may be in place when you visit Stade du Hainaut in 2023. Please visit the official website of Valenciennes FC for full information on changes due to the Coronavirus.