Stade des Costières is the home stadium of Ligue 2 staple team, Nîmes Olympique. Located between the Mediterranean Sea and the Cévennes mountains, the council owned ground first opened in 1989 and has a current capacity of a respectable 18,482.

Stade des Costières was constructed over a two year period between 1987 and 1989 in order to replace Nimes Olympique’s Parc des Sports which was beginning to show its age. First opened in 1919, the stadium was later renamed to Jean-Bouin and was demolished in 1997 after it had become dilapidated. The city of Nimes needed newer facilities, and thus a new municipally owned stadium was built.

Designed by Vittorio Gregotti, a Novara born architect  also lend at a hand to Barcelona’s Olympic Stadium, the Stade des Costières cost an estimated 160 million francs in total. Rectangular in shape, each stand was built individually in a staggered approach which was taken to minimise disruption however Nimes Olympique’s only moved in when it was fully completed.

The inaugural domstic match was held on 4th March 1989 against Montceau in Ligue 2. After a friendly between France and Holland on two weeks prior only 3,647 supporters attended Nimes’ first ever fixture. The record attendance by contrast was achieved during the 1991-1992 season against French giants Olympique Marseille which attracted 25,051 supporters.

Despite Nîmes Olympique competing in Ligue 2 for most of their history, many iconic players have graced the pitch at Stade des Costieres. Before Joining Leeds United and later on The Red Devils Eric Cantona played for Nimes during the 1991/1992 season, and on 16th December announced his retirement from international football. This was because he had received a 2 month suspension for throwing a ball at the referee during a home match!

A few years later on 21st February 1996 Nimes’ Stadium hosted a friendly between France and Greece in preparation for the Euros in England. A young Zinedine Zidane who played for Bordeaux at the time score en-route to a 3-1 victory. The highest level of club football played at the stadium has been the Cup Winners Cup in 1996 when Nimes defeated Budapest Honved before being knocked out of the competition by AIK Stockholm.

Below is a seating plan of Nîmes's Stade des Costières: 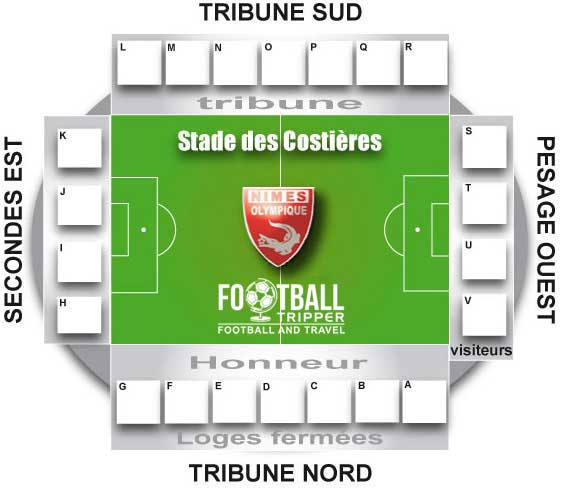 How to get to Stade des Costières

Where is Stade des Costières?

Who plays at Stade des Costières?

What is the capacity of Stade des Costières?

As of 2023 Stade des Costières has an official seating capacity of 18,482 for Football matches.

When was Stade des Costières opened?

Covid Restrictions may be in place when you visit Stade des Costières in 2023. Please visit the official website of Nîmes for full information on changes due to the Coronavirus.