Stade Auguste Bonal is the home stadium of FC Sochaux-Montbéliard located in the North east approximate quadrant of France, on the border of Switzerland. The ground has a capacity of approximately 20,000 and has undergone quite a few renovations since its original construction in 1931.

Stade Auguste Bonal has been the home of FC Sochaux-Montbéliard since 1931, and the stadium is older than quite a few clubs in France, such as Paris Saint-Germain who only founded in 1970. Before the creation of this ground, the club played at the René Blum Stade for three years between 1928 and 1931 but almost immediately outgrow the facilities as France became a nation swept up in Football fever, with the sport growing tremendously in popularity.

As Sochaux were founded by Jean-Pierre Peugeot, a prominent member of the Peugeot auto-mobile family, the owner used his connections to secure the football club a patch of land near to the factory, and it was from this location that the stadium received it’s original name of Stade de la Forge.

After the Second World War the name of the stadium was changed to Auguste Bonal, in honour of the former sports director of the club who was murdered by German officers after refusing to cooperate with them.

30 years later, the first renovation of Auguste Bonal commenced with most facilities getting a lick of paint and upgraded to more modern components which made for a more comfortable experience for fans. It wasn’t until the second renovation between 1997-2000 that Stade Bonal really began to catch up with other stadium’s in France with the configuration of every stand in the stadium over a 35 month period which resulted in an improved 20,000 capacity.

Famously, engineers were also able to install under soil heating on the pitch which is unique in France, as well as a new exterior façade which helped to bring both FC Sochaux-Montbéliard and Stade Auguste Bonal into the 21st century of Football.

Below is a seating plan of Sochaux's Stade Auguste Bonal: 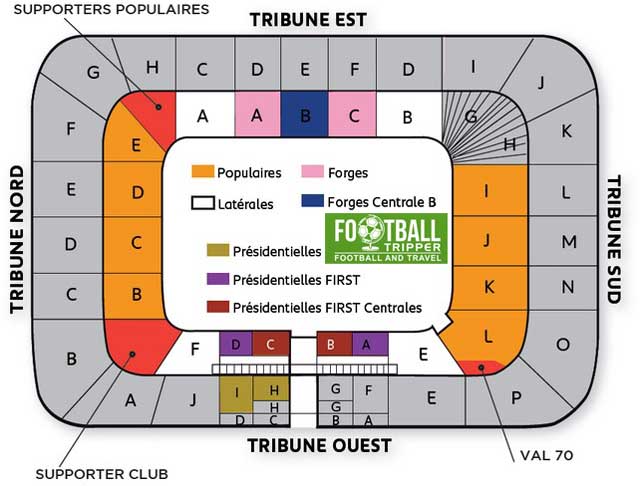 FC Sochaux-Montbéliard run an official boutique “Planète FCSM” at Stade Auguste Bonal as well as an online store of the same name.

Opened in 2002, the store located in the Northwest Stand of the stadium has over 400 products on sale for the football mad fan.

Note: the stadium store is closed on Sundays and on the afternoon before a game. On the day of matches, the shop opens 90 minutes before kick-off and for up to 1 hour after the full time whistle.

As the 20,000 capacity stadium first opened way back in 1931 without the commercial awareness of today’s modern stadia, you may be unsurprised to know that there isn’t an official tour available of Auguste Bonal.

Check back if there are further renovations or if Les Lionceaux ever relocate homes.

How to buy Sochaux Tickets

Tickets to see Sochaux-Montbéliard in action can be either be purchased online or in person at Planet FCSM within the normal opening hours listed above.

Ticket for the Stade Bonal follow the following pricing scheme based on whereabouts you are sat (Populaires – Présidentielles)  and what the category of the match is (Normal – Platinum):

Note: Discounts of anywhere between 30-50% are available for young people under the age of 16, students, and disabled. For further information and queries please send an email to [email protected]

How to get to Stade Auguste Bonal

Where is Stade Auguste Bonal?

Driving to Bonal is straightforward enough with the city wrapped up in numerous highspeed roads. The A36 motorway serves travellers from both the North and South, and once you are on this road all you have to do is take either the “Sochaux” or “Montbéliard” exit and then follow signs for the centre ville. You will easily spot the stadium next to the impressively large Peugeot factory.

Basel-Mulhouse Euroairport (offering convenient low-cost flights to many European destinations) is accessible by car in 50 minutes, while Zürich airport and Strasbourg airport are a mere 2 hours away.
As of now the Euroairport is not served by rail (in project though), but you may catch a shuttle bus to Saint-Louis or Basel from where you can take connecting trains (fast or slow depending on your budget and time constraints) to Montbéliard station or Belfort-Montbéliard TGV station. Note that connections between the trains are not optimized and that you’ll need an average of 2 hours to do that.

The closest hotels to the Stade Bonal are either Kyriad Montbeliard Sochaux or Sarl Alierre Hotel Kyriad both of which are cheap and less than 2 minutes walk from the ground. If you wish to stay in the small city centre of Montbeliard then try the Hotel de la Balance, which certainly won’t break the bank, or if you want something in Sochaux try the run of the mill Campanile.

Who plays at Stade Auguste Bonal?

What is the capacity of Stade Auguste Bonal?

As of 2023 Stade Auguste Bonal has an official seating capacity of 20,025 for Football matches.

When was Stade Auguste Bonal opened?

What is the postcode for Stade Auguste Bonal?

The postcode for Stade Auguste Bonal is 25200.

Covid Restrictions may be in place when you visit Stade Auguste Bonal in 2023. Please visit the official website of Sochaux for full information on changes due to the Coronavirus.