Stadium Municipal de Toulouse is the seventh biggest stadium in France and unsurprisingly is home to Toulouse FC in addition to France’s national rugby union team as well as the smaller national league competitions such as the Top 14 and Heineken cup.

The Municipal stadium of Toulouse was constructed in 1937 at the order of Étienne Billières, then Mayor of the city just in time for the 1938 World Cup, where it hosted two matches between Cuba and Romania in the very first round if the tournament (3-3 AET and 2-1). Many fans believed the design mimicked Wembley Stadum in England, and thus it was commonly referred to Little Wembley by fans in France.

After the war following the rise in popularity of Football across France, the stadium was partially redeveloped and it was to be only work completed at the Municipal for the next 50 years until the 1998 FIFA World Cup which increased the capacity to 36,500 and added mod-cons such as electronic billboards and giant television screens.

Nominated as host stadiums as part of the World Cup bid in the early 90s, Stadium de Toulouse received significant financial investment and it underwent large scale renovation in order to bring it up to the standard required to host International Football. Visually this was probably the most notable facelift in recent years.

The Stadium hosted four group matches and perhaps most notably a round of 16 between Holland and Yugolsavia with the Netherlands triumphing 2-1 sending them through to the quarter finals.

With France successfully winning the bid to Host Euro 2016, Stadium Municipal de Toulouse will once again receive a major redevelopment, at what is certainly an exciting time for the club with the capacity set to increase by 5,000 seats.

Below is a seating plan of Toulouse's Stade Municipal de Toulouse: 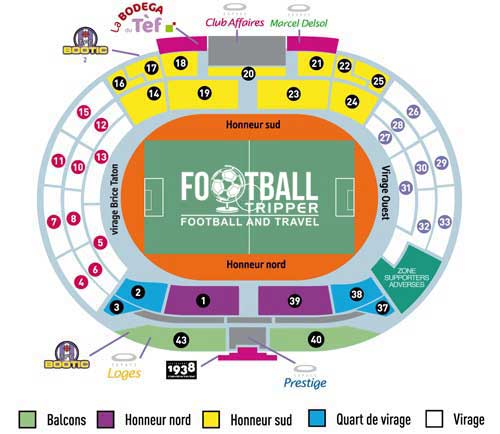 Away fans who make the trip to Toulouse are housed within the Virage Ouest within an area known as “Zone Supporters Adverses” which sounds pretty damn cool.

It is located towards the northern stand known as Honneur Nord, and is identifiable by the steel cage which is used to separate the visiting supporters from away fans.

Within the little island the Municipal Stadium is located on there really aren’t many suitable options, unless you are happy to just eat the standard range of food options inside the concourse.

To get a slightly higher quality dinner you will need to walk 5 minutes East to Avenue de l’U.R.S.S which has numerous options ranging from Sushi Kan to Curry House and Moe’s Burger to Redstar Pizza.

FC Toulouse operate a single club shop at the Municipal Stadium in addition to their own official online boutique.

As a Municipal Stadium which first opened in 1937 by the local Government unsurprisingly it lacks the commercial bells and whistles of modern day stadia. As a result, there isn’t a tour currently available of Toulouse’s stadium.

How to buy Toulouse Tickets

Tickets to see Toulouse (TFC) play at home can either be purchased online, via phone +33 (0) 892 70 4000 or in person at any number of places around the city including the official club store, and Ticketnet/Francebillet ticket outlets.

Whilst it can be convenient to book your tickets in advance, you can risk it and try to buy tickets on the day of the match, with ticket windows known as “guichets” open from around 2 hours before the game kicks off.

Ticket prices for TFC are very reasonable with the cheapest seat in the stadium coming in at €12.00 for a seat behind the goal, and up to €39.00 for something within the main grand stand. Prices changing depending on the profile of the opposition.

How to get to Stade Municipal de Toulouse

Where is Stade Municipal de Toulouse?

Stade de Toulouse holds the unique distinction of being located on an Island in the River Garonne, approximately 3.00 km away from  is located on Capitole de Toulouse which is the heart of the city.

As a fairly large city, Toulouse is encircled by a ring road comprised of the A620 and E72 which means different areas of the city are highly accessible no matter  what your starting point may be.

It doesn’t appear as if there are any official car parks available to the general public on matchdays, however you can always check out the Ile D’empalot on Parkopedia for the cheapest parking options.

The main railway station of Toulouse is located slightly north of the administrative centre making it around 5.00 km from the Stadium.

The high-speed rail line makes the Southern French city well connected with the rest of the country with four major transport links to Bordeaux, Paris, Bayonne and Saint-Agne Auch.

To get to Toulouse’s ground on matchdays you can catch a free shuttle service which departs from Esquirol Metro station and drops you off at the two closest stops: St Michel and Empalot metro station.

Both on the yellow line, the metro journey will leave you with no more than a 15 minute walk to the football.

Toulouse-Blagnac Airport is approximately 7km Northwest of the city and connects the Midi-Pyrénées region with a number of far flung international destinations.

Once you have landed and retrieved your luggage, you can travel into the city centre either via Airport Shuttle Bus service (Tisséo), by taxi or by rental car.

Eventually the city hope to connect the airport to the area with a dedicated Tram Line but for now construction has yet to be complete.

Within the immediate vicinity of The Municipal Stadium, there aren’t any accommodation options with your closest choice probably being Le Per Toulouse Hotel.

Around the Centre Ville there are numerous options, so much so that whatever I suggest is probably useless.  Go and do your own research :)

What is the capacity of Stade Municipal de Toulouse?

As of 2023 Stade Municipal de Toulouse has an official seating capacity of 35,472 for Football matches.

What is the postcode for Stade Municipal de Toulouse?

The postcode for Stade Municipal de Toulouse is 31028.

Covid Restrictions may be in place when you visit Stade Municipal de Toulouse in 2023. Please visit the official website of Toulouse for full information on changes due to the Coronavirus.