Stade René Gaillard is the home stadium of Chamois Niortais F.C who currently ply their trade in the second tier of French football after finishing runners up in the Championnat National in he 2012-2013 season. First opened in August 1974, the ground has a capacity of 10,898.

The stadium, then known as Stade de la Venise Verte was inaugurated on 3rd August 1974, however it was later renamed in honour of René Gaillard who served as the mayor of Niort between 1971 and 1985 when he died. Previously Chamois Niort played at Stade de Geneve which first opened in 1925 but it was slowly becoming dissipated, and in need of replacement.

Municipally owned, Stade René Gaillard is multi-purpose by design and features an athletics track around the perimeter of the pitch. Perhaps to the detriment of the match day experience for football fans, the stadium continues to be used equally for athletics competitions, and has hosted several competitions including the 2007 “Elite” National Tournament and the 2010 Youth Championships.

To date the record attendance was set during the 1987/1988 season – Chamois Niortais F.C’s only one spent in Ligue 1, the top division of French Football. 16,715 fans saw the match against Olympique de Marseille on 24th October 1987. This is in contrast to the >5,000 or so gates the club receive on average per season.

The most recent renovation work at Stade René Gaillard was completed in June 2014 at the end of the football season. The pitch was relaid with a more durable blend of grass, a new drainage system was installed and the automatic sprinkler system was relocated.

As for the future of René Gaillard there has been suggestion since at least 2004 that Chamois Niortais could relocate to a purpose built stadium. Enlisting the services of Chilean architect Borja Huidobro to design a ground with an initial 12,000 capacity, the total cost was expected to be €25 million euros. As there have no updates regarding this project since its safe to say that it has all but been abandoned.

Below is a seating plan of Niort's Stade René Gaillard: 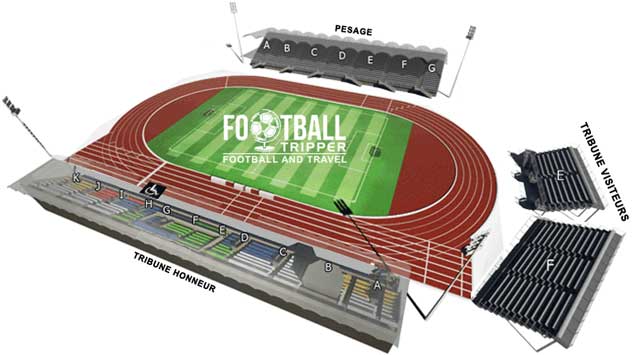 How to get to Stade René Gaillard

Where is Stade René Gaillard?

Who plays at Stade René Gaillard?

What is the capacity of Stade René Gaillard?

As of 2023 Stade René Gaillard has an official seating capacity of 16,715 for Football matches.

When was Stade René Gaillard opened?

Covid Restrictions may be in place when you visit Stade René Gaillard in 2023. Please visit the official website of Niort for full information on changes due to the Coronavirus.