Stade Océane or Grand Stade du Havre is a football stadium located in the North-Western city of Havre located in the region of Upper Normandy. Built in 2012, at an approximate cost of €101m, the 25,178 capacity stadium so popular there are reports that a similar stadium is now being built in Israel.

Costing an estimated €101m euros, Stade Océane replaced Le Havre’s former stadium, Stade Jules Deschaseaux, which first opened in 1932. Famous for hosting a match between Czechoslovakia and Netherlands at the 1938 World Cup, the stadium was beginning to show its age and with a capacity of 16,400 was a world way from its prime.

Designed by SCAU and KSS who lent a hand to Estádio Cidade de Coimbra, the facelift of Stamford Bridge and the conversion of the London Olympic Stadium’s for West Ham, Stade Océane is a truly unique stadium. Built over a two year period with a capacity of 25,178, the stadium is the largest in the Normandy region and is located inland overlooking the English Channel.

The exterior is made up of a series of blue polymer shells which are reinforced with synthetic fibres. Reflecting the stadium’s name and the deep blue aura of the ocean, the intensity of the design is amplified at night when the lights are turned.

Stade Océane first opened on 12th July 2012 with an inaugural match between Le Havre AC and Lille OSC who had also just moved into a new stadium – Stade Pierre-Mauroy. The original opponents chosen were Glasgow Rangers, however they had to pull out due to their perilous financial position.

Envisioned as a multi-purpose arena, Grand Stade du Havre hosted Didier Deschamps first match as the manager of France against Uruguay on 15th August 2012. That Summer it was also chosen as a last minute back up for the European Challenge Cup Rugby tournament, and since opening it has hosted numerous concerts from some of the biggest artists in the world.

Below is a seating plan of Le Havre's Stade Océane: 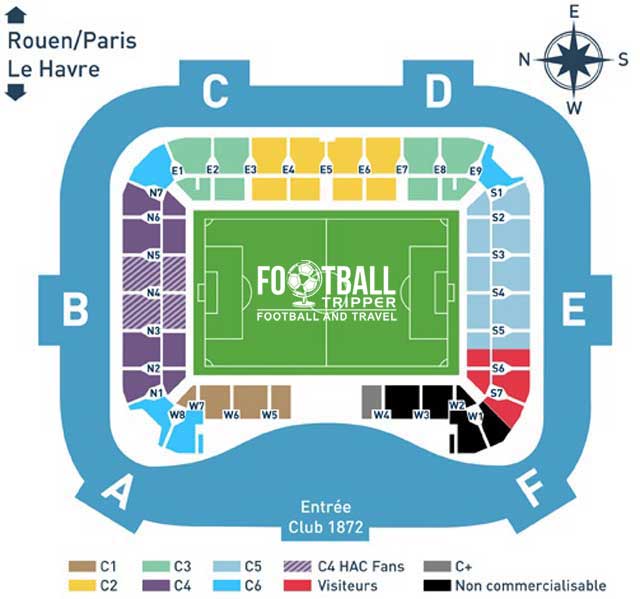 How to get to Stade Océane

Where is Stade Océane?

Who plays at Stade Océane?

What is the capacity of Stade Océane?

As of 2023 Stade Océane has an official seating capacity of 25,178 for Football matches.

When was Stade Océane opened?

Covid Restrictions may be in place when you visit Stade Océane in 2023. Please visit the official website of Le Havre for full information on changes due to the Coronavirus.