Stade Michel d’Ornano is a multi-purpose sports venue located in the north-western commune of Caen within Lower Normandy. Built in 1993 to replace the outdated Stade de Venoix, the 21,500 capacity ground is primarily used for the home matches of local football team Stade Malherbe Caen.

Stade Michel d’Ornano first opened in the June 1993 in time for the start of the oncoming football season in August. Replacing their former home of Stade de Venoix which first opened in 1925 and by now was coming to the end of its shelf-life, the new stadium essentially doubled the old ground’s 11,500 capacity.

Construction began in March 1991 and took just over 27 months in total to complete with some stands built with terrace places. Proving unpopular for one reason or another they were removed a year later in 1994, and replaced with seating in line with other stadiums across continental Europe, excluding Germany of course.

SM Caen’s ground is named after Michel d’Ornano who was a popular French politician from the local area. Holding numerous cabinet positions between 1974 and 1981, he initially made his reputation in serving as president of the local council for the Basse-Normandie region were Caen are based. He sadly died in 1991 before the stadium was completed.

Although not used to host matches of the 1998 Fifa World Cup, The England National Team used Stade Michel d’Ornano as one of their training bases, and they even played a friendly match against home side Stade Malherbe Caen in preparation. Although not quite Wembley, in typical English fashion, the team managed to under-perform with a narrow 1 nil victory.

The record attendance to date was set in 2004 when 20,972 supporters crammed into the stadium to see Caen take on Olympique de Marseille. Although theoretically it’s possible that this could be beaten, the fact that it hasn’t been bettered in the last 10 years perhaps suggests that it never will – save for a very special occasion.

Below is a seating plan of Caen's Stade Michel d’Ornano: 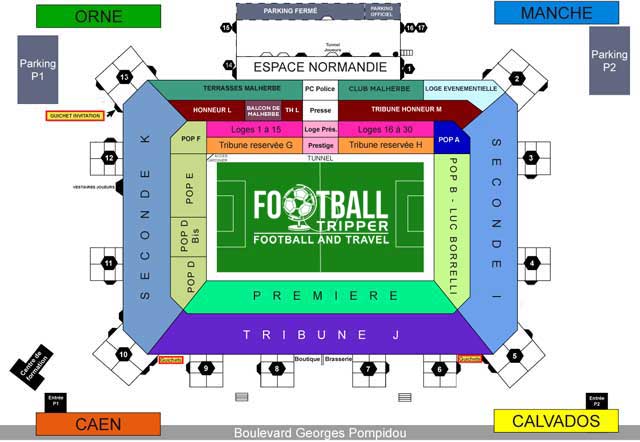 By default away fans are housed within the lower tier of the south-east corner, essentially within the southern-goal end.

As you would expect from a relatively new stadium, views from the visitors zone and other parts of the ground are decent with the cantilevered roof designed ensuring that there are no restricted views.

The map below reveals the location of four of the most football friendly pubs in Caen.

Although they are all located within the city centre, they’re not too far away from the stadium that you couldn’t feasible make the journey by foot.

There aren’t too many fast-food joints immediately around the environs of Stade Michel d’Ornano which means you can either grab something such as a McDonalds within the city centre or wait until you get to the ground where the usual matchday options await.

SM Caen operate a single club store at their stadium in addition to an official online boutique. It is located within the back of the eastern stand on 23 Boulevard Georges Pompidou, and is usually pretty busy just before kick-off.

It doesn’t look as if either SM Caen or the local council currently offers fans the chance to undertake a tour of the facilities at Michel d’Ornano. If the club ever decide to change their stance on this we’ll be sure to update this section.

How to buy Caen Tickets

Tickets to see SM Caen in action at Stade Michel d’Ornano can be purchased online from the official website, at the ticket office at the stadium in the days leading up to the match and from various points throughout the city such as Bank Caen Calvados.


Note: The above prices are based on matches against Olympique Lyon, and may well be cheaper for smaller clubs.

How to get to Stade Michel d’Ornano

Where is Stade Michel d’Ornano?

Stade Michel d’Ornano is located just over 2.8 km from Caen city centre with the resulting journey by foot likely to take the average person no more 45 minutes.

There are two official car-parks located within the north-west and north-west areas adjacent to the stadium, in addition to various on-street parking which surrounds the local streets.

The city is served by a single railway station, Gare de Caen, which is located approximately 4.5 km east of Stade Michel D’Ornano.

The closest airport is Caen-Carpiquet and it is located just 6.00 km west of the Caen. It is the largest airport in the Lower-Normandy area relative to the number of passengers it serves.

There are a number of hotels located five minutes south of the ground on Rue Caponiere which is a major road into the city.The centre of Caen does of course have much more varied options including the Hotel Ibis Budget, Hotel France and a Best Western.

Who plays at Stade Michel d’Ornano?

What is the capacity of Stade Michel d’Ornano?

As of 2023 Stade Michel d’Ornano has an official seating capacity of 21,500 for Football matches.

When was Stade Michel d’Ornano opened?

What is the postcode for Stade Michel d’Ornano?

The postcode for Stade Michel d’Ornano is 14064.

Covid Restrictions may be in place when you visit Stade Michel d’Ornano in 2023. Please visit the official website of Caen for full information on changes due to the Coronavirus.