Stade de Gerland also known as Municipal de Gerland in the industrial city of Lyon, is the home stadium of historically successful French side Olympique Lyonnais. For those wanting to visit the stadium, you better be quick as Lyon are planning to move to a new 58,000 capacity stadium in 2014.

The Stade de Gerland is a multi-purpose sports stadium and main sports arena of the city of Lyon which is located in the East-Central Rhône-Alpes region. Built within the 7th arrondissement district of Gerland, the stadium is the fifth largest stadium in France, fourth in Ligue 1 and has been registered as a Historic Monument on the 4th October 1967. Something which has been both a blessing and a curse for Olympique Lyonnais.

Since construction began at the turn of the 20th century and the project was completed in 1926, the stadium has undergone several configurations other the years in parallel with France hosting major sporting events such as the Euro 1984 and the World Cup in 1998. The running track was removed in the 1980s with the conversion to all-seating occuring a decade afterwards.

As a multifunctional Sports Stadium, Gerland has twice hosted the Rugby World Cup, once in 1972 and more recently in 2007 where the city hosted three pool matches between Australia v Japan, Argentina v Georgia and New Zealand V Portugal. Local rugby side Lyon OU currently play their matches at Stade Georges Lyvet in Villeurbanne but can use Gerland.

As for the future of Stade de Gerland, in 2007 Jean-Michel Aulas, President of Olympique Lyonnais launched an ambitious new project known as OL Land which would be a new 60,000 plus capacity stadium within a fully commercial complex located towards the east of the City.

The Stadium which is set to be completed in 2015 in time for Euro 2016 and  will be known as Stade des Lumières (The Stadium of Light) or Grand Stade de Lyon.

Below is a seating plan of Lyon's Stade de Gerland: 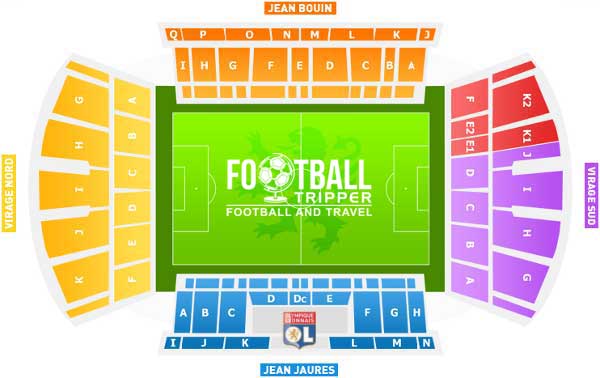 Away fans are housed within the Virage Sud which is the southernmost goal-end. Shared with some sections of the home supporters, the visiting supporters by default occupy the eastern section towards Jean Bouin as identified by the red section (K1, K2, E1, E2 and F) on the above seating plan.

Views from this part of the ground are decent with Stade de Gerland having the advantage of being an older stadium comprised of four distinct stands. This means there’s no proper corner seating which usually has worse views.

Although the city has a slight reputation as being rather industrial in nature, the city of Lyon is the second most visited in France, attracting over 6 million tourists a year and has a strong reputation for fine dining with some dubbing it “World Capital of Gastronomy”.

Naturally it also has quite few pubs and cafes, with the below map outlining some of the more football friendly ones.

Moving back to Stade de Gerland and Football, you won’t find as many fancy options around the stadium with McDonald’s and Subway being two examples of fast food joints on hand.

Still, with the aforementioned section in mind, you’ll probably want to grab a snack before getting something more fancy later on in the evening.

In addition to Lyon’s Online store the club runs two stores throughout the city with the most popular one located at the stadium itself.

As Stade de Gerland dates back to the start of the 20th century it should come as no surprise that the stadium lacks the requisite commercial facilities to offer guided stadium tours.

The best bet would be to simply take a match in and get there as early as possible to appreciate the facilities.

How to buy Lyon Tickets

Tickets to see Olympique Lyonnais play football can be purchased online, from OL stores or at the dedicated ticket offices at stadium itself. You can also acquire tickets from resellers such as France Billet and Digitick located throughout the city.

Price wise, Lyon is one of the more affordable teams to watch in France with the cheapest tickets coming in at €10.00 for a seat high up behind the goal, and around €50.00 for something relatively central within the main grandstand.  Ticket prices will of course vary depending on who the opposition is.

How to get to Stade de Gerland

Where is Stade de Gerland?

Stade Gerland is conveniently placed near to two motorways (A450 and A7) which makes driving to it on matchdays pretty easy.

Some fans note that the best way to approach it from outside the city is from the southern ring road (Périphérique Sur) followed by exit 16 signposted as Gerland.

The main railway station of Lyon is arguably Gare de Lyon-Perrache even though there are 6 stations in total as it is the most centrally located, is the oldest and serves the most passengers.

Frances high-speed rail service TGV operates numerous routes throughout the country meaning Lyon is very well connected and accessible no matter where you are in Europe.

From Perrache train station you can catch tram 1 or 2 to metro stop Jean Macé and then transfer to Metro Line B from there which is connected to Stade de Gerland with a dedicated stop of the same name.

If your starting point isn’t the train station then you can easily locate and walk to your nearest Metro station on the blue line (B) with all stations located on the eastern bank of the river.

Lyon is served by Saint-Exupéry International Airport which is regarded as the second largest airport in Nice-Côte d’Azur province and is approximately 25 km east of the city. There is a smaller Lyon-Bron airport but this is reserved for private and business aviation only.

Upon landing a taxi to the city centre will likely cost you €40.00 – €50.00 with the new Rhônexpress tramline which connects Lyon and the airport a more affordable option. More affordable still is the bus shuttle service which will take longer but is undoubtedly cheaper.

As the stadium is situated next to Parc de Gerland and Port De Lyon Edouard Herriot there isn’t accommodation options immediately within the vicinity of the ground but there are a few options as you begin to travel North.

Firstly, and probably closest are the Hotel Ibis Budget and “Normal” hotels which give you two easy options to consider, with Hotel Du Simplin and Best Western Hotel Charlemagne being two choices nearer the train station.