Bootham Crescent is the home ground of current League Two side, York City F.C. First opened back in 1932, the stadium located in the Clifton suburb of York, North Yorkshire, has a current capacity of 7,872. Although primarily used for football matches, occasionally it has hosted musical concerts, firework displays and even American football matches.

Bootham Crescent has been the home ground of York City FC since 1932 when it was decided that Fulfordgate stadium had inadequate infrastructure and matchday facilities which was causing attendances to decline. Members of the club voted 115 to 37 to move to the plot of land where York Cricket Club was located and on the 31st August 1932 the ground held its first Third Division North match after the construction of the Main and Popular Stands.

The record attendance at Bootham Crescent was recorded in January 1935 when 13,612 fans saw York take on Derby County in a third round FA Cup match with the visiting team coming away with a narrow 1 nil victory.

Used as an air raid shelter for the local Shipton Street School during the Second World War, numerous improvements occurred at Bootham Crescent in the second half of the 20th century after the North Yorkshire based club purchased the lease to the ground outright in 1948.

Major renovations occurred following the publication of the Taylor Report in the 1990s, including the conversion of the Main Stand from terracing to seating, and the installation of more powerful floodlights.

York City have always tried to ensure that faculties are up to date and, whilst fans were naturally disappointed in 2004 when plans to move to the new Huntingdon Stadium fell through, Bootham Crescent remains a much loved British stadium.

Below is a seating plan of York City's Bootham Crescent: 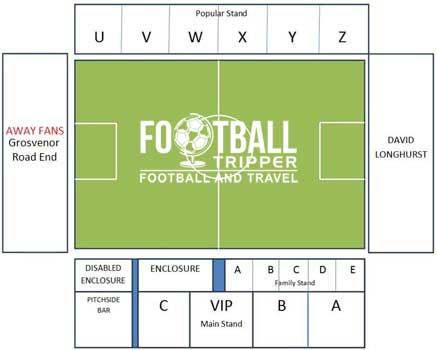 Away fans visiting Bootham Crescent are housed within The Grosvenor Road Terrace and can enter the stand by entering through turnstiles 14 to 23 on Grosvenor Road.  Predominantly uncovered terracing, the southern stand can accommodate approximately 1,400 spectators with a small allocation of 332 covered seats also available for away fans located in Section U of the “Popular Stand”.


Tickets are usually purchased in advance from the visiting team’s ticket office although as if often the case for lower league matches, some tickets may be for sale on the turnstile. .

Once you have entered the turnstile and climbed the top of the stairs you will have the chance to buy a programme if you haven’t done so already. The concourse contains a food kiosk which sells the expected selection of your standard footballing food and drink.

At the stadium there is The Pitchside Bar which welcomes both home and away supporters both before and after the match. Naturally busy on matchdays, the bar serves a range of locally sourced ales amongst your standard drinks, with sky sports news typically on loop.

Within the center of the city there are numerous bars to choose from, but for fans coming in on the train, Burton Stone Inn is usually the most popular choice to drink at. Situated on Clifton road, it is a decent half-way point between Bootham Crescent and the train station.

Towards the north-west of the stadium on Burton Stone lane there are a few choices such as Clifton Fish & Chips, Miss Brown’s Bakery and a Sainsbury’s Supermarket.

The Minstermen operate a club shop at Community Stadium in addition to their own official online site, The City Club Shop.

To find out more information and to confirm opening times you can send a message to [email protected] or try phoning the store on 01904 559503.

It doesn’t appear as if York City FC currently offer fans the chance to undertake a stadium tour of Bootham Crescent. If this changes, we’ll be sure to update this section.

How to buy York City Tickets

Tickets to see the Minstermen can be purchased via the usual channels including telephone (01904 624447 ext. 1), email ([email protected]) and in person at the stadium ticket-office (9.30 am – 5.00 pm). There are currently no online sales of  York City tickets !

Please note that some tickets for the York Pullman Main Stand Section B and the family stand can only be purchased in advanced from the ticket office before the day of the game. Sections A and C for this stand are on the contrary not available via pre-sale according to the website.

How to get to Bootham Crescent

Where is Bootham Crescent?

Bootham Crescent stadium is located in the suburb of Clifton which is approximately 0.8 miles north east of York city centre.

Bootham Crescent Stadium’s address for satnav is as follows:

Car parking within the immediate vicinity of Bootham Crescent is limited and as a result the club have come to an agreement with York Hospital for the use of some of their excess parking spaces.

For just £2.50 you can park at in areas A-Z between 1.00 – 6.00 pm at the hospital providing you download and print out this car parking voucher , along with the parking ticket the machine gives you in the car park.

Once you’ve displayed both the voucher and your ticket, the walk is less than 10 minutes to the ground. Head westwards across the train tracks on bridge lane until you cross onto Grosvenor Road. The stadium will appear on your right-hand side a few hundred metres later.

The main railway station, York Station, is situated in the city centre which is approximately 1 mile from the ground which equates to around a 20 minute walk. Below are some basic walking directions from the train station:

There are a clutch of affordable hotels located between Grosvenor Road and the A19 Clifton Road including the popular The Grange and The Churchill.