Pride Park Stadium, currently known as the iPro Stadium for sponsorship reasons is a purpose built football stadium located in a business park within the outskirts of the city of Derby.

Pride Park was officially opened on 18th July 1997 by The Queen in a ceremony which attracted 30,000 spectators, however it wasn’t until two weeks later on the 4th August that the inaugural football match was played.

Aiming to kick-start a new pre-season tradition which would see the club invite European teams to Pride Park, the club played Italian side Sampdoria who spoiled the party with a narrow 1 nil win courtesy of a goal by future Fiorentina manager, Vincenzo Montella.

Previously The Rams had played their football at The Baseball Ground, but since the publication of the Taylor Report after Hillsborough, the 1895 built ground was no longer adequate.

Attracting a record crowd of 41,826 for a game against Tottenham in 1969, by the time the ground was converted to all-seating in its final season, the capacity was just under 17,500. This failed to match the ambition of Derby, and a new stadium was immediately sought.

In addition to fears that terracing could lead to crushing, there had also been grave concerns for the old stadium ever since the Bradford City stadium fire in 1985. Like Valley Parade, The Baseball stadium was mostly comprised of wood, although this is somewhat of a gross simplification of the causes of the fire.

After identifying a plot of land on the up and coming Pride Park retail park, the club announced the proposed move on 21st February 1996 just before kick-off against Luton Town.

Estimated to cost £16 million, the stadium was set to have a capacity of 35,000 and was designed by The Miller Partnership who were responsible for the look of Middlesbrough’s Riverside Stadium.

Although there are some similarities in the designs such as the use of a large, asymmetrical stand which was connected to a horseshoe-shaped bowl, Derby made over 30 unique changes to the concept in order to give the ground an identity of its own.

When it came to naming the new football stadium, Derby’s Management originally flirted with the idea of calling it The New Baseball Ground, however it was eventually decided that it should be called Pride Park Stadium.

Named after the retail and business park in which it resides, Derby’s ground is currently known as the iPro Stadium for reasons of sponsorship after the global sports drinks company signed a £7 million sponsorship deal starting on the 7th December 2013.

Below is a seating plan of Derby County's Pride Park Stadium: 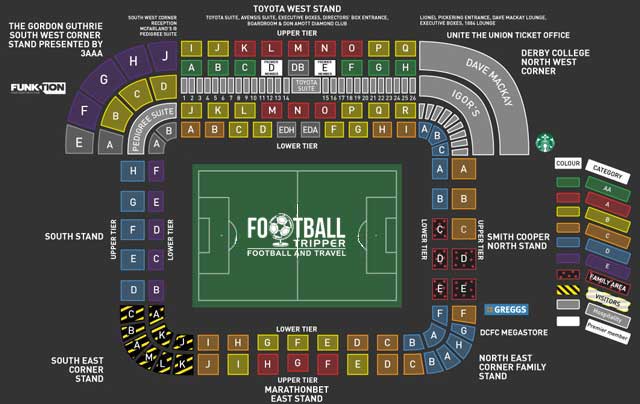 The iPro stadium is comprised of the following four sections: North, East, South and The Toyota Main Stand (West).

Whilst fairly typical for clubs with enclosed stadiums to do these days, unless the adjacent goal-end regularly sells out, it perhaps would make more sense to make away fans more centrally located, however it is often justified by the idea that it results in the visitors making less noise.

As a ground which was built in the late 1990s everything is relatively modern, meaning that the facilities at the iPro easily satisfy the expectations of today’s day football supporter.

This includes things ranging from the simplicity of an unrestricted view to more understated features like a wide concourse with efficient kiosk operations.

Fairly close to the train station, and with a wealth of pre and post-match dining options, Pride Park has emerged as a popular day out for football fans, and certainly is a “White Riot” to attend.

If you’re seeking more traditional boozers then you should first consider catching the train into Derby as within 10 minutes walking distance there are a number of boozers.

Two of the more popular ones are The Brunswick Inn which is a “historic Victorian local with cask ales” and The Alexandra Hotel which bills itself as a “real ale pub”. To reach these turn right upon exiting the station up the Railway Terrace towards the River Derwent.

For those driving your best bet is pulling up at one of the many restaurants around the retail park and using the bar inside.

The Harvester has always been a popular choice for away fans, although management does sometimes refuse to admit fans if behaviour is deemed too unruly to other customers.

Derby County’s Megastore is located in the north-east corner of Pride Park stadium and is open to the general public 7 days a week although expect the store to be open for more hours leading up to late kick-offs and for a short period after the game.

Usual the opening times are as follows:

If you’re not visiting the stadium for a while, forget to purchase something on your last visit or simply want to check out the range of wares then you can always check out the official online megastore: https://www.dcfcmegastore.co.uk/

Derby offer Fans of the Rams the chance to undertake a 60 minute tour of the iPro Stadium taking in the hallowed halls of the ground and usual restricted access areas such as the Directors’ Box, Players’ Tunnel, pitchside and the home dressing room.

Prices start at just £8 for adults, £6 for Seniors and £5 for juniors although they must be accompanied by an adult.

Season ticket holders receive a small discount on their ticket and you can book our your place on the tour by phoning 0871 472 1884 and selecting option 0 to speak with reception.

To view the latest tour schedules and availability check out this page from the website.

How to buy Derby County Tickets

Derby operate an innovative demand based pricing model for home matches within the League where ticket prices increase and decrease based on levels of demand.

Whilst the cheapest price will never fall below the average price per game season ticket holders pay, it can result in a cheaper day out if you’re flexible with where you sit within the iPro.

As a result it’s hard to list exact figures for the current season but looking at the site adult ticket prices seem to start from anywhere between £10-£22.50.

You can obtain tickets via the usual channels such as via phone (0871 472 1884 option 1), in person at the Untie The Union Ticket Office at the ground and most popularly via the online ticket office.

How to get to Pride Park Stadium

Where is Pride Park Stadium?

The iPro Stadium is located approximately 1.5 miles south-east from Derby city centre within the confines of the Pride Park Business Park, which the stadium shares its official non-sponsorship name with.

Derby County’s ground is conveniently located just off the A52 on Brian Clough Way which is less than 10 minutes from Junction 25 of the M1 stretch of motorway.

At the stadium there is to quote Derby County FC “Ample matchday parking” with numerous car parks available to both sets of visiting supporters.

Discounts are available for people who car share and want to park in the South and DW Sports Car parks although we can’t currently tell you the prices.

The iPro stadium is located exactly 0.9 miles from Derby Railway Station, with the resulting walk taking the average fan no more than 20 minutes.

Derby Station is served by direct rail services to over 14 destinations across the UK including London St Pancras, Birmingham, Manchester and Leeds.

Located on a business and retail park there are a few well placed accommodation options such as The Premier Inn east of the stadium just off of Brian Clough Way, The Holiday Inn Express on Pride Parkway and the Best Western Stuart hotel next to Derby railway station.

Who plays at Pride Park Stadium?

What is the capacity of Pride Park Stadium?

As of 2023 Pride Park Stadium has an official seating capacity of 33,597 for Football matches.

When was Pride Park Stadium opened?

What is the postcode for Pride Park Stadium?

The postcode for Pride Park Stadium is DE24 8XL.

Covid Restrictions may be in place when you visit Pride Park Stadium in 2023. Please visit the official website of Derby County for full information on changes due to the Coronavirus.