The Den, sometimes referred to as The New Den, is the 20,146 capacity home ground of the infamous Millwall Football Club.

Located in the South Bermondsey area of South-East London, the stadium opened back in 1993 at an estimated cost of £16 million.

The Den was the first stadium to be built in the aftermath of the Hillsborough Disaster and subsequent publication of the Taylor Report in 1990. The previous stadium, known as The Old Den had  previously been home to the club for over 83 years, however the costs of redevelopment weren’t deemed to be unfeasible by Chairman Reg Burr.

Originally the club announced plans to construct a new 25,000-30,000 capacity stadium within the Senegal Fields area, however the club couldn’t acquire the requisite funding, and had to scale down their new plans slightly.

Identifying a patch of land less than a quarter of a mile away from the original ground within South Bermondsey, the club quickly gained planing permission and construction began shortly after in 1991.

Costing an estimated £16 million upon opening, the inaugural fixture was held on 4th August 1993 against Portuguese giants Sporting Lisbon with the opening ceremony conducted by MP John Smith, who at the time was the leader of the Labour Party.

As the first new football ground to be built in London since 1937, and an example of urban generation, the leader of the opposition didn’t of course miss the opportunity to score a few points with the public.

Millwall’s new stadium was initially known as The New Den, to distinguish it from The Old Den however having been opened now for nearly 25 years now, fans usually just refer to it as The Den.

Whilst the new stadium has failed to propel Millwall to the heights of Premier League, the club did make an appearance at the Millennium Stadium for the 2004 FA Cup Final, although The Lions were predictably outclassed by Manchester United.

With the average attendance generally around 50% of the ground’s capacity there are currently no plans to expand the stadium, although if the club should ever wish to do so then the corners could easily be filled in.

Below is a seating plan of Millwall's The Den: 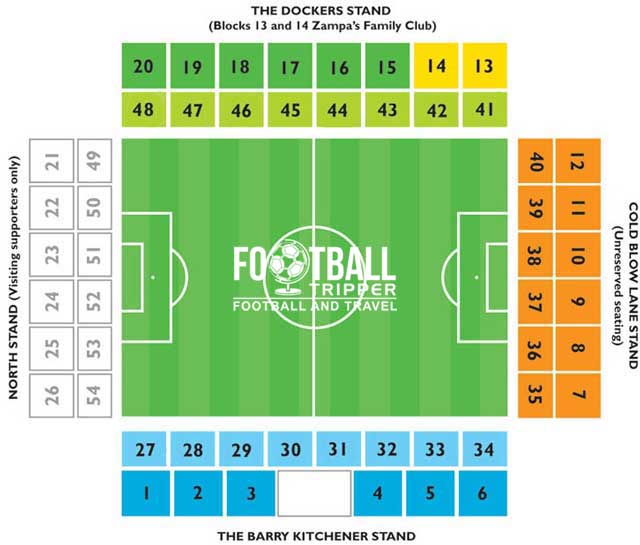 The Den Away End

“Millwall Away”. The two words which used to strike fear into the heart of every football fan in England.

Thankfully a lot has changed since the 1980s and football fans can now safely attend a match at The Den without getting their head caved in with a brick. The legacy of Millwall and its “naughty” supporters lives on however with the Metropolitan Police still opting to dispatch large amounts of “old bill” to the ground.

This however works out well and ensures that The Den is almost as hospitable to visiting fans as every other away ground in England.

Away fans usually have the 4,000 or so capacity North Stand to themselves, however the typical allocation of tickets restricts the visiting supporters to the second-tier which arguably results in better views of the action.

Like the area of the ground itself, the concourse is pretty much a no-thrills affair with unadulterated concrete the backdrop of choice for everything ranging from the kiosks to the toilets.

There really aren’t any pubs around Millwall’s Den according to local listings, and any which are, are unlikely to be suitable for visiting supporters.

This means that traveling supporters have the option of either drinking exclusively inside the stadium or going for a few beverages at London Bridge Station which is where the connecting train is for most fans.

One of the more popular options for those seeking a pub with a bit of character is The Shiprights Arms on Tooley Street which boasts of having an “original shipwrights mural”, with the 17th century George Inn another candidate, as is The Slug and Lettuce chain pub both of which are on Borough High street.

Again, pretty much the same as above applies to the food section. Built up in an area which is far from commercialised, there aren’t a ton of option with Greggs and Reema Fish & Chips the best bet outside South Bermondsey Station.

London Bridge on other hand pretty much has a lot more choice, with a slight bias towards sit-down restaurants rather than fast food joints.

The club store at the Den is known as the Lions Store and was recently refurbished at the beginning of the 2012/2013 season to give it a more contemporary feel. The new store stocks an excellent range of Millwall Merchandise, and is second only to the club’s official online store.

The opening times are as follows:

Millwall FC have been running tours of The Den since September 2014 with tickets costing £12.00 for adults, and £6.00 for everybody else. To book your place on the tour and to find out available dates please visit this page on the website.

How to buy Millwall Tickets

Tickets to see Millwall play at home are usually priced using a two tiered category system with Category A representing the higher profile and in demand matches, compared to the cheaper Category B.

The easiest way to purchase tickets is online via the official e-ticket page, although if you prefer you can still purchase them in person at the stadium or by phoning the hotline (0844 826 2004 – option 2).

Barry Kitchener Upper (A, B)

How to get to The Den

Where is The Den?

The Den is located South East of the capital adjacent to the railway line serving London Bridge, within the South Bermondsey – London Borough of Southwark.

The Den’s Stadium Address for satnav is as follows:

Located in East London, Millwall Football Club are pressed for space and as a result there are no club owned parking facilities for supporters located at The New Den.

Fans are instead recommended to travel by rail or official coach of the visiting team.

South Bermondsey railway station is located exactly half a mile from The Den which will take the average fan less than 10 minutes on foot. Exit the station on Ilderton Road turning left and following this road as it bends round until you can turn left onto Zampa Road which will take you under the tracks through the tunnel to Millwall’s Ground.

The Den isn’t really served by a tube station with Surrey Quays on the orange London Overground Line 1 mile away (20 minutes) and Bermondsey on the silver Jubilee Line 1.2 miles (25 minutes) being the two closest stops.

By all means you can travel to these stops and walk but South Bermondsey overground station is the easiest route for most.

Public Transport of The Den

Hotels Near The Den

Located in an old industrial area which is yet to under go lots of gentrification there aren’t any hotels near to The Den. Your best is to hop on the train at South Bermondsey to London Bridge.

Although expensive there is a lot choice such as Premier Inn Southwark, The Bermondsey Square Hotel and Holiday Inn Express.

Remember that you are in London and once you get the overground to London Bridge you can practically get the tube anywhere.

Who plays at The Den?

English side Millwall play their home matches at The Den.

What is the capacity of The Den?

When was The Den opened?

The Den officially opened in 1993 and is home to Millwall

What is the postcode for The Den?

The postcode for The Den is SE16 3LN.

Covid Restrictions may be in place when you visit The Den in 2023. Please visit the official website of Millwall for full information on changes due to the Coronavirus.