Millennium Stadium located in the country’s capital city of Cardiff  is the national sports stadium of Wales. Used to primarily host rugby matches, the ground also hosts the larger football matches of the national mens team.

Millennium Stadium was constructed to host the 1999 World Cup, and the Welsh Rugby Union used the tournament as a springboard to replace the ageing National Stadium which first opened in 1962. Known as Cardiff Arms Park, the old ground had a capacity of just 53,000 and it was deemed too small to host major sporting events after the publication of the Taylor Report in 1990 which saw all terrace sections converted to seating.

Designed by famous football architects Populous who had just finished Bolton’s Reebok Stadium in 1997, the ground was built with an impressive 74,500 capacity and famously featured a fully retractable roof similar to Ajax’s Amsterdam Arena. Costing a relatively modest £121 million, the stadium is owned by a subsidiary company of the Welsh Rugby Union and was partially funded by £46 million from a public initiative aimed to mark the passing of a 1000 years.

The inaugural football match to be held at the stadium was held a year after opening in March 2000 between the Welsh National Team and Finland, and in the years that Wembley Stadium was rebuilt the ground became one of the most famous in the world of football. It stepped up to host domestic cup finals, FA Community Shield and Football League Play-offs.

The F.A Cup final was held between 2001 and 2006, with Liverpool bookending the competition’s location in Wales with victories in both the first and last finals. The Reds defeated Arsenal 2-1, and then saw off West Ham in what is regarded as one of the greatest FA cup finals of all time. The match ended in a penalty shoot-out after a 3-3 draw in extra time.

In recent years it’s routine usage for football has declined somewhat due to falling football attendances in the country with the Welsh F.A preferring the smaller venues of Cardiff’s Stadium or Swansea’s Liberty. Millennium Stadium was recently used to host matches of the 2012 London Olympics, and was one of the proposed venues for Wales and Scotland’s failed bid to host Euro 2016.

Below is a seating plan of Wales's Principality Stadium: 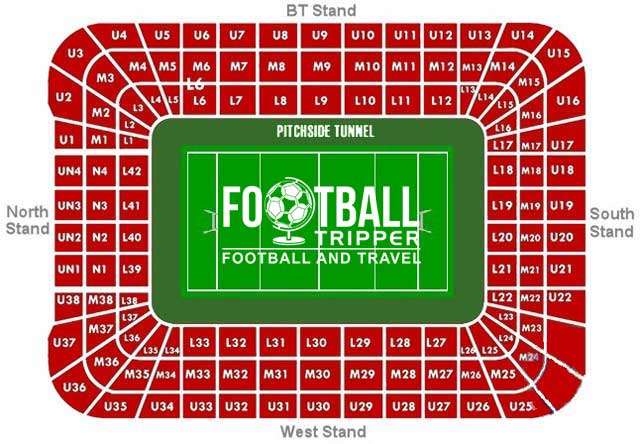 Located in a vibrant city centre there are an abundance of pubs to choose from before heading to the Millennium, with some fans choosing to stick to pubs closest to their seats to ensure a short walk into the ground.

Running almost parallel to Millennium Stadium and The River Taff is Westgate Street which is where numerous pubs are located. There is the likes of a Queens Vaults JW Bassett Pub, O’Neills Irish Bar, and The Gatekeeper.

If you’re into real ales then there is the likes of BrewDog and Zerodegrees Microbrewery or if you want somewhere no nonsense then you can’t go too wrong with The Great Western Victorian pub or Wetherspoons owned Princes of Wales.

Located next to a major train station rest assured that there are plenty of dining options nearby such as staple fast food options like Burger King, Greggs, McDonalds and Subway. No more than 10 minutes away is St David’s Dewi Sant indoor shopping centre which has sit-down restaurants such as Nandos, Jamies Italian and TGI Friday’s.

Inside the concourses there are over 15 food kiosks and 27 places to buy an alcoholic drink with visitors served by a catering team which consists of 900 members of staff. Rest assured you will not go hungry inside the Dragons Lair!

Official merchandise of the Welsh National Team can be purchased from The Cardiff Arms which besides from housing a shop, also contains a spacious cafe and bar area. It is named after the former National Stadium where Millennium currently sits, and combined with a tour it can really make for a great afternoon out of the house.

Tours of the Millennium Stadium are available Monday to Saturdays between 10.00 am – 5.00 pm and until 4.00 pm on Sundays. Tours last for approximately 60 minutes and cover such normally restricted areas of the Dragon’s Lair such dressing room, players’ tunnel and pitch.

For more information or to book your place on the tour you can either visit the online box office, phone the reception on 029 2082 2228 or send an email to [email protected]

How to get to Principality Stadium

Where is Principality Stadium?

Millennium Stadium is located within the centre of Cardiff on the eastern bank of the River Taff.

Long stay parking within Cardiff City centre can be somewhat problematic, especially if you plan on getting there only a few hours before kick-off. Whilst there are some parking lots available, unlike Wembley there isn’t an official one which allows you to book in advanced meaning that it can be tough to know where to park.

Your choices are to either use the Park and Ride Service which costs £10.00 and is signposted at Junction 33 of the M4, or to pick out a smaller car-park using this Just Park Map, and hope that there is a space when you arrive.

The Welsh national stadium is located less than five minutes from Cardiff Central Station making it one of the most convenient grounds to visit in the United Kingdom. As it is located in the country’s capital it is unsurprisingly the busiest station in Wales, and is served by direct services to Manchester, Birmingham and London amongst other cities.

Upon exiting the station’s main entrance keep left and follow signs to the stadium. For gates 5,6 and 7 you will want to bear left onto Wood Street, for gates 2,3 and 4 you should exit onto Westgate Street, whilst Gate 1 accessible from Castle Street.

Located centrally within Cardiff there are numerous hotels within walking distance of Millennium Stadium such as Holiday Inn, Travelodge and Cardiff Marriott Hotel. There are enough hotels nearby to suit all budgets and tastes.

Who plays at Principality Stadium?

Welsh side Wales play their home matches at Principality Stadium.

What is the capacity of Principality Stadium?

As of 2022 Principality Stadium has an official seating capacity of 72,500 for Football matches.

When was Principality Stadium opened?

Principality Stadium officially opened in 1999 and is home to Wales

Covid Restrictions may be in place when you visit Principality Stadium in 2022. Please visit the official website of Wales for full information on changes due to the Coronavirus.