The Cardiff City Stadium is a Premier League football stadium in Cardiff, Wales and replaced Ninian Park as Cardiff City’s home ground in 2009.

Cardiff City Stadium officially opened on 22nd July 2009 with a curtain-raising friendly played against Scottish side Celtic. Resulting in a somewhat disappointing draw, The Bluebirds wouldn’t have to wait long for the first victory at the new stadium, with Cardiff defeating Scunthorpe 4-nil in the inaugural competitive fixture on 8th August 2009.

Since 1910, the Welsh club had previously played their matches at Ninian Park, and despite having an impressive record attendance of 57,893 against Arsenal, by the time the ground closed it’s capacity fell to around 22,000.

Containing two large terrace areas, the capacity would have been even lower if it had been converted to all-seating and Ninian was regarded as only being slightly above League One quality.

After previously presiding over the disastrous situation at Wimbledon FC in the late 1990s, Cardiff Chairman Sam Hammam, recognised that The Bluebirds desperately needed to greatly upgrade their facilities if they were to both exist and flourish in the modern era of football.

Working closely with Cardiff City Council, the club were given a period of 12 months in January 2002 to substantiate their plans and to submit a formal proposal.

The Bluebirds soon identified the site of the Athletics Stadium as a suitable location, and slowly but surely brought together a consortium of businesses to help finance the wider stadium complex which eventually consisted of housing and a retail park.

Despite the initial objections that Cardiff couldn’t sustain another large sports venue after the construction of Millennium Stadium, and concerns about the club’s £30 million debt, plans were officially approved on 27th November 2006.

Construction work began early on in 2007 and was completed two years later to a very warm reception. 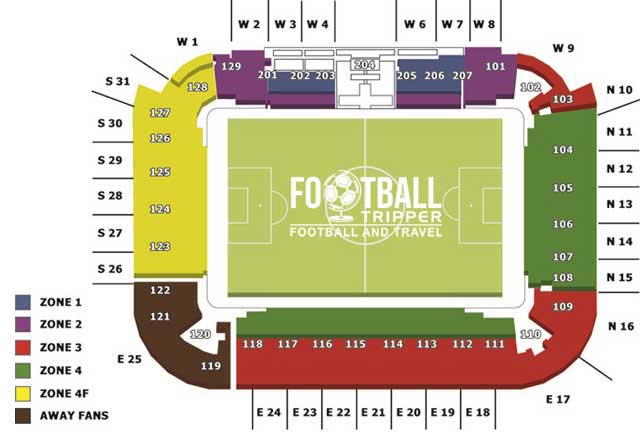 Cardiff’s stadium is comprised of the following four sections: The Canton Stand (North), The Ninian Stand (East), The Grange Stand (South) and The Grandstand (West).

The standard allocation of 1800 or so tickets are distributed in the corner of the stadium between the Grange and Ninian stand, with fans essentially tucked away where many believe they can make the least noise.

Still, the modernity of the ground makes this effort quite futile, with Cardiff City Stadium endowed with good acoustics which encourages a lively atmosphere.

The unfortunate legacy of some sections of the Cardiff City fanbase for hooliganism sort of lives on, with away fans protected by a a few rows of empty seating labelled my many as “no mans land”.

Outside the ground there is further separation by police and stewards, although in actual fact this is often the case at a lot of grounds today, and not a comment upon The Bluebirds.

Inside Cardiff’s Stadium the experience is as you’d expect from a modern ground, with comfortable seating and faultless views of the action on the pitch.

If you do happen to miss any of the goals, the television screen behind you will provide replays which is good to know, and the concourses are efficient and well-spaced out.

Unless you venture north of the the railway line into the Canton Area from Ninian Park Railway station there aren’t really any proper pubs to visit as one might expect to find.

Heading northwards towards where Cardiff’s former ground was located is a bit of an unknown element and although we couldn’t possibly say that all pubs are hostile to away supporters, you’re probably better off drinking at the ground.

Inside the stadium pints of lager (Fosters) and cider (Strongbow) are around £3 quid which is pretty reasonable.

Lastly, if you travel down Lawrenny Avenue towards the rear of Fitzalan High School there is the Gol Five-aside centre and Canton Rugby Club which permit parking and have their own licensed bars.

They are both more than hospitable to away fans.

Outside the stadium, there is a retail area which serves up a range of generic options including McDonalds, KFC and Subway.

Inside Cardiff City Stadium there is also the usual fast food options such as chips, hotdogs and burgers which will give you a a pound or so change from a fiver.

The club shop is only open on matchdays with the store getting busier after lunchtime leading up to the peak, choc-a-bloc times of 1.00pm until kick off:

Note: If there is extra time or penalties then the shop will not reopen after the final whistle.

Currently there is no information on the official website but another website of the clubs tells fans to email [email protected] or phone Richard Archer on 0789132772 to find out more information about a Cardiff City Stadium tour.

Another alternative if you have time is to visit The Millennium Stadium located a few minutes from the central railway station, with tours priced between £4.95 for concessions up to £7.50 for adults.

How to buy Cardiff City Tickets

Cardiff City F.C divide their home matches into three broad pricing categories based on the expected demand and profile of the match with typical adult prices being: A (£40+), B (£35+), C (£30+), with greater discounts for concessions such as children, under 16s, students and OAPs.

Since the club have been relegated to the Championship and more seats are now available after the expansion, these prices have been reduced by quite a bit however, and you should be able to take in a game for around £20.00 or so.

To buy tickets it is recommended that you phone +44 (0) 845 345 1400 or book online, although if the games aren’t sold out then you can buy tickets on the day at one of the booths located around the stadium.

How to get to Cardiff City Stadium

Where is Cardiff City Stadium?

If you are coming up from the motorway, leave the M4 via junction 33 and take the A4232 onwards to Cardiff/Barry, and after 6 miles or so, turn off at at B4267 and then follow the signs to the stadium.

For those thinking about parking at the nearby shopping centre, be warned that there is a 90 minute only limit which according to fans forums is strictly enforced, so either be prepared to leave very early or find another suitable location.

When it comes to trains there are two options depending on whether or not you want to hang around or get moving:

Cardiff city heliport is 4.5 miles away which will take you around 15 minutes in reasonable traffic, with the airport located to the Southwest of the city 12 miles away requiring a 25 minute drive.

There are a lack of hotels directly around the stadium but if you’re planning to make a weekend of it then the city centre is probably more advisable anyway.

Who plays at Cardiff City Stadium?

What is the capacity of Cardiff City Stadium?

As of 2023 Cardiff City Stadium has an official seating capacity of 33,280 for Football matches.

When was Cardiff City Stadium opened?

What is the postcode for Cardiff City Stadium?

The postcode for Cardiff City Stadium is CF11 8AZ.

Covid Restrictions may be in place when you visit Cardiff City Stadium in 2023. Please visit the official website of Cardiff City for full information on changes due to the Coronavirus.