St Andrew’s stadium has been the home ground of Birmingham City Football Club since 1906.

Located in the Bordesley district of England’s second city, the 30,016 capacity ground was last renovated between 1993-1999 and has occasionally seen Premier League football.

Initially consisting of one large grandstand and a single terrace, upon opening St Andrew’s was designed to accommodate up to 75,000 fans. However the record attendance of this period was set at 67,341 during an FA Cup match against Everton.

Located within the industrial city of Birmingham, the Midlands was a target for German attacks during the Second World War, and St Andrew’s unfortunately sustained bomb damage.

Temporarily converted to a fire station, it was perhaps rather ironically that St Andrews later burnt down in an accidental fire, leaving Birmingham F.C to rebuild the stadium in the 1950s.

By the 1980s the facilities were slowly becoming outdated, and combined with the alleged threat of hooliganism in the country there was a growing concern for spectator safety.

High profile stadium disasters such as The Bradford City Fire, and Hillsborough dominated mainstream news coverage, however Birmingham City also suffered its own tragedy during the tumultuous period.  During a match against Leeds United in the 1980s rioting broke out, and a boy was killed, prompting the club to consider wholesale changes.

The subsequent publication of the Taylor Report in the 1990s laid out a vision for the modern stadium, and thankfully Chairman David Gold fully-embraced the ideas despite the club not being legally obliged to conform to them after the club were relegated to the third division.

After lifting Birmingham out of administration, funds were then diverted into a six-year redevelopment plan.

By the end of the 1993-1994 season the Kop and Tilton Road ends were demolished, and replaced by a new L-shaped stand which was completed in November.

The completion of the first phase was marked by a friendly against Aston Villa which attracted a crowd of 20,000 and in 1999 The Railway Stand was built, completing the modern redevelopment of St Andrews.

Below is a seating plan of Birmingham City's St Andrew’s: 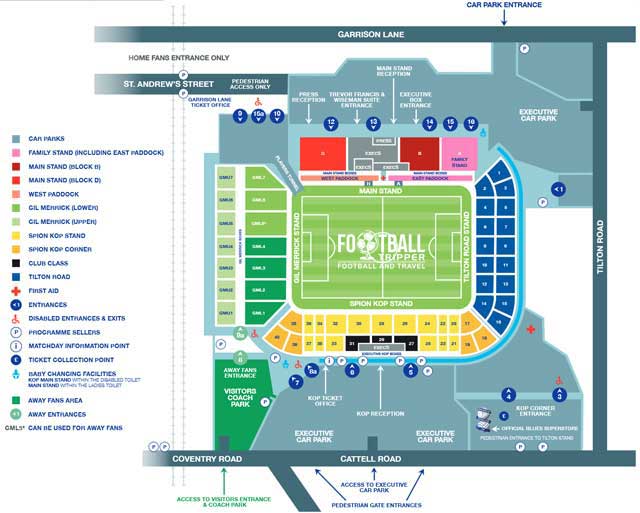 Visiting supporters watching a game at St Andrew’s are housed within one side of the Gil Merrick Stand which takes up the space behind the pitch’s western goal-end.

Divided across two-tiers, the standard allocation of 3,000 tickets occupies the lower, and much larger tier of the stand, with the remaining space both adjacent and above away fans occupied by home supporters.

Separated by a thin-piece of netting, the home supporters who also occupy the Western goal-end can often be hostile to the visiting fans with matters not helped by the fact Birmingham fans can also purchase tickets for the tier directly above as well.

Whilst, some fans may enjoy the lively exchange between sets of fans, it can sometimes be a bit much although the stewards generally do a good job of calming things down.

Inside the concourse it is often quite cramped at half-time although you should definitely make an effort to sample one of the Balti Pies which is somewhat of a local delicacy.

Within the immediate proximity of the ground and Bordesley Station, pubs tend to be occupied by home fans and although they’re not all officially against away supporters they can be somewhat intimidating to enter for the average fan.

Two of the more hospitable bars within 10 minutes of St Andrews are the bar at Hotel Ibis and the Cricketers Arms which is located behind the Morrisons supermarket.

If you are traveling into Birmingham via New Street or Snow Hill Station you are essentially in the centre of the city and there is an abundance of choice.

Located between the two and usually a safe bet is the large Wetherspoons known as the Square Peg although in the evening it is often manned by doormen who may refuse entry to large groups of “visible” football fans.

Nearby to New Street just off the ramp is The Shakespeare Victorian Pub and The Sun on The Hill which both stock a decent choice of real ales.

Nearby to Snow Hill Station there is the Old Contemptibles which is an Oak Bar, or the Jekyll & Hyde, the gin parlour which also stocks a variety of real ales.

Behind the large Morrisons supermarket there is a Dixy Chicken chain which is essentially a KFC rip-off, with an abundance of other takeaway places such as Caspian Pizza. all situated along Coventry Road.

On the roundabout known as Bordesley Circus there is a McDonalds otherwise you can get something at St Andrews which stocks the usual range of matchday food.

Back in the centre of town New Street Station is adjoined to the famous Bull Ring Shopping Centre via a walkway and the eastern wing of this has a solid range of restaurants such as Nandos, Pizza Hut and Jamies Italian.

You also can’t walk 10 minutes or so without encountering either a Tesco Metro or a Subway.

Birmingham FC’s club store located at St Andrew’s is known as the Blues Store and is open on matchdays from 9.00am until kick-off, with the store then reopening for approximately half an hour after the full time whistle.

On non-matchdays the opening times are as follows:

Fans of the Blues can undertake a 90 minute tour of St Andrew’s and see “through the eyes of Birmingham City legends and Discover areas usually reserved for the players”.

Costing just £12 for adults and £6 for everyone else (Concessions included), the tour takes in the home dressing room, the press room, the managers’ dugouts and the players’ tunnel plus much more.

You can book your place on the Birmingham City FC tour by either phoning 0844 557 1875 and selecting option 2, emailing the ticket office ([email protected]) or visiting the club shop in person.

How to buy Birmingham City Tickets

Tickets to see Birmingham play can be purchased in person from the club-shop on non-matchdays and the Kop Ticket Office approximately 3 hours before kick-off.

You can also buy tickets in advance via the club’s official e-ticketing website or via telephone (0844 557 1875 option 2) which might be the safer option to guarantee your seats for the match.

Note: Leeds United may represent a higher-profile level of opposition in the Championship and tickets may be slightly cheaper against the smaller teams in the league.

How to get to St Andrew’s

Where is St Andrew’s?

St Andrews is located within the Bordesley district of Birmingham, approximately 1.7 miles south-east of city centre within the West Midlands.

Birmingham is located within the West Midlands of the United Kingdom and is accessible from anywhere in the country.

Numerous A roads lead you into city from the surrounding motorways such as the M42, M6 and M5.

At St Andrew’s there is a small amount of street parking to be had as well as a modest sized car park located next to the visitors entrance.

For overspill the club recommend the Birmingham Wheels car park which is independently run and fully secure for just £5.00 per vehicle. The address is Adderley Road South, Birmingham. B8 1AD.

Within Birmingham city centre there are in fact three train stations you may arrive into: Birmingham New Street (National Routes),  Moor Street (Regional Routes) and Snow Hill (Both).

You can then catch a train service to Bordesley station which is less than half a mile from St Andrew’s which will leave you with a walking distance of around 10 minutes.

The Hotel Ibis at Bordesley Circus located five minutes away is the nearest hotel to Birmingham FC’s stadium with the remaining options either within the city centre or outskirts of town near to the motorways.

Within the city centre there are numerous affordable hotels behind Birmingham New Street Station such as the Holiday Inn and Radisson Blu and at the Mailbox there are fancier options available for those with bigger budgets.

Who plays at St Andrew’s?

What is the capacity of St Andrew’s?

As of 2023 St Andrew’s has an official seating capacity of 29,409 for Football matches.

When was St Andrew’s opened?

What is the postcode for St Andrew’s?

The postcode for St Andrew’s is B9 4RL.

Covid Restrictions may be in place when you visit St Andrew’s in 2023. Please visit the official website of Birmingham City for full information on changes due to the Coronavirus.