Bloomfield Road known informally to fans as Bloomers is a purpose-built football stadium located in the English seaside town of Blackpool.

Home to local team Blackpool F.C since 1901, the 17,338 capacity ground is the 4th smallest stadium going into the 2015 Championship season before they were relegated.

The land on which Bloomfield Road Stadium sits on has been used to host football matches since at least 21st October 1899 when South Shore F.C played their home fixtures there in the Lancashire League.

Blackpool F.C merged with South Shore, and for a short while played at Raikes Hall Ground before permanently moving into Bloomfield Road at the start of the 1901-1902 season. The newly formed Tangerines beat Doncaster Rovers 3-1 in their first league game their at the start of the season on 12th October 1901.

Upon first opening the ground consisted of a single stand on the western side which was capable of seating 300 fans, and at the time a “good” attendance was regarded as around 2,000 fans.

Additional stands were soon added, and after the construction of a north stand in 1906, Bloomfield Road became one of the few grounds in England at the time to have four stands – one on each side of the pitch.

Continuing to grow in the first half of the 20th century, the capacity peaked at around 40,000 with the record attendance set against Wolves on 17th September 1955. 38,098 fans crammed into Bloomfield road to witness the match. In contrast the record attendance post-millennium was set at just 16,116 against Manchester City on 17th October 2010.

The modern of Bloomfield Road has been characterised by Blackpool’s stadium failing to reach its full potential.

Starting in the late 1980s after the Bradford City Fire, newly introduced safety legislation essentially closed both the south and west stands and at the time, the Clubs Directors saw relocation as the only viable long term solution, attempting to sell Bloomfield Road to off-set increasing maintenance costs.

The Oyston owners originally had similar ideas between 1992-1996, with the club submitting a plan for a new stadium at Whyndyke Farm with the assistance of Sir Stanley Matthews. Nothing materialised however, and Blackpool instead hired Ballast Wiltshire, the designers of the Stadium of Light, to help modernise Bloomfield Road.

Below is a seating plan of Blackpool's Bloomfield Road: 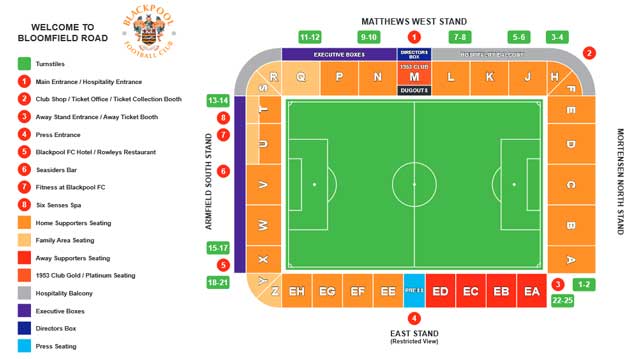 Visiting supporters who wish to see their team take on The Tangerines are housed within the East Stand which occupies the length of the pitch.

Sticking out like a saw-thumb compared to the other three stands which are much larger in stature, the Eastern Stand is known as a temporary stand although it looks like it has become a permanent fixture and will continue to be so for the foreseeable future.

Shared with the home supporters, the standard allocation of around 2,500 tickets is distributed towards the northern-end of the ground, and views within the ground are infamous for being quite poor.

Whilst the distance from the pitch and levels of leg room are adequate with some seats even coming with padding, the implementation of the roof causes a problem.

Constructed with 8 pillars which extend out of the ground right at the front of each section of the stand, there are few seats which offer wholly unobstructed views of the pitch with many fans straining to see build up play if it happens too fast.

The quality of the concourse also leaves a lot to be desired with the temporary nature of the facilities not resulting in the most aesthetically pleasing concourse, although the food on offer fulfills expectations, as does the passionate home fans.

One of the closest and most popular pubs with away fans is The Old Bridge House which is located on Lytham Road less than five minutes west from the main stand. It has a reasonable range of ales, sky-sports beamed across numerous screens and a lively match-day atmosphere.

Second choice is often the Wetherspoons Pub slightly further away outside of Blackpool South Station, known as the Auctioneer.

At the ground itself Blackpool apparently do not serve alcohol to away fans inside the stadium, although I type this hesitantly as it can change on a season by season, match by match basis.

Within the coastal city of Blackpool you’re never too far away from Fish & Chips with numerous outlets situated around he ground and on the seafront itself.

Blackpool’s club shop at the stadium is located next to the ticket office on Seasiders Way and sells everything fans of the Tangerines could ask for. Opening Times are as follows:

Alternatively you can order stuff over the phone (01253 685025) or via the online store: https://shop.blackpoolfc.co.uk/

Blackpool offer fans the chance to learn more about the Seasiders’ history by undertaking a 90 minute tour of Bloomfield Road.

Going behind the scenes at the stadium and taking in usually restricted areas such as the players’ Changing Rooms and the Presidential Suite.

The tour is a a very affordable day out for families, with adult tickets costing £10.00, and for everyone else its just £7.00.

A family ticket for two adults and two children is also available available for just £27.00 which saves a bit of money.

To book your place on the tour and to find out available dates you can either phone 0844 847 1953 (option 3) and select Option 3 or visit the club’s e-ticket site here.

How to buy Blackpool Tickets

Tickets to see Blackpool play in the Championship are capped at £25 and children under 8 and members of the Young Seasiders can attend games with a paying adult for free.

Blocks Q-S, Upper T, Upper U and Right Side Y:

How to get to Bloomfield Road

Where is Bloomfield Road?

Bloomfield Road is located in the north-west English Coastal town of Blackpool in Lancashire.

Based less than 1.4 miles from the city centre and Blackpool pleasure beach,  the club aren’t known as the Seasiders for nothing.

Blackpool is accessible via the M55 Motorway from all routes with the M6 connecting the this stretch of motorway vertically to the UK both north and south.

One you have followed the M55 to the end, take the second exit at the roundabout and head straight onto Yeadon Way.

Follow this road for its duration and it will eventually become Seasiders Way which takes you right up to the stadium.

On-site parking within the ground is limited at Bloomfield Road with Blackpool FC encouraging visitors to use one of the many pay and display car parks within the surrounding roads.

To the North west of the ground there is the Seasiders Way Car Park, from Lytham Road there is the Lonsdale Car park and on Bloomfield road itself there is a car park of the same name and one called the South Shore.

The closest train station to Bloomfield Road is Blackpool south which is exactly half a mile away by foot with a walking time of around 10 minutes.

Blackpool North is located 1.5 miles away with a walking distance of around half an hour.

Although this station is slightly further away it often has more frequent services operating out of it, particularly to other Northern areas of the UK.

This is Blackpool. There are hundreds of hotels located on the Promenade which is less than half a mile from Bloomfield Road.

The two closest to the ground are firstly the Blackpool FC Hotel and Conference Centre which is owned by the club, and secondly the Travelodge South Shore both of which are located to the south less than 5 minutes away.

Who plays at Bloomfield Road?

English side Blackpool play their home matches at Bloomfield Road.

What is the capacity of Bloomfield Road?

As of 2023 Bloomfield Road has an official seating capacity of 17,338 for Football matches.

When was Bloomfield Road opened?

Bloomfield Road officially opened in 1899 and is home to Blackpool

What is the postcode for Bloomfield Road?

The postcode for Bloomfield Road is FY1 6JJ.

Covid Restrictions may be in place when you visit Bloomfield Road in 2023. Please visit the official website of Blackpool for full information on changes due to the Coronavirus.