Ashton Gate Stadium referred by fans as “The Gate“, is a multi-functional football stadium located in the Ashton Gate suburb of Bristol, south-west England.

Home to Bristol City F.C, and recently Bristol Rugby club, the 21,497 capacity ground dates back to the start of the 20th century.

Ashton Gate has been the home of Bristol City since 1904, with the club having previously played at St John’s Lane since 1897. The Gate first opened in 1887 and was originally home to Bedminster FC, however the club ceased to exist after merging with Bristol South End.

The newly formed entity was later absorbed by Bristol City’s and is regarded as a spiritual predecessor.

Located on the southern bank of the picturesque River Avon, Ashton Gate has historically been a rather modest stadium, with the current capacity sitting at 21,497.

Although it has yet to be used for International class football, it has hosted two Rugby matches including an encounter between New Zealand and Tonga on 3rd Octobr 1999 for the Rugby World Cup.

Currently consisting of four disparate stands, the story of Ashton Gate Stadium in recent times has been one of ambitious plans but very little action. After The Robins gained promotion to the Championship in 2006/2007 the club receive planning permission to rebuild the Wedlock Stand, but like the previous plan to redevelop the Williams Stand in 1998, nothing came of it.

One of the main reasons for Bristol City’s hesitancy in redeveloping facilities was that The Robins harboured ambitions of building a brand new stadium.

The club wanted to take a long term approach to modernising their stadium, and in 2009 publicly announced plans to build a 30,000 capacity stadium which could theoretically be expanded to 42,000 for the 2018 World Cup.

After England lost the bid, and the project was fraught with difficulties, Bristol essentially went full-circle and reviewed their former plans for each section of the stadium. The vision is now to develop Ashton Gate into a state-of-the-art 29,000 capacity ground by the end of the 2017 season.

Below is a seating plan of Bristol City's Ashton Gate: 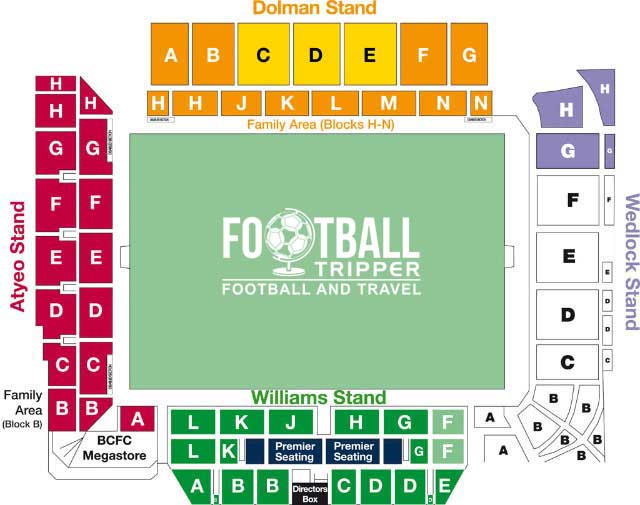 Please be advised, the pictures below are now out of date, three sides of the ground have now been refurbished.

Away fans are housed in the sleek looking Atyeo Stand which first opened in 1994 to replace the aging terrace after the publication of the Taylor report.

The single tiered construction offers unrestricted views regardless of where you are sat, and has decent levels of leg room and comfort as one would expect from a stand less than 25 years old.

Named after the ex-England international club legend John Atyeo who scored 351 goals in 645 appearances for City between 1951-1966, the northern stand is capable of seating over 1,100 away fans with the remainder of the allocation shared with the home supporters.

Note: Seating is unreserved so if you have a preference or want the best seat possible, make sure you get to the ground early.

Whilst there are a reasonable number of boozers around the stadium itself, away fans are often advised to give them a wide berth as they usually only permit home supporters.

Pubs for home fans include The Rising Sun, Coopers Arms and The Robin which is slightly further away although you can always check with doormen/signs.

Bristol City center itself is brimming with pubs and bars, and it is highly unlikely that you won’t find anywhere suitable to drink en-route to the ground. Depending on which train station you are traveling into you have quite a lot of choice.

Close to the Temple Meads Stadion there is the Knights Templar Wetherpoons Pub which is always popular and if the weather permits, heading north to the River Avon to drink at either The Rose of Denmark or the Pump House is always recommended.

Immediately within the environs of Ashton Gate Stadium there are a few restaurants, with the diametrically located KFC and Al’s Tikka Grill two of the more popular offerings on match day due to their proximity.

There are also plenty of other fast-food restaurants such as Chip shops located along the A3029 from Parson Street Station, and the B3120 North street if you are coming in from the direction of Bedminster.

Inside the stadium the typical food fare is of course on offer including sausage rolls, pies and burgers.

Bristol City operate a club shop at Community Stadium without their own online store, although you can purchase official merchandise from the club’s partner Bristol Sport Megastore. The opening times for store at the ground are as follows:

The club shop is also open for a few hours presumably until kick-off when there are home matches but exact opening hours for matchdays are unavailable.

Bristol City buck the trend of lower league teams not doing stadium tours by offering fans the chance to undertake a fully guided 45 minute tour of the facilities at Ashton Gate.

Taking place every other Wednesday at 4.45 pm, the tour costs just £8 for adults and £5 for anyone under 16 and takes in usually restricted access areas such as the home dressing room, the pitch and dugouts, players’ tunnel and even the directors box.

For more information and to book your place you can visit the tour page, phone the ticket office on 0117 963 0600 option 1 or go to the ground and speak to a member of staff at the megastore.

How to buy Bristol City Tickets

Tickets to see City play at home are best purchased online via Bristol Sport E-ticketing site although you could also phone the ticket office on 0117 963 0600, or send an email to [email protected] for more information.

Ticket prices for the Championship are obfuscated due to the online ticket merchant and due to the fact that The Robins haven’t released an official announcement regarding prices. Below is a sample ticket price.


How to get to Ashton Gate

Where is Ashton Gate?

Due to ongoing redevelopment at the stadium there is no on site parking currently available with the club recommending the following option:

The main station of the city is Bristol Temple Meads which is located 2.4 miles north-east of the station with Parson Street being the closest train station to the stadium.

The service to Weston-super-Mare stops at Bedminster and Parson Street Stations with the latter being around 15 minutes walk away from the stadium.

As Bristol City’s ground is located a mile and a half or so from the city centre there isn’t the greatest choice of hotels with smaller Guesthouses such as the Riverview, Glanville and The Luckwell three nearby choices.

Back towards the city centre there is the usual choice of hotels including a Travelodge, Holiday Inn Express and one named after the city, The Bristol Hotel.

Who plays at Ashton Gate?

What is the capacity of Ashton Gate?

As of 2023 Ashton Gate has an official seating capacity of 21,497 for Football matches.

When was Ashton Gate opened?

What is the postcode for Ashton Gate?

The postcode for Ashton Gate is BS3 2EJ.

Covid Restrictions may be in place when you visit Ashton Gate in 2023. Please visit the official website of Bristol City for full information on changes due to the Coronavirus.