Located in Shepherd’s Bush in the borough of Hammersmith and Fulham, the stadium has been home to The Hoops since 1917 with the current capacity standing at 18,439.

The plot of land on which today’s iteration of Loftus Road exists was originally used by Shepherd’s Bush FC who were an amateur football team.

First used on 11th October 1904, the team disbanded during the outbreak of the First World War ten years later, and Queens Park Rangers took over the pitch after their ground at Park Royal was commandeered by the army.

The initial version of Loftus Road consisted of a football pitch and pavilion for changing, and it wasn’t until 1919 that the first stand was erected. Located on Ellerslie Road, it was capable of accommodating 2,950 supporters, and remained the only section of covered seating until 1968.

To some clubs this may have been remarkable, however for such a nomadic club as QPR it is probably explainable. Before moving into Loftus Road the club had played at over 16 venues throughout West London, and even after settling on their permanent hope they flirted with relocation to White City Stadium on two occasions in 1931 and 1962.

The record attendance was set on 27th April 1974 against Leeds United when 35,353 made the trip to Shepherds Bush. Considering that this was during the era of terracing, you begin to get a feel for the relatively small size of QPRs ground.

Renovated over a 13 year period between 1968 and 1981, today’s Loftus Road was already largely converted to all-seating by the time the preliminary Taylor Report was published in 1990.

When QPRs holding company accrued large debts in the late 1990s many were concerned for the future of the club.

There was rumours of a relocation to Milton Keynes and merger with South West London neighbours Wimbledon, however under the ownership of Tony Fernandes the club is on the up, and QPR are now planning to move to a new stadium near Old Oak Common dubbed New Queens Park.

Below is a seating plan of QPR's Kiyan Prince Foundation Stadium: 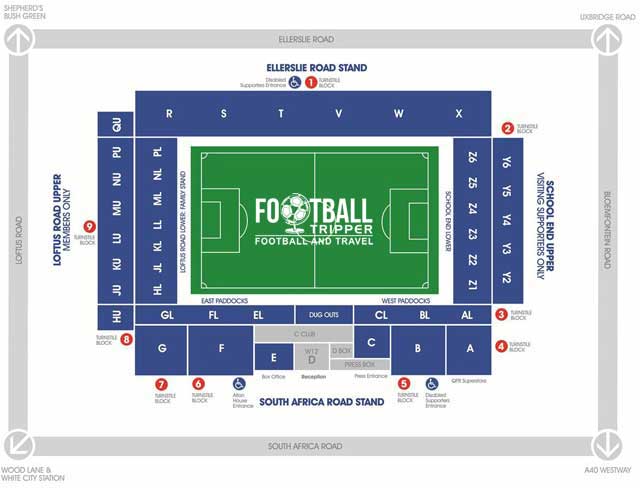 Away fans who make the journey to Loftus Road are housed within The School End which is accessible from Ellerslie Road.

As one of the smaller stadiums in the top-flight of English football the standard away allocation is around 1,800 although if the demand requires it, this can be increased up to 2,500.

A larger travelling contingent sees the visitors take over the entirety of the School End which lies to the Western side of the pitch otherwise just the top-tier is preserved for away fans. Located behind one of the goals with the scoreboard on top of the roof, the School Stand is the smallest section of the ground.

Rather compact with a low-hanging roof, noise travels well inside the ground with relative ease, and it doesn’t take too much effort for small sections of both home and away fans to really be heard.

This is the main benefit of a small stadium, however the leg-room leaves a lot to be desired with expansion a problematic issue within London.

Less than 2 minutes south of Loftus Road Stadium is Uxbridge Road which is lined with pubs and fast food outlets.

None of them are overtly marketed as supporters bars for Queens Park Rangers fans however on matchdays many have doormen who refuse to admit travelling supporters.

Bars tend to be inconsistent in enforcing this policy so there’s no harm in simple walking along the road and seeing where you get in – after all there is a high-density of pubs on hand.

An alternative option is to get off at Shepherds Bush (On Hammersmith and Circle line) where there are several more relaxed bars.

Right outside there is a Belushi’s sports bar, and across the other side of the common is a BrewDog Bar which serves a fine selection of Scottish craft beers for fans of real ale.

Remember you can also easily get a pint from the main station you travel into London from such as Victoria, Paddington or St Pancras, as well as inside Loftus Road itself.

Whilst there aren’t loads of franchised restaurants around QPR’s Ground, Uxbridge Road has an extremely diverse range of dining options which really does take you all around the world.

Next to Shepherds Bush Common you have Jamie’s Italian, whilst next to it is Abu Zaad which is a Syrian restaurant, and beyond that there’s Esarn Kheaw Thai resturant.

This is of course sandwiched between a Nepalese Tandoori, and Ochi Caribbean place. Cosmopolitan.

QPR operate a stadium superstore in addition to their own official online shop: https://www.shop.qpr.co.uk/gb/. The opening times for the store are as follows:

It doesn’t appear as if Queens Park Rangers currently offer fans the chance to undertake a stadium tour of Loftus Road.

How to buy QPR Tickets

The Hoops operate a three tier category system based on the opposition, with the quality of seats then also contributing to how much you’re likely to pay.

How to get to Kiyan Prince Foundation Stadium

Where is Kiyan Prince Foundation Stadium?

Loftus Road is located in Shepherd’s Bush which falls under the West London borough of Hammersmith and Fulham.

Depending on your definition, it is around 6 miles away from Central London.

The stadium’s address for satnav:

As this is densely populated Western London, parking is extremely limited around Loftus Road with the journey by car not advisable at all.

Use London’s excellent public transport instead!

If you’re visiting London and live elsewhere then likely you will be travelling into a large national train station such as London Victoria, Kings Cross/St Pancras, Liverpool Street or Paddington.

One you have gotten of the train you will likely see a signs for the London Underground (refer to tube section below).

The nearest Overground train station to Loftus Road is at Shepherd’s Bush which is only round the corner from the tube station of the same name.

You can catch direction services from major transport hubs such as Euston Station, Clapham Junction and Stratford.

Located in West London, hotels are generally expensive, and the cost is only exacerbated if you don’t book months in advanced.

With Loftus Road located on the tube line, don’t feel restricted to the areas immediately around the ground with nearby stops such as Hammersmith having more choice. There is a Premier Inn there for example and is much better for making a weekend of it.

What is the capacity of Kiyan Prince Foundation Stadium?

As of 2022 Kiyan Prince Foundation Stadium has an official seating capacity of 18,439 for Football matches.

What is the postcode for Kiyan Prince Foundation Stadium?

The postcode for Kiyan Prince Foundation Stadium is W12 7PJ.

Covid Restrictions may be in place when you visit Kiyan Prince Foundation Stadium in 2022. Please visit the official website of QPR for full information on changes due to the Coronavirus.