Stadium mk sometimes referred to as Denbigh Stadium after the area it is located within, is a multi-purpose sports venue located in Milton Keynes, Buckinghamshire.

The inaugural match against Stadium MK was held against Chelsea in the summer of 2007, however the ground was officially opened by the Queen almost four months later on 29th November 2007.

It was originally hoped that the stadium would have been complete in time for the 2004-2005 season, however circumstances surrounding the construction were far from straightforward.

A consortium led by Pete Winkelman and a handful of large retailers proposed a football league quality stadium embedded within an out of town shopping centre in Milton Keynes.

As the city lacked its own professional football club, the consortium targeted Wimbledon FC, who were a former Premier League club based 56 miles away in south in London.

After the publication of the Taylor Report in 1990 which introduced new legalisation regarding spectator safety, Wimbledon’s Plough Lane Stadium was eventually closed as the costs of renovation were economically unfeasible.

The Dons ground shared Selhurst Park with Crystal Palace, but where eventually acquired by the predations of the Milton Keynes based businessmen.

Upon moving to Milton Keynes the football team retained the name “Wimbledon FC”, and played at the former England National Hockey Stadium until the end of the 2003-2004 season.

Rebranded as “MK Dons”, the year after, the new stadiums construction and the Football Association’s franchise-friendly precedent was set.

Stadium MK consists of a two-tier bowled design, although initially seating was only added to the lower-tier due to concerns that the ground was too large for the region’s fanbase.

Seats have since been added to the lower tier with the record attendance currently set at 26,969 when MK took on, and defeated Manchester United 4 nil in the League Cup on 26th August 2014.

Below is a seating plan of MK Dons's Stadium MK: 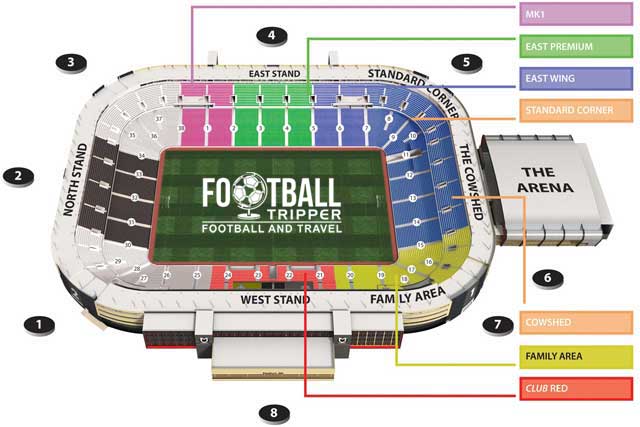 Stadiummk is a modern stadium and as a result each stand is uniform in appearance with all four (North, East South aka the cowshed, West) all combining to form one continuous bowl.

Away fans are now housed within the Top Tier of the North East Corner with a standard allocation of around 3,000 seats.

That isn’t the only advantage of the large size of the stadium however, with almost universal praise for the comfort levels of the seats within the ground.

The seats are large and padded similar to those of The Emirates, and each place in the stand is afforded a generous amount of leg room ensuring the gentrified and more elongated fan doesn’t suffer from cramp.

Lastly, another great thing about Stadium MK is the design of the concourse which is sandwiched between the two-tiers of seating.

It allows a great deal of natural light in, and you can grab some food whilst still being able to watch the action on the pitch. Plus the toilet facilities are a cut above the usual dingy urinals found across stadiums the world over.

At the stadium there is the Red Dot Bar which is popular with the home supporters, although it also welcomes some away fans providing they are on their best behaviour.

The next closest pub is probably The Inn on the lake however there are some conflicting reports on how receptive they are to supporters on matchday.

Depending on which train station you alight from there are a number of choices.

For Milton Keynes Central Station there is a Wetherspoons, from Bletchley there is The Enigma Tavern and from Fenny Stratford there is the Swan Hotel Spors Bar.

Within the family area there are Burger Vans and Pick N Mix stalls between Gate 6 and 7 with the rest of the stadium suitable furnished food stalls.

To the south of the stadium there is a prominent Asda supermarket and to the east there is a McDonald’s and KFC.

Towards the north-west there is the adjoining shopping centre which has plenty of other sit-down restaurant choices including Nando’s and Pizza Express.

Milton Keynes operates two club shops within the immediate environs of the stadium in addition to their official online store, MK Dons Direct.

The opening times/hours for the two stores are listed below:

The club shop at the stadium also doubles as a ticket office. Open until half time and for 30 minutes after the full time whistle. Opening Times:

It doesn’t look like Milton Keynes Dons currently offer a stadium tour but expect this to change in the coming seasons now that the final stage of the stadium is almost complete.

How to buy MK Dons Tickets

You can purchase tickets to see MK Dons play at home via the usual channels: Via telephone (01908 622900), email ([email protected]), in person at either store or on the internet from the club’s online box office.

Prices for League One are as follows, although expect them to be slightly more expensive for the Championship:

Occasionally the club will run Family Fun Day promotion which almost halves the price of ticket in some cases, so it’s well worth looking out for these if you want to see Milton Keynes play and have a family.

You can also receive discounts of up to £2.00 for adult tickets if you become a Club Dons member for the season which costs just £10.00, although this only makes sense from a financial perspective if you plan to attend at least six matches.

How to get to Stadium MK

Where is Stadium MK?

Stadium MK is located within the Denbigh district of Milton Keynes which belongs to the south-central county of Buckinghamshire.

It was constructed within an out of town shopping centre near to the A5 dual carriageway.

There are parking spaces available at the stadium for the princely sum of £7 although these fill up fast and if you’re unable to get one then you could potentially be entering a parking minefield.

The surrounding shops each have different parking restrictions, and none of them are particularly match day friendly with on the spot £60 fines issued for those who flout the rules.

Fenny Stretford is technically the closest train station to the Milton Keynes ground but Bletchley is a larger and often more reliable station, particularly for evening kick-offs.

With Bletchley located around 1.6 miles from the stadium with Fenny slightly less at around 1.3, both stations will take the average person no more than 25-30 minutes to walk which is a perfectly reasonable amount of time.

Both stations are situated on The Marston Vale Line with London Midland operating services between Birmingham New Street and London Euston, with clear signage guiding fans to Stadium MK from both routes.

As for Milton Keynes Central Station this is around 45-55 minutes away by foot with a distance of approximately 2.7 miles. You can catch a Taxi from the station for a fixed fee of £9 from the Hackney Carriages but private hire cabs may be slightly more expensive.

On the site of the stadium there is a DoubleTree by Hilton which whilst it can’t be beaten for proximity, it is likely to be expensive and busy unless you book months in advance.

For a ground located in a out of town shopping centre there aren’t loads of hotels nearby with the majority of accmodation options located back towards Milton Keynes central.

Between the stadium and Milton Keynes Station there is a Premier Inn near Furzton Lake and southwards towards Bletchley Station there The Park Hotel.

Who plays at Stadium MK?

What is the capacity of Stadium MK?

As of 2023 Stadium MK has an official seating capacity of 30,500 for Football matches.

When was Stadium MK opened?

What is the postcode for Stadium MK?

The postcode for Stadium MK is MK1 1ST.

Covid Restrictions may be in place when you visit Stadium MK in 2023. Please visit the official website of MK Dons for full information on changes due to the Coronavirus.