The Valley is the 27,111 capacity home ground of Championship side Charlton Athletic Football Club.

First constructed back in 1919, three of the four stands were built over a seven year period from 1994-2001 with numerous renovations occurring throughout the stadiums history.

Before permanently settling on the site of The Valley, Charlton mirrored the nomadic tendencies of London neighbours, QPR and Fulham, by playing across a variety of venues in the club’s formative years.

At the end of the First World War a chalk quarry was identified as a potential playing field, and Charlton quickly got to work levelling the playing field by removing large debris and rocks.

Initially rather spartan in appearance, the south-east London club lacked funding and had to rely on the help of volunteers from the Addick’s fanbase. The first iteration of the ground contained no physical stand, and instead consisted of mounds of earth which surrounded the pitch.

During the 1923-1924 season the club temporarily moved to Mount Stadium after flirting with the prospect of a merger with Catford South End F.C however it fell through and the club returned to The Valley.

Before the onset of the second world war, The Valley developed into one of the largest stadiums in Europe, attracting a record attendance of at least 75,000 during an FA Cup match against Aston Villa in 1938.

In the 1950s the club continued to draw a strong support of around 40,000 fans per match, however the sacking of Jimmy Seed, Charlton’s most successful manager saw the Addicks shortly relegated to the second division in 1957.

With performances stagnant on the pitch resulting another relegation in 1972, this time to the third division, local support began to dwindle and a vicious cycle began where the club lacked the required money to improve the team and facilities.

Following high-profile stadium disasters in the 1980s such as the Bradford City Fire and Heysel the football association began to introduce a series of reforms aimed at targeting spectator safety.

Unable to fund such renovations, Charlton were forced to leave the Valley and ground share Selhurst Park between 1985-1991 and Upton Park during the 1991-1992 season. After years of vigorous campaigning and lobbying Greenwich Borough Council, funds were finally raised to convert The Valley to all-seating in December 1992.

This allowed Charlton to return to their home, and completely rebuild three out of four of the Valley’s original stands.

View of The Valley

Below is a seating plan of Charlton Athletic's The Valley: 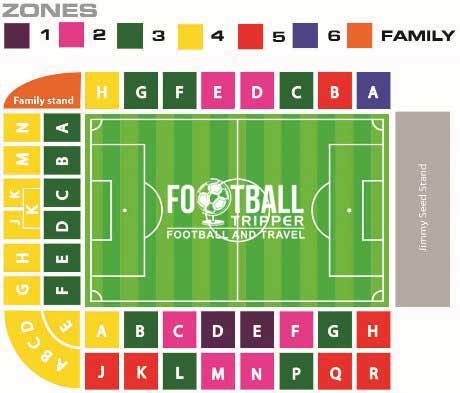 The Valley is comprised of the following four sections: North, East, The Jimmy Seed Stand (South) and The West Stand.

The Valley Away End

Away fans who wish to watch their team take on Charlton are housed within the Jimmy Seed Stand which occupies the space behind the southernmost goal in the stadium.

Sort of a peculiarity, it is noticeably the smallest stand in the ground, and is massively out of proportion compared to its opposite number, the north stand.

In actual fact it is capable of accommodating 3,000 traveling supporters so compared to some lower-league stadiums it’s not that small, it’s just it would appear that this section of the ground hasn’t kept apace with the other developments at The Valley.

Nothing highlights this more than the intrusive support beam which restricts a lot of views of the pitch, the only one in the stadium it is worth noting.

If the away allocation fails to sell out, and demand for home tickets is high, occasionally the Jimmy Seed stand will be shared with some home supporters. Otherwise, the two-kiosks and other facilities inside the concourse are the preserve of the away football trippers.

Visiting fans will be in for a treat when going to the Valley as the three nearest pubs to the station are all more than welcoming, with home fans  seemingly capable of mixing with counterparts in this part of London.

Upon exiting Charlton station, turn left onto Delafield Road and then left once again onto Charlton Church Lane. Proceed northwards over the track to the Antigallican which is a Victorian hotel complete with bar.

No further than 10 minutes west in the direction of Asda along the A206 is the Rose of Denmark and The Pickwick which are decent backups if the Antigallican is too full, as is often the case on matchdays.

At the ground itself there are the usual range of drinking options including at least one type of lager and ale.

On route to the stadium there is an abundance of takeaway and fast food options located on Charlton Church Lane.

After turning left from the station walk towards the Sainsbury’s and then proceed further down south away from the railway track for more options such as Charlton Kebab House.

Charlton Athletic’s club store is located at the stadium and is contactable via telephone (0208 333 4035) and email ([email protected]).

The shop currently has the following opening times:

Alternatively you can browse and purchase all your Addicks related merchandise from the official online store.

In the past the club have operated stadium tours but the website currently lacks up to date information regarding availability for the general public.

The contact information for corporate clients who want to book the pitch between April 28th and May 18th is as follows: Telephone (020 8333 4040) Email ([email protected]) and the person at the other end of the line should be able to advise you better.

How to buy Charlton Athletic Tickets

Charlton operate a two-tiered pricing structure based on the predicted profile of the matches with fixtures either falling under the Addicks Gold or Silver category.

For Championship matches there are just six Gold matches and these are confirmed to be against Millwall, Cardiff City, Brighton & Hove Albion, Norwich City, Fulham and Leeds United. Prices for these matches start from £19 for adults, £15 for over 60s and under 21s.

The easiest place to book tickets and compare seat prices is Online via the club’s Online ticket office but you can also purchase your tickets via the telephone (03330 14 44 44) and in person at the ticket office/club shop at the stadium.

The club does sell some tickets on the day of the match from the two Valley Gold windows next to turnstile 13 but it’s usually safer to book in advance.

How to get to The Valley

Where is The Valley?

The Valley’s stadium address for satnav is as follows:

Free parking is available at the ground during the week but is restricted on matchdays to permit holders only which certainly isn’t very helpful, with the nearby residential areas equally off-limits to visiting supporters.

We will update as soon as we know of a decent car park, although most probably you’ll be visiting via public transport.

Charlton Railway Station is basically on the door step of The Valley as it is located less than 200 metres from the ground.

From Delafield Road briefly turn right onto Charlton Church Lane follow by a sharp left to Floyd Road. Follow this to the end and you are now at The Valley.

Public Transport of The Valley

Hotels Near The Valley

The closest hotel to The Valley is probably The Antigallican located north of the railroad track just off of Woolwich Road.

If you follow this road slightly further west there is the Greenwich and Angerstein Hotel with a Holiday Inn Express located back towards the O2 Arena.

As this is London with fantastic public transport and lots to see in the centre my advice would be to not feel to restricted to hotels near Charlton.

Who plays at The Valley?

English side Charlton Athletic play their home matches at The Valley.

What is the capacity of The Valley?

As of 2022 The Valley has an official seating capacity of 27,111 for Football matches.

When was The Valley opened?

What is the postcode for The Valley?

The postcode for The Valley is SE7 8BL.

Covid Restrictions may be in place when you visit The Valley in 2022. Please visit the official website of Charlton Athletic for full information on changes due to the Coronavirus.