Dating back to 1906, the home of the Railway Men has a current capacity of 10,153 with a complete rebuild of all four stands occurring in the 1990s.

Although many fans refer to Crewe Alexandra’s stadium as Gresty Road, officially it is known as Alexandra Stadium.

The distinction may sound slightly pedantic, however there has actually been two different stadiums located on Gresty Road, the original Alexandra Recreation Ground, and the current one Alexandra Stadium.

Crewe started out playing at Alexandra Recreation Ground however they temporarily left this stadium towards the end of the 1895-1896 season, choosing to play at a variety of local venues such as Sandbach instead. However less than a year later the club returned to their old Recreation ground in 1897.

The club continued to play here until 1906 when Crewe received a compulsory purchase order and were forced to abandon the pitch so that a new railway line could be constructed. The new stadium on Gresty Road was shifted a short distance away from the original, to the west.

New Gresty Road at the beginning consisting of very modest facilities, with embankments surrounding the perimeter of the pitch instead of stands. A new main stand was constructed on the southern side however it was destroyed by fire in 1932. The ground’s capacity peaked in the 1960s when 20,000 fans attended an FA Cup match against Tottenham on 30th January 2006.

Today, Gresty Road is a relatively contemporary stadium having been completely rebuilt in the 1990s. In the wake of the Hillsborough disaster the club recognised the importance of becoming all-seater, and chose to renovate each stand.

Below is a seating plan of Crewe Alexandra's Mornflake Stadium: 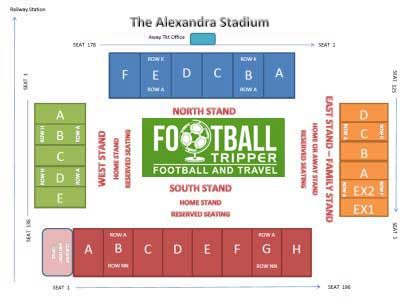 The ground is made up of the following four parts: Away Stand (North), Family Stand (East), The Main Stand (South) and Home Stand (West).

Visiting fans are housed in the delightfully sounding Whitby Morrison Ice Cream Van Stand which is capable of holding up to 1,680 supporters.

Although we have no confirmation that Ice Cream is in fact on sale within the concourse, we understand that it can get cold during the winter as the stand is not shared with home supporters, thus increasing the exposure to the elements.

The Ice Cream Stand which runs for the length of the pitch along the northside appears to be quite dated in appearance.

The ancient turnstiles you are required to pass through give you the first indication of this, and once you are in the stand itself, the old support beams for the roof provide further confirmation of the structures antiquity.

As the stand rarely sells out you can usually shuffle around in seats if the pillars are proving to be too problematic when trying to watch the match, although the lack of alcohol on sale inside this part of the stadium is probably a larger bone of contention.

There are a few decent pubs located on Nantwich Road which is the main road of the city and the one right outside Crewe station (Crewe Arms).

The first one you will encounter is around 100 meters or so past the turn for Gresty Road is the Royal Hotel which has separate bars for both home and away supporters.

The second which is slightly further along is called The Last Orders Inn which is smaller in size and generally caters to fans of real Ale.

Otherwise if you get to Gresty Road early enough you can get entry to the supporters club which permits a small number of away fans, and usually has a great atmosphere on matchdays.

Focusing on Nantwich Road once again there is an embarrassment of cheap and cheerful fast food places such as TJS Fish & Chips and Apos Kebab House.

Giovannis does pizza and there are also one or two curry houses such as Dine India and Passage to India.

On Gresty Road itself there are one or two food trucks which sell the standard fayre, as is the case inside the stadium.

It doesn’t appear as if Crewe Alex currently offer fans the chance to undertake a stadium tour of Gresty Road. If this changes, we’ll be sure to update this section.

How to buy Crewe Alexandra Tickets

Tickets to see the Railwaymen at home can either be purchase via phone (01270 252610), in person at the ticket office at the stadium which is located at the club shop during weekdays, or within the main stand on the day of home fixtures.

Unfortunately the club  haven’t gotten with the times, and as such, fans are unable to purchase their tickets online from the convenience of their own homes.

How to get to Mornflake Stadium

Where is Mornflake Stadium?

Alexandra Stadium is located between Gresty Road which is where the popular nickname comes, and the railway line, approximately 1.1 miles south of Crewe city centre.

Alexandra Stadium’s Address for satnav is as follows:

At Gresty Road there is a decent sized purpose built car park which has space for exactly 564 vehicles. It costs just £3.50 to park for the duration of the match plus time before/after and is free for Blue Badge holders

Crewe Alexandra stadium is exactly 0.3 miles away from Crew railway station, with the journey on foot likely to take even the most unfit amongst us no more than 5 minutes.

Once you’re at the train station exit left out of the main foyer onto Nantwich Road out and then take the first left down Gresty Road and Bob’s your Uncle.

The closest hotels to Gresty Road are either The Royal Hotel (5 Bars and a Disco apparently) or The Brunswick (Named after the road it is situated on) with the Crewe Arms Hotel literally on the door stop of the station.

Across the rail road tracks to the east of Crewe’s stadium there is a Holiday Inn Express and a Premier Inn Central hotel which can be cheaper if you have a voucher or book in advance.

Who plays at Mornflake Stadium?

What is the capacity of Mornflake Stadium?

As of 2022 Mornflake Stadium has an official seating capacity of 12,700 for Football matches.

When was Mornflake Stadium opened?

What is the postcode for Mornflake Stadium?

The postcode for Mornflake Stadium is CW2 6EB.

Covid Restrictions may be in place when you visit Mornflake Stadium in 2022. Please visit the official website of Crewe Alexandra for full information on changes due to the Coronavirus.