Whaddon Road or The World of Smile Stadium for sponsorship reasons, is a purpose built football stadium located in the large spa town of Cheltenham, Gloucestershire.

First opened in 1927, the 7,066 capacity ground is comprised of four distinct stands resulting in a mixture of both seating and terrace places.

Today’s Abbey Business Stadium is located on the former site of The Berkeley Hunt Kennels which were built by the local Cheltenham Original Brewery in 1927.

Home to Cheltenham Town since 1932, the club marked their 70th anniversary by earning promotion to the Football League Second Division which translates as the third tier of English Football or today’s equivalent of SkyBet League One.

Shared with Conference North side Gloucester City A.F.C, the record attendance is set at 8,326 for a 1st round FA Cup game against Reading in 1956 17th November and with a current capacity of 7,066 it’s unlikely that this record will be beaten any time soon.

Particularly as Whaddon Road is consistently the smallest capacity stadium in League One whenever the club compete in this division.

In April 2009 The Robins announced a sponsorship deal which saw Whaddon Road be known officially as The Abbey Business Stadium,  not to be confused with Cambridge United’s Stadium. Previously it was known as the 1984-esque Victory Sports Ground.

Whaddon Road has a fairly contemporary feel to it with two out of four stands opening post-millennium, including the Hazlewoods Stand which opened in December 2005, and Thomsom and Bancks which was completed in 2001.

Furthermore between the two new stands the corner are now filled in which although not used for seating, is still adds to the character of the ground.

Below is a seating plan of Cheltenham Town's Jonny-Rocks Stadium: 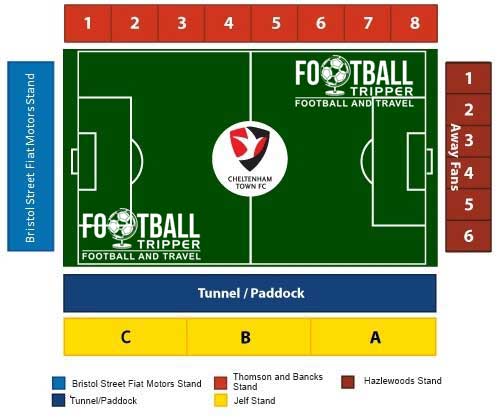 The four stands at Whaddon Road are as follows: Prestbury Road End (North), Thomson and Bancks Stand (East) on Wyman’s Road, Hazlewoods Stand (South) which is where the away fans are housed and lastly Jelf Stand which is the main stand (West).

By default visiting supporters are housed within the 1,100 capacity Hazlewoods Stand which is a covered area of seating.

However if the number of fans expected to travel is larger than the usual then, the allocation will be increased up to 1,800, with additional space made available in the nearby Wymans Road Stand.

Hazlewoods Stand is situated behind the Waddon Road goal and the Wymans Road Stand is located to the side with views of the bucolic Cotswold Hills easily viewable from within the ground.

Located just 15 minutes away from the town centre there are numerous pubs en-route to Whaddon Road with Cheltenham FC’s website  recommending the following places:

At the stadium itself there is The Robins Nest which allows both sets of fans inside for the small price of £1.00, although the club may turn away some travelling fans if the match is regarded as high-profile.

Besides the expected fast food outlets within the town centre there are two fish and chip ships near the stadium with one on Whaddon Road itself just 150 years past the stadium and the other next to the Sudley Arms pub on Prestbury Road.

The stadium bar which is open to everyone also serves hot food between 12.00 – 2.45 pm and light snacks on offer between 5.00 – 10.30 pm with the concourses inside the stadium itself offering fans the usual range of football snacks.

Think pies, hot dogs and burgers with a hefty half-pounder cheeseburger available for a bargain £4.00.

Cheltenham town operate a club shop at Whaddon Road stadium in addition to their own official online store.

For more information, to confirm opening times or to check availability feel free to send an email to [email protected] or phone the store on 01242 573558.

It doesn’t appear as if Cheltenham Town FC currently offer fans the chance to undertake a stadium tour of Whaddon Road.

How to buy Cheltenham Town Tickets

Tickets to see The Robins can be bought via the usual channels including telephone (01242 573558), email ([email protected]), in person at the stadium ticket-office/club shop (Tuesday to Friday 10.00 am – 4.00 pm) and on the internet by visiting Cheltenham Online Tickets.

Ticker Prices for the 2015 season are as follows:

How to get to Jonny-Rocks Stadium

Where is Jonny-Rocks Stadium?

There is usually a free match-day shuttle bus which takes you to the ground unless the club says otherwise which runs from the nearby Cheltenham Racecourse which has a decent sized car park.

Away fans are welcome on the shuttle-bus service.

The closest railway station is Cheltenham Spa which is approximately two and half miles from the club’s ground.

Located on the other side of Cheltenham, the walk is just over 2 miles long which will probably take anywhere between 35-50 minutes depending on your levels of fitness (and how many pubs you visit).

As a back up a taxi will likely set you back around £10.

The nearest hotel is the Cotswold Grange Hotel but this may be slightly too expensive for the average football fan, myself included.

Back towards town there are plenty of options with the likes of the Central Hotel,  The Big Sleep Hotel and the Holiday Inn Express all offering satisfactory accommodation for the night or weekend.

Who plays at Jonny-Rocks Stadium?

What is the capacity of Jonny-Rocks Stadium?

As of 2023 Jonny-Rocks Stadium has an official seating capacity of 7,066 for Football matches.

When was Jonny-Rocks Stadium opened?

What is the postcode for Jonny-Rocks Stadium?

The postcode for Jonny-Rocks Stadium is GL52 5NA.

Covid Restrictions may be in place when you visit Jonny-Rocks Stadium in 2023. Please visit the official website of Cheltenham Town for full information on changes due to the Coronavirus.