Kenilworth Road is a purpose built football stadium located in the Bedfordshire town of Luton which is 30km North of London.

Home to lower league team Luton Town F.C, the 10,226 capacity ground dates as far back as 1905 which makes the facilities in spirit, over 100 years old.

Kenilworth Road has been home to Luton Town since 1905 when they relocated away from Dunstable Road after the land was sold by The Duke of Bedford to be used for housing development.

Originally known as Ivy Road, many fans believed that a move to the new ground coincided with a period of success after Luton Town recorded a fourth place finish in the Southern League after finishing second from bottom in the previous season.

Improvements at Kenilworth Road tended to happen erratically with renovations made in the period immediately following the war and then nothing at all for the next decades until the late 1980s.

Located within a busy residential area with one turnstile even embedded within a terraced house, improving the ground requires lengthy planning and consideration of local residents.

This may explain why the club have reportedly been looking to move to a new ground as far back as in 1955.In the 1960s there were proposals to move to Milton Keynes and play as The MK Hatters which attracted vehement opposition from local fans.

The closest Luton have come to a relocating to a new ground was in 1995 when Chairman David Kohler envisioned a 20,000  stadium known as  the impressive sounding “The Kohlerdome”.

Plans were sadly rejected by the Secretary of State in 1998 when they were deemed unfeasible due to the inadequate capacity of  the M1 motorway.

Below is a seating plan of Luton Town's Kenilworth Road: 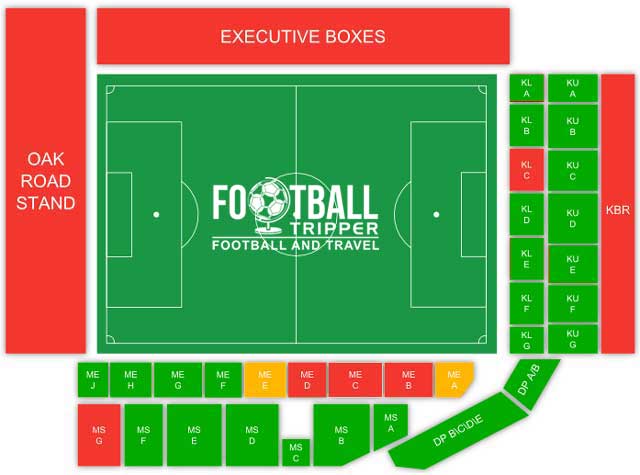 Away Fans have a ticket allocation of approximately 1,000 which is distributed along one side of the Oak Road Stand .

Assigned as the away stand since the early 1990s, the stand which occasionally hosts home supporters for the larger matches depending on demand feels slightly antiquated but with the exception of the supporting pillar, everything else is how it should be: close views of the pitch, friendly stewarding and decent acoustics.

Visiting fans enter the ground through the slightly surreal entrance on a residential terrace of houses.

After recovering from the shock of entering somebody’s house and exiting again through their garden, you will eventually enter the stand and similar to the terraced street, you will be in for an intimate ninety minutes of football.

At Kenilworth Road there is the club run “Luton Bobblers Bar” which is located within the Oak Road stand between the away turnstiles and the entrance to the ground.

With an entrance fee of just 50p and with an unbeatable location this is one of the most popular places to sink a few pints before the match.

Accessibility depends entirely on how busy it is, and whether or not Luton are accepting away fans.  You can forget any derby against Watford for example or any equally high profile match, however typical away fans are permitted.

Since the closure of the Bedfordshire Yeoman Pub Hatters fans have bemoaned a lack of choice of pubs near Kenilworth Road with some even having to resort to drinking at the Beech Hill Conservative Club on Leagrave Road.

In the centre of town there is The Wetherspoons pub on Park Street known rather fittingly as as the London Hatter.

Some fans will find the selection of refreshments to be slightly limited but it’s not as if you’ll starve as the usual suspects are ever-present including burgers, pies and sausage rolls.

Luton FC operate a club shop at Kenilworth Road (actually located on this road FYI) in addition to their own official online website known as Hatters World.

For the latest information, to confirm opening hours or to check availability of the new shirt feel free to send an email to club ([email protected]) or phone the store on +44 (0)1582 488864.

It doesn’t appear as if Luton Town currently offer fans the chance to undertake a stadium tour of Kenilworth Road.

How to buy Luton Town Tickets

Tickets to see The Hatters  can be purchased via the usual channels including telephone (01582 416976), in person at the Kenilworth Road ticket-office (Monday – Friday 10.00am – 5.00 pm) and on the internet by visiting Luton’s E-ticketing website.


How to get to Kenilworth Road

Where is Kenilworth Road?

Kenilworth Road is located within a residential area less than 1 mile from the historic town centre and railway station.

No matter where your starting point is almost everyone who drives to Luton by car does so via the M1.

Kenilworth Road Stadium’s address for satnav is as follows:

Luton Railway Station is located 1 mile east of Kenilworth Road with the distance likely to take the average person around 20 minutes to walk.

The town is served by First Capital Connect Services which depart every 10 minutes or so to London’s main terminals such as St Pancras International, London Bridge and Blackfiars.

There are also services by Midland Mainline to places such as Nottingham and Birmingham.

The nearest hotel appears to be the dubiously named “Quality Hotel Luton” north-west of the stadium on Dunstable Road with more choices to be found nearer the centre of town.

Within the Mall there is a Best Western, south of this there is a Premier Inn Luton and next to the station is a easyJet owned, no-frills, easyHotel.

Who plays at Kenilworth Road?

What is the capacity of Kenilworth Road?

As of 2022 Kenilworth Road has an official seating capacity of 10,356 for Football matches.

When was Kenilworth Road opened?

What is the postcode for Kenilworth Road?

The postcode for Kenilworth Road is LU4 8AW.

Covid Restrictions may be in place when you visit Kenilworth Road in 2022. Please visit the official website of Luton Town for full information on changes due to the Coronavirus.