Located in the borough of Hertfordshire approximately 17 miles North-west of central London, the 17,477 capacity ground will soon be expanded to 21,277 following the construction of a new East Stand.

Vicarage Road has been the home of Watford F.C since 1922, with the club and its spiritual predecessors previously having played football at a variety of grounds including Cassiobury Park, Vicarage Meadow and Market Street.

The ground officially opened on 30th August 1922 with a ceremony conducted by Col. Charles Healey and a friendly match against Millwall F.C.

The Hornets purchased the freehold of the site from Benskins Brewer in 2001, however the club shortly encountered financial difficulties afterwards and were forced to sell it for £6 million.

Thankfully, the club had a buy back clause and after several fund-raising events including a concert by Elton John, the club restored full ownership in September 2004.

After the East Stand was demolished and replaced by the Sir Elton John Stand in May 2014 Vicarage Road was no longer comprised of its original parts.

The Eastern stand was the oldest part of the ground, having first been built in 1922 after the club had moved from Cassio Road. To mark the opening of the new stand the club took on Udinese Calcio in a friendly on 2nd August 2014.

When the Taylor Report was published in 1990 Watford’s ground was converted to all-seating, in order to comply with newly introduced stadium legislation.

As the facilities were generally dilapidated, two new sections were built with the Vicarage Road Stand completed at the end of the 1992-1993 season, followed by the Rookery Stand during the 1994-1995 season.

The Graham Taylor Stand named after the club’s most successful manager which we’ve yet to mention, was completely rebuilt in 1986.

Replacing the Shrodells Stand which had its last game against Manchester United on 3rd May 1986, the at the time new stand was converted to all-seating for a match against Notts County during the 1993-1994 season.

Below is a seating plan of Watford FC's Vicarage Road: 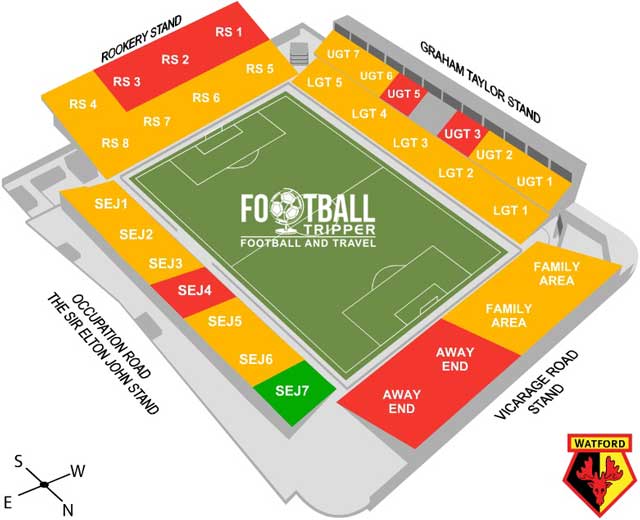 Away fans are housed within the Vicarage Road Stand which is located behind the northernmost goal end.

Shared with some home supporters who are separated by a gutter of empty, netted seats, the standard allocation usually amounts to around 2,200 tickets although if the occasion requires it, away fans can take over the entire stand.

A very basic single-tiered structure, the Vicarage Road Stand is certainly nothing spectacular but is made slightly more memorable however by the distinctive red and yellow sections of seating which adorn the benches.

Although not the most modern of stands, the roof is self-supporting which means views remain unrestricted throughout the allocation.

The biggest complaint amongst visiting supporters appears to be that the size of the concourse feels slightly inadequate when visiting clubs have a decent number of fans.

Most noticeable at half-time when a lot of fans rush to the use the toilets, this is however hardly endemic to the old stands of Vicarage Road!

The closest pub to Vicarage Road stadium is The Oddfellows which is located next to the eastern side of the cemetery on Fearnley Street.

Unsurprisingly it gets rather busy on matchdays but if you can there early and get in, you will find the service to be quite quick with an outdoor terrace section complete with barbecued food for sale.

Whilst not having quite the same atmosphere you can also venture into Watford Highstreet upon exiting the station.

There you will find a few pubs such as the large Wetherspoons known as Moon Under Water, a Walkabout and The Horns.

Right next to Watford High Street overground station there is a shopping centre which has a number of dining options such as Pizza Express, McDonalds and The Alibaba curry house.

The small parade of shops which line the pedestrianized walkway between Wiggenhall Road and Vicarage Road also provide further choice, with Fry Days one such as example of a local Chippy.

Watford’s club store at Vicarage Road is known as the Hornets’ retail outlet, and it certainly lives up to that name on match days when it becomes a hive of activity.

Whilst the Online Hornets Shop  is open 24 hours a day, the club shop has the following opening times:

Unfortunately for fans of the Hornets it would appear as if Watford FC aren’t currently offering stadium tours of Vicarage Road. Sorry.

How to buy Watford FC Tickets

Tickets to see Watford play at home can usually be purchased on the day of the match if the club are in the Championship, however for Premier League matches this isn’t often possible due to the high levels of demand.

Therefore the easiest way to purchase tickets is via Watford’s online ticketing system.

You can also purchase tickets ahead of home matches from the ticket office at the bottom of Occupation Road within the Rookery Stand, via phone (01923 223 023), or via email ([email protected]).

How to get to Vicarage Road

Where is Vicarage Road?

Situated next door to Watford General Hospital approximately 1 mile from the historic city centre of Watford, Vicarage Road falls under the county of Hertfordshire which is now regarded as being in north London.

There is no parking to be had around Watford FC’s stadium with the surrounding roads reserved solely for local residents, with the nearby Watford General Hospital also not permitting matchday parking.

The Hornets recommend that you check out the following car parks: Church Car Park nestled inside the ring-road opposite the turn off for Vicarage Road a popular choice, followed by the Royalty House on King Street, Watford Grammar School for Girls on Cassiobury Park Avenue and Fishers Industrial Estate off Wiggenhall Road.

The closest station to Vicarage Road is Watford High Street which is exactly half a mile from the ground with a walking time of no more than 10 minutes.

Technically this is a “London Overground Station” which means that whilst it may have decent connections in and out of the city, it may not be fully serviced with direct routes from the rest of the UK.

The journey by foot from here is likely to take you no more than 20 minutes at an average brisk pace.

All of your accommodation options are located back within Watford town centre with the usual suspects such as Jurys Inn, Best Western and Travelodge all running hotels within the local area.

The Premier Inn on water Lane is arguably the closest to Watford High Street overground station, although if you really want to make the most of your visit to London, book something more central.

Who plays at Vicarage Road?

What is the capacity of Vicarage Road?

As of 2023 Vicarage Road has an official seating capacity of 21,277 for Football matches.

When was Vicarage Road opened?

What is the postcode for Vicarage Road?

The postcode for Vicarage Road is WD18 0ER.

Covid Restrictions may be in place when you visit Vicarage Road in 2023. Please visit the official website of Watford FC for full information on changes due to the Coronavirus.