Turf Moor is the home ground of Lancashire based football team, Burnley F.C. Dating back to 1833 when the site was used as a cricket ground, the 21,940 capacity stadium today has developed significantly from when it originally consisted of just a single stand.

Burnley first moved into Turf Moor in 1883 after being invited to use a spare plot of land by Burnley Cricket Club who had occupied the site by themselves for over 50 years.

In the Claret’s formative years when the team was known as Burnley Rovers Football Club and they occasionally played rugby union, their home was at Calder Vale Ground.

With the exception of their Lancashire based rivals Preston North End, whose Deepdale Stadium holds the record, Burnley have occupied their football stadium for the longest period of time in England.

Needless to say Turf Moor has changed substantially over the years, and Turf Moor has come a long way since the first 800 capacity grandstand was built way back in 1885.

It wasn’t until the post-war period that the ground began to develop in the classic British mould, and Turf Moor could proudly boast four distinctive stands.

One of the most memorable of the period was the 1954 build “Longside” which was used to house both home and away supporters, and it was famously constructed by members of Burnley’s Youth Team – something that certainly wouldn’t happen today!

After the publication of the Taylor Report in 1990, Burnley were faced with no choice but to demolish their remaining terrace sections, and by September 1996 the ground was successfully converted to fully-seating.

Costing an estimated £5.3 million adjusted for today’s prices, the club lost a great deal more in sentimental value after the historic Bee Hole End and Longside were replaced.

Whilst some of the older fans may reminisce fondly about the olden days, Burnley as a club have adapted well to the modern era and have even gained promotion to the Premier League twice.

This is an impressive achievement for a club whose stadium has enough seats for 1 in 3 inhabitants of the town which goes to show the relative size of the club compared to rivals.

Below is a seating plan of Burnley FC's Turf Moor: 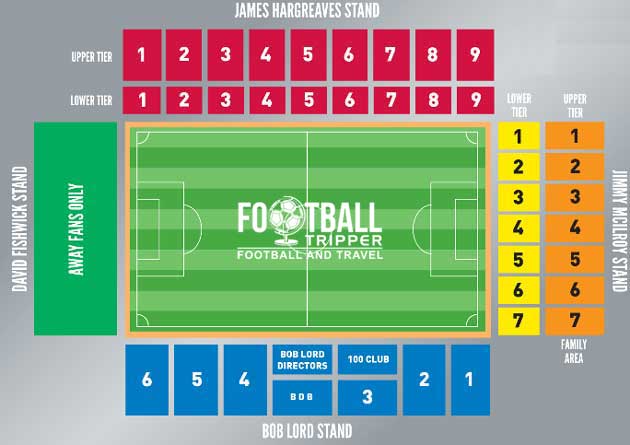 Away fans who make the trip to Turf Moor are housed within the David Fishwick Stand which lies on the Western side of the pitch behind the goal.

The standard allocation of around 3,931 doesn’t quite fill the entirety of the stand which is reserved solely for the travelling fans.

The number of tickets released can increase for higher-profile matches such as the Premier League and FA Cup however.

The position of the fans depends on how many are expected to attend with the club sometimes opting to place fans within either corner rather than in the middle.

This is presumably to negate the impact of the two large support beams which keep the roof from falling, although anywhere beyond the first little section of seating is unfortunately likely to have slightly restricted sight-lines.

As one of the older stands in the stadium, the facilities within David Fishwick had previously had a very poor reputation, with the state of the toilets leaving a lot to be desired in addition to the grubby nature of the concourse itself.

Thankfully it has largely been refurbished in recent years, with many now wishing that Burnley turn their attention to the seats in the stand which are still made from wood.

With Turf Moor located a reasonable walking distance from Burnley Central there are a good number of establishments which both sets of fans might want to drink from.

There are very few, if any truly “home supporters” only pubs, with the nearby Burnley Cricket Club welcoming home and away fans, including those clad in their team’s colours.

This is popular due to it’s cheap prices, decent atmosphere and onsite parking.

North of the ground no less than 10 minutes on Belvedere Road there is a large Brewers Fayre outlet known as The Queen Victoria which welcomes away fans. Billed as a “family-friendly chain”, there is a spacious bar and a certain familiarity if you have ever been to one of their other joints elsewhere in the country.

For those who prefer their real ale then you might want to get to Burnley slightly early and make your way to The Bridge Bier Huis (Dutch for “Beer House” in the centre of town. Listed in the CAMRA beer guide, it has up to six cask conditioned ales at anyone time, and combined with a trip to the nearby “Boot Inn” you should have plenty of choice.

If you are travelling into Burnley via train then there are a good number of “popular” fast-food restaurants such as McDonalds and Subway on hand, with too many to mention.

The main road leading to the ground, Harry Potts Way, is also lined with greasy choices with several independent chippies and Kebaberies ready to fill a hole.

Burnley’ operate two club shops in addition to their own official online shop, the Clarets Online Store.The opening times for both stores are as follows:

There is no official information regarding opening times on matchdays but it would be safe to assume that the stadium store will be upon before kick-off for all match days.

It doesn’t appear as if Burnley FC currently offer fans the chance to undertake a stadium tour of Turf Moor. If this changes, we’ll be sure to update this section.

How to buy Burnley FC Tickets

Tickets to see Burnley in the Championship are divided into two categories (Gold and Silver), whereas for the Premier League an additional Bronze tier is adding which results in three categories of pricing.

Tickets can be purchased either in person at the ticket-office, via phone 0871 221 1914 (opt 1), email [email protected] or most popularly online.

How to get to Turf Moor

Where is Turf Moor?

Turf Moor is located on Harry Potts Way less than half a mile from Burnley City Centre making it very accessible for visiting fans.

Turf Moor stadium’s address for satnav is as follows:

Actual club owned spaces are limited with the surrounding areas having parking restrictions match-days which are typically on Saturday and Tuesday.

The Club recommends the use of the following car park for both sets of fans:

Burnley is served by no less than three train stations: Burnley Barracks, Burnley Central and Burnley Manchester Road with the club suggesting that the latter is the closest to the stadium but my estimations put it at a joint distance of 0.9 miles with Burnley Central.

The walk will likely take you around 20 minutes from either station not including Burnley Barracks.

Hotels in Burnley are scattered around the town centre with the city lacking a nucleolus of accommodation options.

Back towards the city centre there is the Talbot Hotel which is close to Burnley Central Station.

If you want a hotel with good transport links and you have a car try the Premier Inn on the A671 or the Holiday Inn just off the M65 which is also fairly close to Burnley Barracks railway station.

Who plays at Turf Moor?

What is the capacity of Turf Moor?

As of 2023 Turf Moor has an official seating capacity of 21,940 for Football matches.

When was Turf Moor opened?

What is the postcode for Turf Moor?

The postcode for Turf Moor is BB10 4BX.

Covid Restrictions may be in place when you visit Turf Moor in 2023. Please visit the official website of Burnley FC for full information on changes due to the Coronavirus.