The ground based in the borough of Croydon has a capacity of 26,309 and has previously been home to both Charlton Athletic and the now defunct Wimbledon F.C through ground share schemes.

The site on which Selhurst Park stadium sits on today was originally a former brickfield owned by the Brighton Railway Company.

The inaugural match was played against Sheffield Wednesday and Selhurst attracted a crowd of 25,000, however the ground didn’t really develop until 1969 when The Eagles were promoted to Division One.

Anticipating an increased demand for tickets, Chairman Arthur Wait constructed a new stand, and added a second tier to the Whitehorse Lane End.

When floodlights were installed in 1953, Crystal Palace invited Real Madrid for a friendly, and unexpectedly the European powerhouse accepted.

The Galacticos’s first match in London, you could only imagine their shock when they saw the ramshackle stadium which greeted them at the time.

The 1980’s marked a period of financial turmoil for quite a few London clubs, and Crystal Palace opted to sell off the land around Whitehorse Lane Terrace to Sainsburys Supermarket.

Additional revenue was also generated through groundshare schemes which first saw Charlton move into Selhurst Park, followed by Wimbledon in 1991 after Plough Lane fell into a state of disrepair.

After the publication of the Taylor report which mandated that all top-flight stadiums become all-seated, Crystal Palace renovated the remaining terrace sections of their ground.

This included the addition of 48 executive boxes above the Whitehorse Lane terrace, and the construction of a new two-tiered Holmesdale Road Terrace in 1994.

Below is a seating plan of Crystal Palace F.C.'s Selhurst Park: 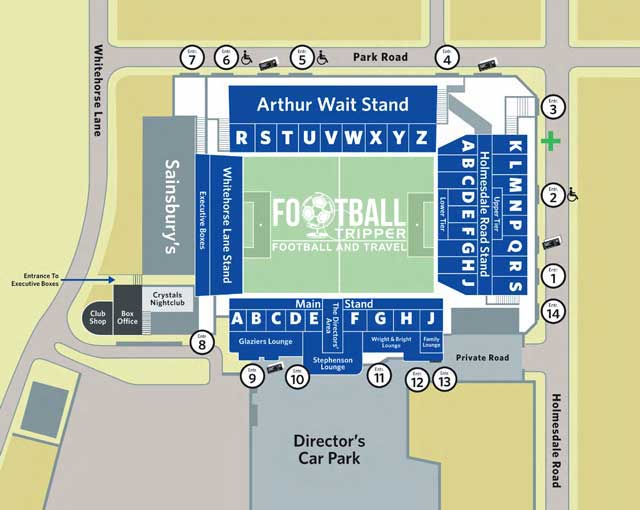 At Norwood Junction Railway the high street is blessed with a Wetherspoons called “The William Stanley” which can be reached by turning right at the prominent clock tower near the high street.

Across the road there is also a boozer called the “ship” which you may be a decent port of call if you’re looking to sink a few pints.

Similarly from Thornton Heath Station there is a decent sized Wetherspoons which welcomes a mix of home and away fans, known as “The Flora Sandes”.

Slightly further along the road away from the Tesco superstore is the Railway Pub which soaks up the overspill from the ‘Spoons pub well.

Inside the ground you can of course buy alcoholic beverages, however the club reserves the right to not serve alcohol to away supporters during certain matches.

As Selhurst Park is plonked right in the middle of a residential neighbourhood there isn’t an abundance of options around the stadium unless you’re looking for a Sandwich meal deal combo from the Sainsbury’s which occupies the space between the north and west stands.

Nearer Thornton Heath Station there are some independent chippies and kebab houses who fill a niche.

Crystal Palace operate a club shop at Selhurst Park which is open daily whether there is a match being played or not, in addition to their own official online store.

The opening times for the stadium store are as follows:

Stadium tours for Selhurst Park are run by The Study Centre at Crystal Palace and can be booked any time between 10.30 am and 3.30 pm in the afternoon although they are not available on matchdays.

Tickets for Crystal Palace in the Premier League fall into one of two pricing categories: A and B.

How to get to Selhurst Park

Where is Selhurst Park?

Selhurst Park is located in the London Borough of Croydon which is 8km south of central London.

The most straightforward way of getting to the stadium from central is via the overground train service as outlined below. There isn’t a tube stop unfortunately.

Selhurst Park Stadium’s address for satnav is as follows:

The streets around Selhurst Park are all residential in nature and can get quite busy on matchdays so it is advised that you allow yourself plenty of time in getting to the stadium.

Spaces by default are reserved for residents who have parking permits, however there are a number of pay and display machines nearby with a four hour limit.

The nearby Sainsbury’s car park has a slightly longer limit at four and a half hours, however it is strongly advised that you carefully check all relevant signs!

Like a lot of Stadiums in London, it is best to travel to Selhurst Park via train with there being a choice of 3 main stations:

The chances are you won’t be flying to see Crystal Palace unless the club gets into Europe, but for any international fans out there here are a list of the closest Airports in London:

There are no hotels directly near Selhurst Park.

The closest hotels are in the Croydon area, just south of the stadium one train station or a half an hour walk away.

If you expect to spend more time in London then you should get hotel more central and make your way to the stadium by public transport.

Who plays at Selhurst Park?

What is the capacity of Selhurst Park?

As of 2022 Selhurst Park has an official seating capacity of 25,486 for Football matches.

When was Selhurst Park opened?

Selhurst Park officially opened in 1924 and is home to Crystal Palace F.C.

What is the postcode for Selhurst Park?

The postcode for Selhurst Park is SE25 6PU.

Covid Restrictions may be in place when you visit Selhurst Park in 2022. Please visit the official website of Crystal Palace F.C. for full information on changes due to the Coronavirus.