Wembley Stadium located in Wembley Park, London, is the spiritual home of English football and historically it has always hosted the games of the national men’s team and the annual final of the F.A Cup. With a capacity of 90,000 it is the second largest stadium in Europe.

Wembley Stadium first opened on 9th March 2007 after a lengthy construction period of just under five years, with the inaugural competitive match held two months later in May between Chelsea and Manchester United for the 2007 FA Cup. Long associated with the world oldest football cup competition, the knock-out tournament’s final was previously played at Cardiff’s Millennium Stadium during the ground’s construction.

Costing an estimated £757 million to build, the ground was a behemoth of a project and faced much public scrutiny due to a series of delays and seemingly ever-expanding budget. With a capacity of 90,000 the stadium is the largest in England and second largest in Europe behind Barcelona’s Nou Camp.

Replacing the previous iteration of Wembley or The Empire Stadium as it was originally known was never going to be easy, and many fans initially expressed sadness that the iconic towers were not to be retained. Co-designed by Populous who designed The Emirates and iconic British architect, Norman Foster, the national stadium has received many plaudits from around the world since opening.

Wembley continues to host important football games such as the FA Cup Final and qualification matches of England’s National Team, and has even hosted two Champions League finals to date including an all German affair between Borussia Dortmund and Bayern Munich in 2013.

In recent years Wembley has continued to show off its credentials as a mulit-purpose arena by hosting NFL International games as well large music concerts and boxing matches. Whilst necessary to recoup the large cost of the stadium, it has often resulted in a sub-standard playing surface for football matches.

Below is a seating plan of England's Wembley Stadium: 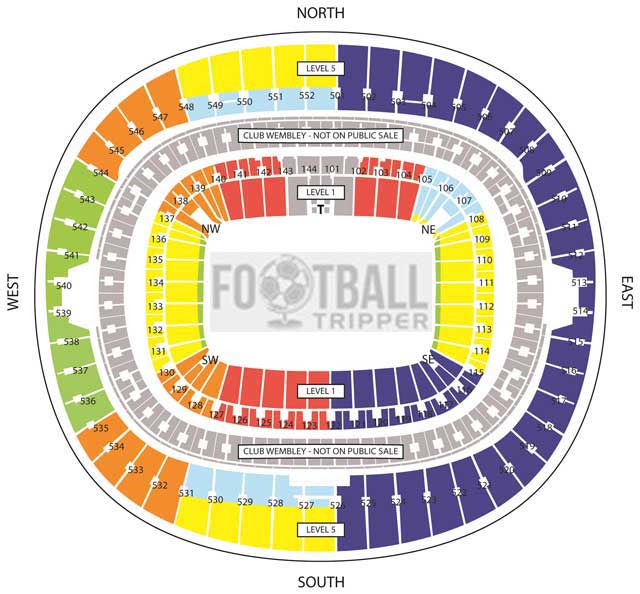 Wembley Stadium is a three-tiered bowl arrangement which is comprised of four sections: North (main stand), East, South and West.

There are half a dozen or so independent pubs to choose from when making your way to the stadium, and although they are all walkable within 20 minutes from each station, how you get to the stadium will probably dictate where you are likely to drink.

From Wembley Central south of the stadium there is JJ Moon’s which is owned by Wetherspoons, and The Green Man which describes itself as an “old-school pub”, whereas northwards from Wembley Park Tube Station there is The Torch and The Wembley Tavern.

Predictably these pubs get busy on matchdays, with some fans recommended grabbing a drink from the bars inside Moore Spice or at one of the several hotels nearby. Be advised that sometimes during domestic clashes you might have to walk around to find a welcoming venue as bars are often allocated to each team on the day.

Inside Wembley pints of Carlsberg and Tetley Bitter can be purchased from any of the 108 licensed bars for £4.70 each, however the alcohol sales policy can vary per match depending on the event hosted.

The number of places to eat from around Wembley Park greatly eclipses the number of places to drinks, with a McDonalds, Pizza Express and several Indian restaurants located on Empire Way. Between Wembley Central and Stadium Stations there is further choice with the likes of a Nando’s, KFC, Pizza Hut and even a Tescos.

In total there are a remarkable 688 places where you can purchase food and drink from both inside and outside of Wembley. Although there are too many food options in total to list, I have listed the most popular ones below for illustrative purposes.

The Stadium Store generally only opens on match days, however there is a nearby Nike Factory Store which sells some football goods and you can also purchase England merchandise 24/7 online from the official England Store.

Football fans from around the world can now see Wembley first hand when there isn’t a match on by undertaking a fully-guided 75 minute tour of England’s iconic  Stadium. Depending on what events are happening at the stadium when you visit, up to seven tours are usually conducted between 10.00 am and 4.00 pm each day.

Please note that you can also purchase a family ticket for two adults and two children costing £45.00, and groups larger than 25 receive a 15% discount.

To find out further information and to book your place please visit the official Wembley tour page.

How to get to Wembley Stadium

Where is Wembley Stadium?

England’s national stadium is located in Wembley Park which is an area belonging to the London Borough of Brent, north-west of the capital city’s traditional centre.

The address for Satnav is as follows:

Wembley Park contains over 3,000 car parking spaces and is regarded as the official car park of the stadium. Spaces can be booked in advanced online via Wembley Official Parking which conveniently lists all of the upcoming events, however the price remains contentious for some. For football matches cars can be charged up to £30.00 to park, which leads some to consider “unofficial” alternatives.

There are a number of cheaper independent car parking operators around the Industrial Estate as you get to Wembley Way which are much cheaper, however the locations aren’t as good and they require you to walk slightly further.

As for parking within the surrounding residential areas, it’s not advised unless you wish to receive a parking ticket or can borrow a local residents permit which would be highly unlikely.

There are two train stations close to Wembley: Wembley Central (2km away) and Wembley Stadium (0.5km), however which one you should take depends on where you are travelling from.

Wembley Central has regular overground train services from London Paddington and London Euston, however it is also served by the Bakerloo Line (brown) underground line. If you’re catching the tube it’s probably quicker to just go to Wembley Park station instead (See London Underground section below).

Wembley Stadium Station is generally for those who are arriving from outside of London although there are a small number of departures from Marylebone station. The main services are match-day ones run by Chiltern which serve the Midlands, Oxfordshire and Buckinghamshire.

There are numerous hotels to suit all budgets within close proximity to Wembley Stadium including the likes of Hotel Ibis, Holiday Inn and a Hilton. Slightly further away but still no more than 10 minutes away there is the budget friendly Quality Hotel London, and The Green Man Pub and Hotel.

Who plays at Wembley Stadium?

English side England play their home matches at Wembley Stadium.

What is the capacity of Wembley Stadium?

As of 2023 Wembley Stadium has an official seating capacity of 90,000 for Football matches.

When was Wembley Stadium opened?

Wembley Stadium officially opened in 2007 and is home to England

What is the postcode for Wembley Stadium?

The postcode for Wembley Stadium is HA9 0WS.

Covid Restrictions may be in place when you visit Wembley Stadium in 2023. Please visit the official website of England for full information on changes due to the Coronavirus.