The Allianz Arena or Fußball Arena München is a football stadium in Bavaria and is home to two Bundesliga clubs TSV 1860 München and more famously, Bayern Munich. The financial services company Allianz purchased the naming rights to the stadium for 30 years.

The Allianz Arena replaced the municipally owned Olympiastadion Munich in 2005.

The first official match held was a game between TSV 1860 Munchen and against FC Nuremberg.

For years FC Bayern wanted to build a purpose-built Football Stadium but  it wasn’t until Germany were awarded the World Cup in 2006 that the project gained momentum.

With Olympiastadion now unsuitable as an elite footballing venue, the two clubs formed a partnership with the city to create a new state-of-the-art stadium.

Financial services provider Allianz secured the naming rights to the new stadium from the moment it was built, with the large company taking an unprecedented step of signing a 30 year sponsorship deal.

When the stadium hosted four group matches, a round of 16 and the semi final between Portugal and France (0-1) for the 2006 World Cup, the stadium was officially referred to as the FIFA World Cup Stadium Munich due to sponsorship reasons.

The Allianz Arena is regarded as one of the most innovative stadiums in the world and is famous for its luminous exterior with the colours changing depending on who the opposition is.

If Bayern play it is Red, if 1860 Munich play it is blue and if it is the national team or a theoretically neutral game it remains white.

Below is a seating plan of Bayern Munich's Allianz Arena: 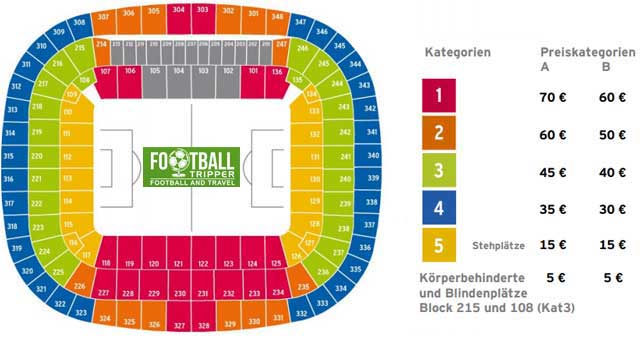 Allianz Arena is a modern stadium which has a continuous ring design which means each stand around the perimeter of the pitch is pretty much uniform in design:

For Champions League matches featuring Bayern München the standard allocation of tickets is 3,500, and the away section is usually located in the north stand in sections 340 to 347 which is up the third tier.

Although the section is technically the furthest back from the pitch views are excellent throughout due to the lack of support beams for the roof and relatively steep seating arrangement.

With the exception of European matches fans inside Allianz Arena and other German grounds can of course consume alcohol inside the stadium with pre-match pints normal behaviour for the majority of adult male supporters.

As the the two Munich club’s cater for the beer-swigging population themselves, and the ground is out of town there really aren’t any independently run boozers within the immediate environs of the Allianz.

Within the grounds of the stadium there is a moderate of choice of what to eat and drink before kick-off with the Arena Bistro (Open 10. 00 am to 6.00 pm), and your standard fast food stalls constituting your main choice of where to eat.

You could potentially get off a stop earlier at the Kieferngarten Metro stop and either walk to the stadium (20 minutes) or hop back on when you’ve finished exploring. Restaurants around this area include Pizzeria Fellini, Pizza Avanti Heimservice and Restaurant Mykonos Inh. Christos Katzanos.

Be advised that food and drink inside the stadium must be purchased from an ArenaCard which is basically a prepaid credit card! These can be purchase from multiple locations inside the ground.

Both Munich based clubs operate stores at the Stadium as outlined below as well as their own web based stores such as Bayern’s Fan-Shop and TSV’s 1860’s Online Store.

The “standard tour” lasts approximately for 1 hour and runs daily including Sundays and on National holidays except the big three of Christmas, New Year’s Eve and New Year’s Day.

How to buy Bayern Munich Tickets

You can purchase tickets online, or from one of 9 official club shops scattered throughout the city with the Allianz Megastore being the most prominent example. As one of the largest teams in Europe, Bayern Munich sell out almost every home match and it can very difficult, or nigh on impossible to secure tickets without going through a reseller.

Tickets to see 1860 Munich are much more easy to buy than their cross-town rivals Bayern due to their smaller fanbase and less appeal nationally.  The cheapest tickets start at €14.00 for something standing, €19.00 for a seat behind the goal and around €38.00 for something within the main stand.

How to get to Allianz Arena

Where is Allianz Arena?

The Allianz Arena is located towards the North of Munich in a relatively green area albeit industrial area, around 12 km kilometres from the historic city centre. Most supporters catch the Tram (U-Bahn) as outlined below.

The out of town Allianz Arena is very accessible by automobile as it lies adjacent to both the A9 and A99 stretches of the Autobahn motorway.

At the ground there is the largest football stadium carpark in Europe with approximately 9,800 spaces.

You must pay upon exiting the car parks, and the exit barriers require you to pay the €10.00 parking cost via the ArenaCard which can either be purchased from the stalls as you enter the turnstiles and inside the concourses at the stadium.

The largest train station is Munich is known as München Hauptbahnhof which is one of three long distance stations in the city which gives you an idea of its sheer size (Others are München-Pasing and München Ost).

The station serves over 450,00 passengers a day and has direct connections to both German and European cities, making a weekend trip to Munich much more viable for time strapped travellers.

As a large city you can count on the city of Munich to be well connected to the rest of Europe and the World, and Munich International Airport (Flughafen München) serves the region of Bavaria as the largest airport and holds the distinction of being the second largest in Germany with over 38.7 million passengers served in 2013 alone.

Located approximately 29km Northeast of Munich near to the city of Freising, the airport has decent ground transportation with S-Bahn lines S1 and S8 taking you to the city in just under 45 minutes, in addition to the MVV line 635 bus service which can take you to the nearby train station of Freising which grants you more choice of destination.

The closest and only really walkable hotel from the Allianz Arena is the Arena Stadt München which is around 20 minutes walk towards Kieferngarten U-Bahn station.

The other hotels fairly nearby to the stadium are in the small towns of Ismaning and Garching, both of which require either a car or taxi which means you’re probably better off catching the metro back towards Munich city centre where there are lots more options to choose from.

As Munich is a massive city there are way too many districts and options for me to go through so all I’ll do is give you a few options near the main train station (München Hbf). These are Hotel Ibis, Euro Youth Hotel and Regent Hotel.

Who plays at Allianz Arena?

What is the capacity of Allianz Arena?

As of 2023 Allianz Arena has an official seating capacity of 75,024 for Football matches.

When was Allianz Arena opened?

What is the postcode for Allianz Arena?

The postcode for Allianz Arena is 80939.

Covid Restrictions may be in place when you visit Allianz Arena in 2023. Please visit the official website of Bayern Munich for full information on changes due to the Coronavirus.