St. Jakob-Park is a football stadium located in Switzerland’s third most populous city of Basel. With a capacity of 38,512 it is the largest ground in the Swiss League having been renovated for the Euro 2008, and it is currently home to FC Basel 1893.

St. Jakob-Park is the name of FC Basel’s current home ground which replaced the club’s former stadium, slightly confusingly known as St. Jakob Stadium. The previous stadium first opened in time for the 1954 World Cup, and was famous for hosting four Cup Winners’ Cup finals but by the 1990s it was beginning to show its age.

Built on exactly the same plot of land, FC Basel temporarily located to the small Stadion Schützenmatte whilst the new St. Jakob-Park was constructed.

Known to local fans as “Joggeli”, FC Basel’s stadium is the largest in Switzerland with the stadium designed by famous Basel based architects, Herzog & de Meuron.

Costing an estimated €143 million euros to build in 2001, the stadium’s exterior featured a translucent outer layer which was capable of being illuminated in different colours depending on the need of the event – a feature the architects later reused when designing Munich’s iconic Allianz Arena.

With Austria’s Ernst-Happel Stadion designated to host the final, FC Basel’s stadium hosted all of the Swiss matches, the opening ceremony and tournament curtain-raiser between the home nation and Czech Republic.

After the tournament had finished the extended capacity of 42,500 was reverted back to the a number closer to the original size, although it did increase by around 5,000 seats.

The original capacity was 33,433 and today the capacity sits at 38,512 although it is very unlikely that this number will increase for the foreseeable future as FC Basel only tend to sell out a few fixtures per season such as Champions League matches.

Below is a seating plan of Basel's St. Jakob-Park: 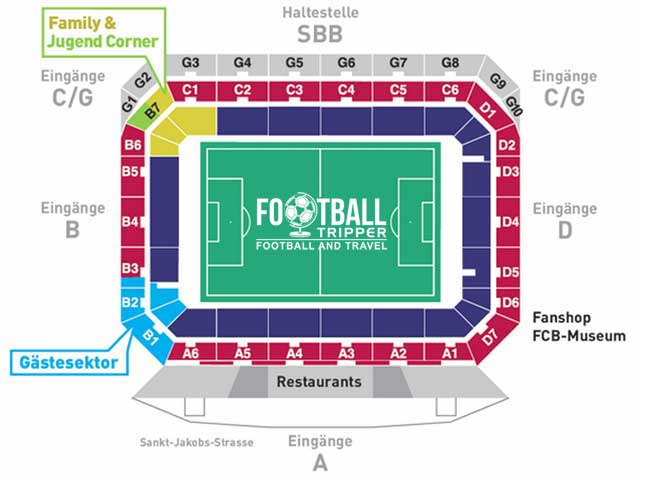 Away fans are housed within the south-west corner of the stadium in a section known as “Gäste-Sektor” which literally translates as Guest Sector. Divided across two-tiers, the area for away fans is usually labelled as B1 and B2.

Away ticket prices are usually set at a flat €25.00, however they can be slightly more expensive for high profile Champions League matches.

FC Basel operate a large Fan Shop at the stadium in addition to their own  FCB Web store. Situated east of the stadium, it is usually open for two hours before kick-off, and until about one hour after the full-time whistle has gone.

Private tours of FC Basel’s iconic St. Jacob Park are available daily between 8.00 am – 8.00 pm with the exception of matchdays and when the stadium is hosting concerts.

Lasting approximately 75 minutes, tours are available in English, German, French and Italian, and depart from Section A on the 1st floor of the main stand.

How to buy Basel Tickets

Tickets to see FC Basel play at St. Jakob Park can be purchased from the fan shop at the stadium, at the Markus Vogel Fan Shop at the Station SBB (Küchengasse 16, 4051), or in some cases online from third party sellers.

The prices below represent the typical price ranges you can expect to pay when purchasing a ticket:

How to get to St. Jakob-Park

The sat-nav address for the stadium is as follows:

There are an estimated 680 parking spaces directly at the stadium itself, and a further 1,465 next to St. Jakobshalle.

The main railway station of the city is known as Basel SBB, and it is located 3.0km west of St. Jakob’s Park stadium.

Whilst the walk can be done in just under 40 minutes, it’s much easier to catch the tram directly to the ground which has a dedicated station known as “St. Jakob”.

From Basel BB Railway Station catch Tram 8, 10 or 11 to “Aeschenplatz” which is one stop away, and then transfer to Tram 14. This will take you directly to FC Basel’s Stadium via the aforementioned “St. Jakob” station.

EuroAirport Basel-Mulhouse-Freiburg is the closest international airport to the city of Basel in Switzerland. Technically located in France, approximately 2.2 miles north-west of the city, it acts as a hub for low-cost carriers such as easyJet Switzerland and Belair.

Upon landing you can catch bus number 50 to “Bahnhof SBB” in just under 20 minutes which will then allow you to catch a tram (8, 10 or 11) directly into Basel city centre.

As there are few hotels within the immediate vicinity of St. Jakob Park’s stadium you’re better off looking back towards the city centre. There are a number of affordable options around Basel SBB Railway station such as Hotel Ibis, Hotel Citty Inn and Hotel Helvetia. These are well placed for travelling to the ground.

Who plays at St. Jakob-Park?

Swiss side Basel play their home matches at St. Jakob-Park.

What is the capacity of St. Jakob-Park?

As of 2022 St. Jakob-Park has an official seating capacity of 38,512 for Football matches.

When was St. Jakob-Park opened?

St. Jakob-Park officially opened in 2001 and is home to Basel

What is the postcode for St. Jakob-Park?

Covid Restrictions may be in place when you visit St. Jakob-Park in 2022. Please visit the official website of Basel for full information on changes due to the Coronavirus.