Stadion Letzigrund is a multi-purpose sports stadium which is home to two Swiss League football teams: FC Zürich and Grasshopper Club Zürich. Located within the largest city in Switzerland, the ground which first opened on the 30th August 2007 is primarily used for football and athletics competitions.

Stadion Letzigrund first opened in November 1925 when FC Zürich worked in conjunction with the local city council to build a brand new sports arena which could host both football matches and athletic competitions. During the Great Depression of the late 1930s, the stadium’s ownership transferred completely to the city of Zürich and it has remained this way ever since, with the football club becoming long term tenants.

As one would expect with a stadium first opened in the early 20th century, Letzigrund has undergone several redevelopments over the years with the most recent and significant renovation occurring over a two year period between 2005-2007. Stadion Letzigrund was completely rebuilt for the Euro 2008 Championships which were co-hosted by Switzerland and neighbours Austria.

The inaugural football match at the new 30,930 capacity venue was held on September 23 with FC Zürich taking on Grasshopper Club Zürich in the local derby, with the ground used for the 2007/2008 season in preparation for the international tournament.

During the Euro 2008 Stadion Letzigrund hosted three Group C matches including the Netherlands V Romania. After the tournament the capacity was reduced slightly to 25,000 seats resulting in spectators receiving a little extra breathing space and leg room.

Currently both Zürich based teams reside at the stadium as Grasshopper Club Zürich are currently exploring the possibility of locating to a new purpose built football stadium without a running track. Given the working title of Stadion Zürich, their former home Hardturm was demolished in 2008.

Below is a seating plan of Grasshopper & Zürich's Stadion Letzigrund: 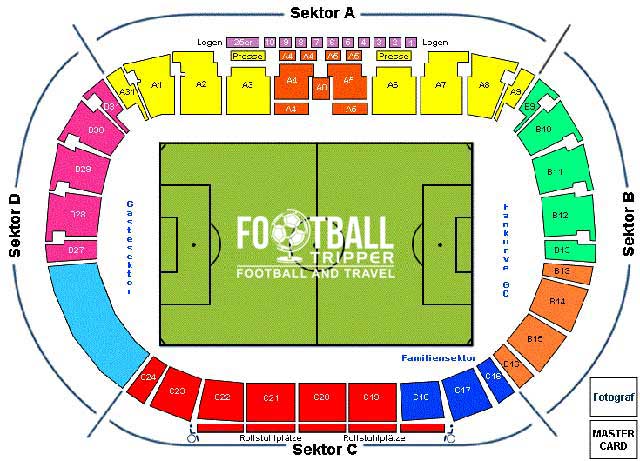 Away fans are usually housed within the eastern side of the south stand which is marked by the blue block (24-27) in the above seating plan. Known as the Curva Ospiti which literally means guest stands, entrance is granted through the gates around Sektor D.

The Oval Restaurant is open to the public Monday to Friday during the week between 11.00 am and 3.00 pm.

Whilst there aren’t any permanent club shops at the municipally owned Letzigrund, you can purchase official merchandise of both Grasshoppers and FC Zurich from various kiosks and vendors around the ground on matchdays.

Alternatively you could check out Grasshopper’s Online Store or visit FC Zurich’s club shop in person located at Werdstrasse 21 8004.

It doesn’t appear as if guided tours of the facilities at Stadion Letzigrund are available, however football fans can visit parts of the stadium during the week between 11.00 am – 3.00 pm including the Oval Cafe and Restaurant.

How to buy Grasshopper & Zürich Tickets

The ticket offices at Stadion Letzigrund are usually open for up to 90 minutes before kick-off for both FC Zurich and Grasshopper so if you couldn’t purchase tickets online then don’t worry too much.

Please note that the above prices are for illustrative purposes only and will likely vary depending on A) Which team you are seeing, and B) Who the opposition is.

How to get to Stadion Letzigrund

Stadion Letzigrund is located 3.5 km west of central Zürich within the Altstetten district which was previously its own municipality merging in 1934.

Although there is an underground carpark at Stadion Letzigrund it is strictly off limits to the general public on matchdays with fans instead encouraged to follow the signs for event parking once they arrive.

The three most popular matchday car parks are: Letzipark Shopping Centre (5 minutes away), Mediacampus (1 minute away) and the Park and Ride scheme at Altstetten Railway Station.

The city of Zürich is blessed with numerous train station with Zürich Hauptbahnhof being the largest and most important railway hub in Switzerland which ensures you are well connected to the rest of Europe.

Zurich Airport 12 km north of Stadion Letzigrund is of course the nearest International Airport available to Football Trippers. Upon landing you can transfer into the city centre via the Zürich S-Bahn in no more than 15 minutes.

The closest hotel to Stadion Letzigrund is undoubtedly the Ramada which is a stones throw away across the Badenerstrasse so the south of the ground.

Second to this is the area north of the stadium around Zürich Hardbrücke which is a hotbed of hotels including a Ibis, Novotel and Senator.

Following the direction of the tram eastwards back towards the city centre there is an abundance of places to stay particularly on the western bank of the River Limmat. This is pretty much where the night-life of Zurich is!

Who plays at Stadion Letzigrund?

What is the capacity of Stadion Letzigrund?

As of 2023 Stadion Letzigrund has an official seating capacity of 25,000 for Football matches.

When was Stadion Letzigrund opened?

What is the postcode for Stadion Letzigrund?

The postcode for Stadion Letzigrund is 8048.

Covid Restrictions may be in place when you visit Stadion Letzigrund in 2023. Please visit the official website of Grasshopper & Zürich for full information on changes due to the Coronavirus.