AFG Arena is a 20,000 capacity multi-purpose stadium located in the historic Swiss town of St. Gallen. Used primarily for football matches since it opened in 2008, the ground is home to local side Football Club St. Gallen 1879 and occasionally hosts international fixtures.

AFG Arena first opened in 2008 replacing St. Gallen’s former Espenmoos Stadium which first opened back in 1910 with three out of four of the remaining stands having since being demolished.

Constructed over a period of 3 years starting, the near 20,000 capacity ground’s inaugural match was an international friendly between Switzerland and Liechtenstein on the 30th May 2008 in a warm up for Euro 2008.

AFG Arena’s inaugural season mostly involved hosting matches of the Challenge League with the first game of the season drawing St. Gallen against FC Concordia who are based in Basel. Costing an estimated € 220 million some of the costs were recouped when the naming rights were sold to AFG Arbonia-Forster-Holding in 2006.

Currently the ground has a capacity of 19,568 but for UEFA sanctioned matches this is reduced slightly to around 17,317 as the terracing must be converted to seating, which is less space efficient. The all-seating arrangement was used during the 2013-2014 season when AFG Arena hosted Valenica, Swansea and Kuban Krasnodar in the Europa League Group Stages. 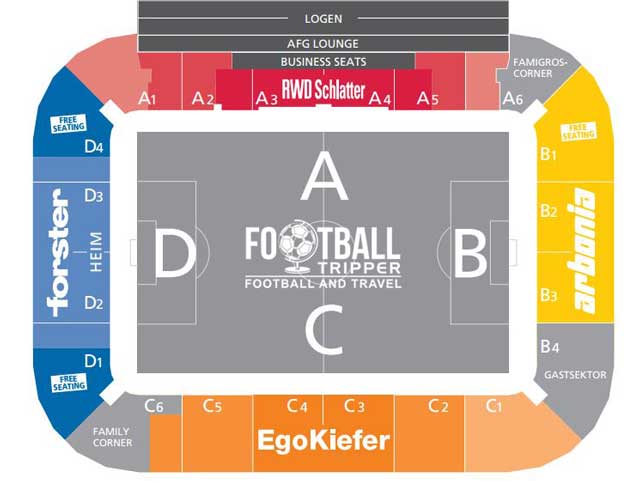 The AFG Arena is comprised of four stands: North, East, South and West.

Away fans are housed within the south-eastern corner marked as shown in the above seating plan by the B4 “Gastsektor”. This yellow stand is referred to as Osttribüne and is technically named after sponsors arbonia.

FC St.Gallen operate a club shop at AFG Arena in addition to their own online store which allows you to browse merchandise 24/7 from the comfort of your own home.

On matchdays the stadium fan shop opens two hours before kick-off and for up to half an hour after the full time whistle.

Although very much a commercial stadium it doesn’t appear as if tours are currently available of AFG Arena. Perhaps this will change at some point in the future although we’re only guessing.

How to buy St Gallen Tickets

Tickets to see St.Gallen in action at their splendid new home can either be purchased online, or in person at the stadium.

Please note that ticket prices increase by 5.00 CHF each if purchased before kick-off on the day of the match, and therefore it makes the utmost of sense to book in advance where possible.

How to get to Kybunpark

AFG Arena is sandwiched between the town of Gossau 4.6 km to the west and St Gallen which is 6.0 km east in an out of town shopping centre.

The underground car park has enough spaces for up to 1,100 vehicles with the adjacent car park open on matchdays offering fans another 200 spaces. Both are paid.

The retail park and AFG Arena can be reached from the city centre by taking the S1 Commuter Train service from St. Gallen Station.

The surrounding area is served by a limited extent to St. Gallen–Altenrhein Airport which means that the International Airport in Zurich 100 km or so away is instead the preferred choice of travellers.

Upon landing you can then catch a InterCity rail service from Zurich International to St. Gallen railway station.

Within the retail park the three star Hotel Newstar provides the only real choice, with the remaining accommodation options found back towards the St. Gallen train station.

Swiss side St Gallen play their home matches at Kybunpark.

What is the capacity of Kybunpark?

As of 2023 Kybunpark has an official seating capacity of 19,694 for Football matches.

Kybunpark officially opened in 2008 and is home to St Gallen

What is the postcode for Kybunpark?

The postcode for Kybunpark is 9015.

Covid Restrictions may be in place when you visit Kybunpark in 2023. Please visit the official website of St Gallen for full information on changes due to the Coronavirus.