Stade de Genève or Stade de Servette, is a multi-purpose stadium in Geneva, Switzerland, which first opened in 2003 in anticipation of Euro 2004. The stadium is capable of seating 30,000 supporters and is one of the most modern in central Europe.

The inaugural match at Stade de Genève was played on 16th March 2003 in front of a capacity crowd of 30,000. The opening match saw resident side Servette FC take on BSC Young Boys in a evenly contested 1-1 draw.

Designed and built by Zschokke Construction S.A (later renamed to Implenia) over the course of three years, the total cost of the stadium was reported to be in excess of 240 million Swiss Francs.

Multi-purpose by design, the stadium has on occasion hosted Rugby Union matches including a Heineken Cup game between Bourgoin and Munster during the 2006/2007 season. Since 2014 it has also hosted the annual Winter Classic Ice Hockey match which has attracted sell-out crowds of 29,400.

Nevertheless, Stade de Genève continues to host football matches the majority of the time, even being known as Stade de Servette amongst supporters of the local side.

During Euro 2008 which which Switzerland co-hosted with Austria, Geneva Stadium hosted three matches in total, all of Group A. The most thrilling match was undoubtedly the final group game between Turkey and Czech Republic (3-2) which decided who would progress to the next round.

Below is a seating plan of Servette FC's Stade de Genève: 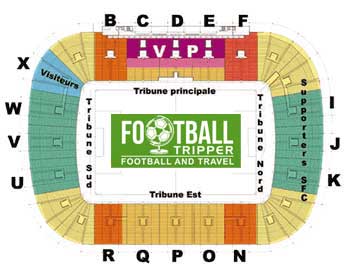 For the league matches of Servette FC Away fans are housed within section X within Tribune Sud aka the South Stand. Located within the south-west corner of the stadium, views are impeccable as you would expect from a modern stadium.

Although you should be able to purchase official merchandise of Servette FC on matchdays, it doesn’t appear as if there’s a club shop at the stadium which is open during the week.

Instead it is recommended that you check out Servette’s official webstore instead.

Stadium tours last for approximately 60 minutes, cover every conceivable area of the ground including the pitch itself and cost just 15 CHF for adults, and 10 CHF for everyone else.

How to buy Servette FC Tickets

Tickets to see Servette FC in action a Geneva Stadium can either be purchased online in advance of the match or from the stadium’s ticket office from around 1 hour before kick-off.

How to get to Stade de Genève

Where is Stade de Genève?

Geneva Stadium is located 4km south of central Geneva around the area where the Rhone Riva opens up into the Leman Lake.

There is free parking to be had at “Parking M’Parc La Praille” whereas “Parking du Centre Commercial de La Praille” at the stadium will cost you a few francs.

The closest train station is Lancy-Pont-Rouge which is connected to Genève-Sécheron in the city centre via the R line.

Geneva Airport is located less than 4 km north-west of the city centre and is home to numerous international flight carriers including easyJet, British Airways and Swiss Air Lines.

Upon landing you can either catch the train to Geneva-Cornavin Station or hop on the any number of the local buses. When you go through customs there is a machine which gives you a free ticket valid for the next 60 minutes which is pretty cool!

Within the adjacent shopping centre there is a Ramada Encore Hotel, however with its out of town location and expensive price, you’re better off choosing something back within Central Geneva where there are more varied choices.

The Hotel Ibis, Hotel Windsor and Hotel Les Nations are all within walking distance of the station and are all similarly priced to the local hostel which speaks volumes about the city of Geneva!

Who plays at Stade de Genève?

What is the capacity of Stade de Genève?

As of 2022 Stade de Genève has an official seating capacity of 30,084 for Football matches.

When was Stade de Genève opened?

What is the postcode for Stade de Genève?

The postcode for Stade de Genève is 1211.

Covid Restrictions may be in place when you visit Stade de Genève in 2022. Please visit the official website of Servette FC for full information on changes due to the Coronavirus.