The Red Bull Arena Salzburg is a football stadium located in the Wals-Siezenheim district of Salzburg. Officially opened in 2003, the 31,895 capacity ground is of course home to Red Bull Salzburg although for certain matches such as those sanctioned by UEFA, the club and stadium are known as FC Salzburg and the EM Stadion respectively.

The Red Bull Arena first opened back in March 2003 under the original name of Stadion Wals-Siezenheim with a capacity of just 18,250. The global energy drink manufacturer was yet to take over the club and thus the stadium was financed with the assistance of the Austrian government who invested roughly one third of the total 70 million euro cost in partnership with two Salzburg private companies responsible for the construction and land acquisition respectively.

Not to be confused with the Red Bull Stadiums in Leipzig and New Jersey, the club which was founded  in 1933 through a merger of FC Rapid Salzburg & Hertha FC Salzburg, greatly benefited by UEFA’s decision to award Austria & Switzerland the 2008 European Championship. Local Governor Franz Schauberger explored the potential to expand the former home of Lehener Stadium but with a starting capacity of just 5,300 the stadium was deemed too small.

Unsure whether or nor the country’s bid to host the competition would be successful, the new ground was implemented across two distinct phases with the initial opening in 2003 restricted to a capacity of 16.850 across a single tier of seating. The second phase which started in 2005 after confirmation of hosting, concerned upgrading the facilities such as under soil heating and television displays to a “world class level” in tandem with the addition of the new tier of seating.

Opening in 2007 with a newly raised roof and increased capacity to just under 30,000, a curtain raising friendly match against Arsenal F.C was held to break in the new facilities ahead of the tournament next year. Elected to host three group D matches, the arena was referred to as the Wals-Siezenheim-Stadion throughout the tournament due to UEFA’s policy on neutral sponsorship.

The matches hosted featured Sweden, Russia, defending Champions Greece and eventual winners Spain in what proved to be the spark which ignited their global footballing dominance.

Below is a seating plan of Red Bull Salzburg's Red Bull Arena (Salzburg): 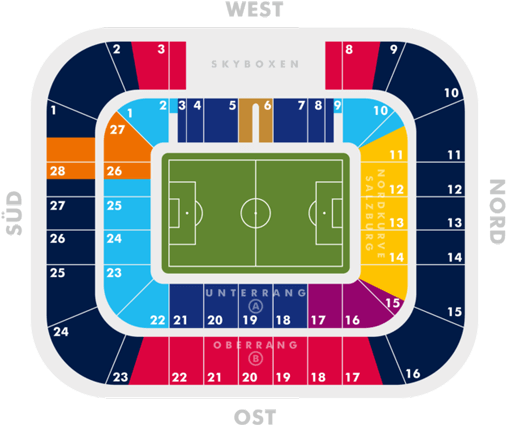 Away fans are housed within two sections of the Southern goal end, with sections 26 and 27 within the lower tier close to the south-west corner, and section 28 located above within the upper section. Known as the “Gäste Sektor” which literally translates as “Guest Section”, it is represented by the colour orange on the seating plan located above

RB Salzburg operate a club store known as the “Bull Shop” at the stadium towards the eastern stand, a merchandising kiosk towards the west of the stadium on matchdays, and their own online store. which is open twenty four hours, seven days a week.

Tours of the Red Bull Arena are available at 10.00 am on Saturdays whenever there isn’t a home match being played, and cost just €4.00 per person.

Lasting approximately 90 minutes and conducted in either German or English, you must register your interest via this online form by Wednesday at the latest for each week.

Tickets to see Red Bull Salzburg play at home can either be purchased online from the official site where you have the option of printing them at home, or in person at the “Ticketing and Service Center” which is located at the eastern side of the Red Bull Arena. Be warned however that purchasing on the day increases the cost of each ticket by €2.00!


The above prices are based on standard matches. For category II matches please add €4.00 to the price of an adult ticket, €3.00 euros to any reduced price ticket. Children’s prices remain the same however.

How to get to Red Bull Arena (Salzburg)

Where is Red Bull Arena (Salzburg)?

The Red Bull Arena is located in the municipality of Wals-Siezenheim which is on the outskirts of Salzburg city centre.

The stadium’s satnav address is as follows:

For a complete list of car-parks next to the Red Bull Arena please check out this parking map.

The main railway station known as Salzburg Hbf is located within the city centre 4.1km east of the Red Bull Arena.

The closest train station to the ground however is Salzburg Taxham Europark, which can be reached in just under 10 minutes from the city centre’s S3 Line via Salzburg Hbf, leaving fans with a more manageable walk.

Providing that you have a valid match ticket, public transport within the federal region of Salzburg is free for 6 hours before kick-off until the last services of the day. This makes taking either the train or bus very convenient on matchdays.

The city is served by Salzburg International Airport which is also named after W.A Mozart, the famous Austrian composer. Situated just under 6.00 km from the city centre towards the south-west, you can catch a trolley bus to the heart of Salzburg in approximately 25 minutes.

Unless you have a car you will find the majority of hotels to be found back within Salzburg city centre. Generally quite an expensive city, you can find one or two modestly priced hotels around the main railway station such as the Austria Trend, Hotel Hofenstauffen and Lasserhof.

What is the capacity of Red Bull Arena (Salzburg)?

As of 2023 Red Bull Arena (Salzburg) has an official seating capacity of 31,895 for Football matches.

What is the postcode for Red Bull Arena (Salzburg)?

The postcode for Red Bull Arena (Salzburg) is 5071.

Covid Restrictions may be in place when you visit Red Bull Arena (Salzburg) in 2023. Please visit the official website of Red Bull Salzburg for full information on changes due to the Coronavirus.